Well, this came out of left field, folks. Super Fighter Team is localizing and publishing developer Masaya’s 1992 turn-based strategy/RPG Vixen 357 for the Sega Genesis/Mega Drive.I actually have the import Japanese version here, but other than about an hour of messing around with it many years ago, I haven’t really dove into the game because my Japanese is quite terrible and usually involves a lot of looking stuff up and figuring things out as I go. Well, it looks as if sometime later this year I’ll be able to fully enjoy this somewhat unknown tactical gem thanks to SFT’s Brandon Cobb, who I should probably interview again at some point on they hows and whys of this latest production.

Pre-orders for the game will run you $63 in the US and $70 everywhere else and yes, that cost includes shipping. Oh, and the game cartridge, manual and a sturdy cardstock box. Yes, I did place a pre-order and if you’re interested, so should you, as this one’s guaranteed to sell fast. I can think of a few folks who’ll also be on this newest SFT release in a heartbeat, so I’m hoping we’re all happy campers in front of out respective TV’s when this sly Vixen finally ships out sometime this year.

If you’re a huge enough fan of the Atari Lynx but missed out on its first original boxed (online) retail game in years, well guess what? ZAKU is back! Super Fighter Team has heard the pleas from Lynx collectors worldwide and is reissuing the instant classic for a final time in a 400 copy run.

Just go click on that link above and get that wallet out. Or you can read my old review as you click on that link to BUY THE GAME. Whatever you’re going to do, you better do it FAST, as this is guaranteed to sell out ridiculously quickly.

Fans of Super Fighter Team are more than likely pretty pleased and having a Happy New Year plying some nostalgic fun as the two Mega Drive/Genesis titles Magic Girl and Cascade announced early in 2015 have finally shipped out to buyers and the return of Beggar Prince, Legend of Wukong and Star Odyssey means those most asked for titles will finally be re(or re-re)-released at some point this year.

As usual, HUGE Props to Super Fighter Team head honcho Brandon Cobb for fighting the good fight and getting these games out his way in this day and age of plenty of beauty pack reissues of the not so legal sort getting snapped up by collectors in record time. SFT’s small but solid library of console titles make for perfect entry level collector purchases as well as great gifts for your favorite classic gamer.

If your budget is lower but you still want to surprise someone (or give yourself a gift), you can drop $20 on the cool RPG Trifecta Pack and get three of those games digitally for your PC and save a chunk of cash. Isn’t freedom a wonderful thing? Yeah, I thought so. 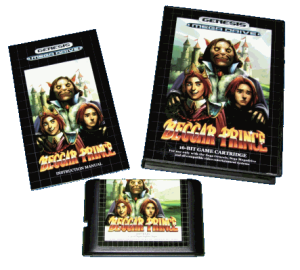 Well. It’s been quite the week or so for retro game news in terms of 16-bit Sega games making a comeback. Pier Solar HD is headed to (some) modern consoles, It Came From The Desert is finally arriving on the Sega Genesis later this year and now, Super Fighter Team is finally bringing back a retail edition of Beggar Prince, one of its most popular titles.

Developed by C&E, Inc., this turn-based RPG was initially a Taiwan-only release back in 1996 until Super Fighter team took notice of it and localized, debugged, and partially reprogrammed the game in order to bring it to audiences worldwide. The game’s low print run sold out and of the games the company has released since, this one’s been the most requested for reissue status.

While the game is currently available as part of the excellent RPG Trifecta Pack digital download, collectors have been clamoring for a physical reissue for years and now they have the opportunity to snap this up at a mere $63 (US) or $70 (international). Considering the price of the original game is now in the hundreds of dollars and Super Fighter Team doesn’t see a penny of those resales, finally getting the game out as a reissue is a great thing. I know a certain SegaDude will be dancing around his room when he gets this news…

EDIT! Oops. I was so excited that I forgot to mention the other cool games SFT has for sale: Magic Girl and Cascade are still up for pre-orders on the Genesis/Mega Drive and Nightmare Busters is getting a second go-round of orders for you Super Nintendo/Super Famicom fans. GET THEM BEFORE THEY’RE GONE!

Hot on the heels of releasing Nightmare Busters the first new Super Nintendo game in many years, Out of the blue, Super Fighter Team has announced not one, but TWO upcoming Sega Mega Drive/Genesis games have become available for pre-order with a 2015 release in the cards. I woke up (late!) to this news, so I’m still pinching myself to see if I’m awake. OUCH. Yes, it’s true!

More below the jump (OUCH)… END_OF_DOCUMENT_TOKEN_TO_BE_REPLACED

Super Fighter Team has been quite quietly busy these days, what with Nightmare Busters getting ready to ship out for the Super Nintendo soon (and yes, it’s simultaneously awesome and hilarious in the best possible manner to be typing this in 2013), but there are also some nice surprises you can grab for free that should greatly interest fans of classic 2D arcade fighting games.

Super Fighter Special Edition, a VERY nicely reworked version of the ancient PC fighter and Sango Fighter 2 are up and downloadable now, so if you’re into fighters, LOVE big, colorful animated sprites and wonderful pixel art backgrounds, yup, you’re already clicking away and getting yours I bet. Additionally, you can check out some music from Super Fighter HERE – it’s another pretty cool bonus that will get your ears grinning while you’re waxing nostalgic over either game’s old-school charms…

Yeah, yeah… I a bit late in picking this awesome deal up (it was released on August 6), but the RPG Trifecta Pack is all mine and I just saved a few hundred bucks in the process by not tracking down the out of production cart versions. Granted, the collector in me still wants to shell out for the two Genesis RPGs I’m missing from Super Fighter Team (I already have one of the few hundred copies of Star Odyssey here in the library), but this set will most certainly do.

Amusingly enough, if you happen to be the owner of a creaky PC from the last century, guess what? All of the games will actually run on any system with the following operating systems: Windows 8, 7, Vista, XP, ME, and 98SE (which is amazing but not unexpected, given emulation works well on any modern PC). Mac users? Well, you’ll need Mac OS X 10.5 and above. I don’t own a Mac, so I have no clue if that’s good, bad or ugly, but if you’re jumping up and down at home or the office, it’s all good. OK, I need to shut up and get downloading. Well, it’s only a 4MB file, so it’ll be quick, even on a crappy dial-up connection. Of course, I won’t get to PLAY any of these three until I whittle down my backlog here, so I guess this is an early holiday gift for myself – whee!

Usually, I save my biggest double-takes and jaw-drops for this time of year because of E3’s more surprising reveals, and yes there were a few doozies that put me in some poses most publicly shameful (or as shameful as one can look while watching a company dismantle its competition with a single internet video that crushes that competitor’s master plans). However, In the middle of all this E3 news and it’s talk of “interactively aggregate competitive materials” (Thank you, Corporate B.S. Generator!), thank goodness Super Fighter Team is on the case to keep me sane (but still picking up my jaw and eyeballs off the carpet)… END_OF_DOCUMENT_TOKEN_TO_BE_REPLACED

After 20 long years one of a handful of “lost” Sega Genesis games finally surfaces thanks to Brandon Cobb and Super Fighter Team. While Star Odyssey may not be the best RPG on the platform, as a piece of gaming history, it’s something that’s truly great too see and play. Thanks to Cobb’s dedication to seeing the project through (and a solid localization job), a few hundred lucky gamers can now play this long lost gem and see what might have been had this one shipped when it was supposed to. Granted, I’m sure it wouldn’t have set the gaming world on fire back in 1991 or ’92, but the Genesis never really got as many great RPG’s as the SNES back in the day, so what’s here makes for a mostly solid game with a few quirks that keep it from perfection. END_OF_DOCUMENT_TOKEN_TO_BE_REPLACED

So, my copy of Star Odyssey arrived today, interestingly enough on a nice and quiet (but busy) Saturday. I spent a few hours playing it and yup, it’s definitely old-school goodness. Not the best RPG on the Mega Drive/Genesis, but a great deal of care went into the game and it’s one of those “lost” games that was well worth the long wait to finally play. For the heck of it, here are pics of the game one of my Mega Drives consoles and the original Japanese release, Blue Almanac. Enjoy!