Like a perfectly prepared fine aged steak, this Alexander Korda/Irving Asher production of The Spy in Black (or U-Boat 29) comes in hot, sizzling and rare, offering strong performances by its cast along with the first teaming of director Michael Powell and screenwriter Emeric Pressburger, who would go on to work on 24 pictures including a number of absolute classics across a few genres.

Conrad Veidt is excellent as Captain Hardt, a German U-boat commander whose given the task of meeting with a fellow German, a female spy, as they attempt to deal major damage to British Fleet at Scapa Flow, as war raged on in 1917. As the film begins, Hardy and a fellow seaman arrive back in Germany to almost depleted food resources, even at the finely set officer’s restaurant where steamed fish and carrots are the sole offerings. Amusingly enough, the local newspapers trumpet the country’s U-boats and their sinking of English ships that have allegedly been hitting food supplies there, but they seem a bit suspect in their retelling.

“WARNING: Smoking can cause Victoria”

Hardt is ordered to to a bit of infiltration into Scotland, as a plan has neatly been hatched to dispose of a teacher planning to move to a sleepy village near The Old Man of Hoy and with the aid of a disgraced British Navy officer, former Commander Ashington (Sebastian Shaw), who is no fan of the service that did him wrong. Hardt doesn’t want to be a common spy, but orders are orders and surprisingly, his part of the mission gets off to a fine beginning. When he meets his partner in crime, Fräulein Tiel (Valerie Hobson), things go a bit sideways and she locks him in his room every night and as his new commanding officer, keeps him in check even as he makes small advances towards her.

Well, he’s Conrad Veidt, so what else could you expect? Then again, he does meet his match in the lovely Hobson, so there’s that to consider.

I won’t reveal any more of the plot because this is where the film takes off in a few directions, offering up thrills, drama and even a tiny bit of humor. It’s almost like a early to mid-career Hitchcock film minus the MacGuffin, but with a few surprises on the way to its finale. Go in blind and you’ll be pleased as punch, I net. I posted the full film above because I couldn’t find a decent trailer other than this too-short one advertising a DVD version I couldn’t find for sale unless you count what’s on ebay.

As noted, the film is chock full to the brim with notable performances and those twists to the plat are nailed in flawlessly unless you hate the romance angle that kicks in. it’s Conrad’s fault entirely, I say again. Actually, one fun thing here is even the smallest parts in the film are really good ones, as those seemingly minor characters have important things to add (you’ll see). If anything the quality of the film leaves a bit to be desired, as it can be scratchy at times. Yes, it needs a proper restoration if there’s a decent print or prints to be found. 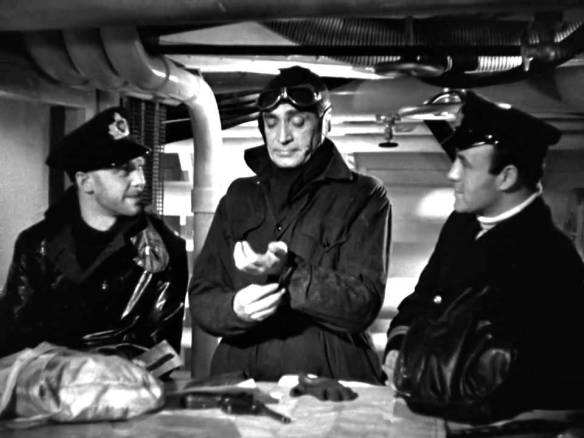 “Und vaht did YOU do during der war?”

Alright, then. I’m going to clam up here, as you have a movie to watch if you’ve never seen it before. Go make some popcorn, grab something fizzy or other and enjoy the ride. I really liked this one a lot and I hope you do as well. Recommended.