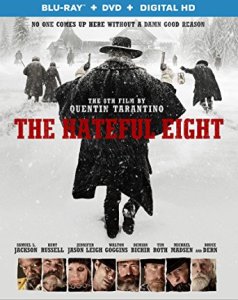 Yep, I’m calling it now. The Hateful Eight is also a Thanksgiving movie you can pop in and clear your house with if you end up with relatives arguing about politics or sports when all they really need to do is show up and shut up when they’re stuffing their faces with whatever tasty treats you’ve prepared. Note to turkey preppers: get that frozen bird defrosted and/or in a brine NOW (as in don’t wait until Wednesday night to fuss with a frozen bird) so you can have it all ready to pop in the oven and done up right. You fresh turkey buyers have an extra day as long as that bird doesn’t go into the freezer.

Anyway, where was I? Oh, right. Yeah, you’ll be thankful for this film because you’re not going to find a more gorgeously shot yet hilariously amoral American film (well, one made by Quentin Tarantino) where you might go in expecting one thing but get exactly what you didn’t think you’d get. Let’s put it this way, if ever a title meant anything, it’s this film’s. Upshot nutshell: Eight not so nice (SO not so nice) people meet and otherwise interact in a cabin they’re trapped in during an epic snowstorm. Not everyone survives the experience. Nutshot upsell: Oh, boy is this film violent as hell. No one is spared from the talented folks at KNB Effects Group as they gore things up with some impressive practical effects. The film is about much more than than, although it kind of takes its sweet time in making its points.

END_OF_DOCUMENT_TOKEN_TO_BE_REPLACED

Both are great trailers, but I give the edge to the Japanese edit for its slightly more spoiler-iffic moments. Um, that is all (for now) as I prefer to wait until the movie is actually out before judging anything else. 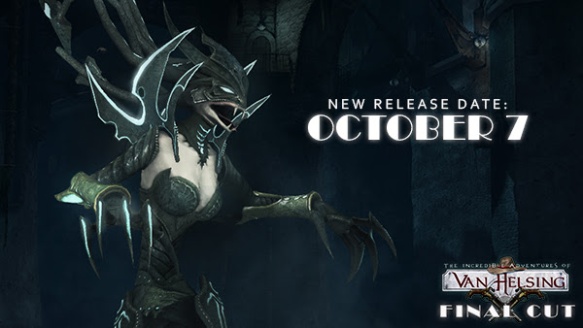 While game delays are always bad news, in this case it’s a case where the developer is trying to make a one-size fits all release work across multiple digital delivery systems in order to get the game in question into the hands of as many people as possible. Go read the very informative blog post on the official site for details. In a nutshell, NeoCore is working hard on getting Steam and GOG.com buyers the same deal where buying the trilogy nets those folks The Incredible Adventures of Van Helsing Final Cut for free even if they buy one of the original games at a later date or buy the trilogy across the two different digital stores.

That’s hard enough to rig, but Final Cut is also going to be doing some additional testing and polishing of the game to insure it’s their best and most polished game to date. Hey, I don’t mind the wait if it means the end result makes me not want to stop playing it.

If you heard some very loud roaring and thunderous stomping noises this week around Tuesday or so, nope, that wasn’t Godzilla outside paying your town a visit. I was probable a bunch of kaiju fans tromping down to their nearest game emporium to pick up Godzilla for the PlayStation 3 or PlayStation 4. While the game comes highly recommended no matter which platform you own, PS4 users get the big fat bonus of playing as any monster in the game in any mode right from the start. Nice. Of course, if all that Sturm und Drang was actually weather related and you were stuck indoors watching lightning bolts fighting each other for scare-space, well aren’t you lucky you don’t like in a copper house?

Anyway, yep. This one needs to be played. One more for the backlog!

Tomonobu Itagaki’s Valhalla Game Studios has been busy getting its Wii U exclusive Devil’s Third ready for prime time and the game finally has a release date. Well, provided you’re in Japan (August 4, 2015) or Europe (August 28, 2015). I’d speculate that Nintendo of America will drop the North American date at E3 next week as well as show more gameplay footage, but we’ll see what’s what then. I have a feeling they’re translating that video above into English as it covers both the single and multiplayer modes as well as shows off how the gae has changed for the better since last year.

In the video Itagaki goes from game creator to extolling the virtues of the upcoming title in his trademark manner. Even if you don’t speak Japanese it’s a compelling video because of the man’s rough voice and distinctive look he’s kept for ages. The very bloody M-rated action game is certainly not for all tastes but it’s good to see the Wii U getting another game that’s not another family-rated party fest. The console needs quirky, funky games like this to show it’s not an “underpowered kid’s toy” as I’ve heard it described at a certain game shop around here.

Granted, it’s tough to say exactly how many fans of this over the top action game actually own a Wii U. On the other hand, I’m betting fans of Bayonetta 2 will be all over this game because that was another Nintendo exclusive that’d drove a few gamers to take the plunge and buy a console because it was the only one the game appeared on.

The more I see of SOMA, the more I want to play it and hear about others playing it. This slow-burner of a sci-fi horror game from Frictional Games looks fantastic and as you can see, has atmosphere to burn in spades. I do love that the game builds up to what’s in this 12+ minute video and will most likely leave viewers interested in the game wanting to grab it just to see how everything falls into place. It seems that players will be in for an excellent blend of adventure game search and use, environmental hazards and one pretty oddball opinionated machine. Iie arigato, Mr. Roboto! Yikes. Anyway, SOMA is out September 22 on PC and PS4.

Yikes. As someone bored by the current state of the PFS genre, this SUPER teasy teaser for Bethesda’s upcoming DOOM reboot made something rattle inside me I haven’t felt in quite some time. Perhaps it was that blast of metal and the howling sound plus the way that creature was shaking as it lumbered forth, shoulder guns blazing away. Yeah, that was something I’d not want to see ambling my way if I were on my last box of shells and there were more waiting around a corner somewhere. Well, time to set my E3 sights on this one I guess. I’m NOT attending the show this year thanks to stuff happening at home (as in walls and ceiling needing to be replaced in a few rooms plus the ongoing roof repairs), but I’ll be keeping an eye on a bunch of titles like this because that’s the only thing that will keep me from going all Space Marine on those folks knocking stuff down just to put it all back together (and hopefully for some sort of good this time- the previous work has blown something terribly).

I can only imagine some wag who plans to blow this off stepping outside one sunny day only to have a chopped and channeled dust-covered death-mobile roll up as a long handled grabber of some kind reaches for their shirt collar. Yeah, that will be a wild ride to the nearest multiplex to be sure. You can avoid this fate by just going to see the movie, you know. It opens May 15 pretty much anywhere you can see current films. Now, I know that some of you adventure seekers wouldn’t at all mind getting yanked into a crazy-looking ride for a bouncy-bouncy trip to the cinema. But the thing is, when these guys show up to get you… you end up riding OUTSIDE on that long pole. That could get problematic if you happen to reside in an area with a lot of potholes. Ouch.

Sure, it’s all fun and games, but YOU try and get some decent sleep when there are a bunch of over-sized rubber suits banging away on the buildings on YOUR block. BOOM! ROAR! CRASH! “Hey, keep it down!” just doesn’t work on a pair or more of bent on destruction giant beasts like these, you know. Fortunately, all that glorious wreckage is only on the PS3 and PS4 and not for real, as I can see real world property values sinking but also growing back after a short while. You know people would probably move in JUST for the monster battles because humans are dumb and love to watch any sort of fight (provided they don’t get hurt).

Oh, and as for that “Hollywood Godzilla” pre-order bonus, I laughed out loud because for some reason I thought of this film clip when that image and text popped up onscreen. Yeah, I’m a nut. I know, I know. Hey, I didn’t make that old and too loud film. But I did pay good money to see it when it came out (and still want my five bucks back, Mr. Spielberg!).

What’s been interesting about these Terminator Genisys trailers is how the internet whiners has reacted to the reboot without realizing that the new film is playing them like violins. The time-bending going on here and all the plot twists see as spoilers might not even be the big things the movie is bringing to the table. Me, I like the idea of taking the first two films and remixing them so Sarah Connor knows what’s coming and prepares for it before finding out things aren’t as she planned for.

I’m really curious to find out what type of Terminator John has turned out to be as well as seeing if the process can be reversed (remember, we’re dealing with time travel and its many possible ripples) by the time those end credits roll. That and hell, it’ll be fun hearing whatever goofball quips Arnold comes up with as the film progresses. It looks as if Emilia Clarke has got some of his better quotes from the first two films down pat. Eh, we’ll see (as usual). I don’t expect him to survive this flick either, but I have the feeling that even if he does… he’ll be BACK. Well, at least for one more go-around.