As someone who fondly remembers Target Earth/Assault Suit Leynos on the Sega Genesis and Mega Drive, reading online about two years back that the game was being remade was quite a surprise. Dracue Software (Armored Hunter Gunhound EX) has brought the game back for the PS4 in fine form indeed, although Assault Suit Leynos isn’t without a few flaws. For fans of the classic or those gamers who want a taste of old-school gaming as an education in patience and learning how to play over more guided game experiences, this storied shooter will keep you busy from the beginning and coming back for more.

The game’s Arcade Mode expands the story of the original game, adding subtitled Japanese voice-overs and “cinematic” camera cuts to approaching danger to the mix. Even on the lowest difficulty setting, the game provides a hefty challenge. That Assault Suit is a heavy beast with an increasingly growing arsenal of weapons and while not the most nimble mech out there, it gets the job done. As in the original game, a regenerating life meter is your main buffer from an early demise, but it’s not any sort of invincibility guarantee. Enemies come at you pulling no punches in many forms from armor suited troops to gigantic spacecraft firing death from multiple weapons. The game’s levels vary in scale, but you’ll generally be attempting a few tasks from straight up blasting, escort missions, and yes, big boss battles. While unlimited continues make it possible to complete the game in a relatively short time, the true fans of this one KNOW this isn’t a game to play through ONCE and never touch again.

Controls will take a bit of getting used to if you rush in expecting a simple point & shoot setup. Success in this game is based on learning how to best use those unlocked weapons while not getting blown to scrap metal in the process. In many instances, you’ll be taking small amounts of damage to avoid taking huge amounts of damage because you’re in a spot where it’s just not possible to not get hit. If you recall the first game well, you know the final two stages were pretty darn brutal. Well, they’re worse here, but in a way veterans will welcome while the total newbies will become testy metal toast as they eat through continues. That $19.99 cost turns out to be a bargain once you see the replay value and bragging rights up for grabs. The unlockable content and a few oddball Trophies mean completion freaks will have this one on their play lists until and past it being mastered.

From a presentation perspective, Dracue has done a solid job here for the most part. Fully and partially animated elements mixed with layers of parallax scrolling, transparencies, great environmental effects and some fine lighting add punch to each level. Some visual tricks work better than others, as seen where depth of field in necessary and lower-resolution assets are used. Or in a few cases where an object’s perspective seems off when compared to other elements onscreen. The biggest offender is the awful text font that should have been in a nice, sharp and easy to read resolution. Instead, it’s a bit hard to read and fuzzy, making it a pain when a mission’s directive changes and you were too busy staying alive to notice what needed to be done. The original game (and the Classic mode bonus here) stopped the action for the text crawls, but Dracue’s decision to keep Arcade mode moving ends up being a good thing. 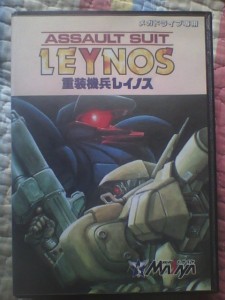 Speaking of Arcade Mode, it presents the original version of the game with those great old sound effects and still effective soundtrack. Without the voiced dialog and camera pull-backs it’s shorter, but still VERY replayable. Before reviewing this, I dug out my old copy of Leynos and a Mega Drive just to prepare myself for Dracue’s new assault. Let’s just say that while I completed the game, it wasn’t pretty and man, do I stink at some old games I was okay at well over 20 years back. The new version of Arcade mode is equally, if not more difficult thanks to the visual effects and busier overall look to things. Those painful last two stages were a whole new world of hurt that took longer than expected to beat. But they got done and I actually moved on to review a game that ended up harder (more on that later this week).

Overall, Rising Star Games did fans of the classic Sega Genesis game a huge solid in publishing Assault Suit Leynos in North America. While it’s not perfect, it’s a ton of fun to see it bought into the 21st century still looking a bit nostalgic and packing a payload of challenge. If this does well enough for Dracue to do more games in the Leynos lineage, they’ll be welcomed here with open arms and sore thumbs.