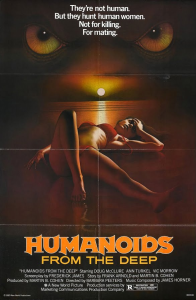 It’s pretty much a 60’s “B” flick dipped in the not for the kiddies gore and nudity of early 80’s slasher flicks. But on that level Humanoids of the Deep works. You’re pretty much getting The Horror of Party Beach and Creature From the Black Lagoon with a bit of actual horror, but the film is more notorious for its added in post-production scenes of icky, horny sea creatures molesting a few young actresses after whipping their bathing suits off. That caused a bit of a stir back when I saw this in 1980 with a few friends and I also recall a handful of people screaming and doing an exit dash at the film’s somewhat ALIEN-inspired final scene.

Back then I didn’t like the film all that much because of its extremes and that it felt like two different films crunched together at the expense of the better one. But over time it’s become something of a mash-up of intentional and unintentional comedy, eyeball-rolling “shock” scenes and yes, well-known cast members who didn’t realize they’d be starring in a rather mean-spirited exploitation moneymaker that would garner a loyal fan base. For me it’s more of a great guilty pleasure when I look at it now. Albeit with a big blood red caution buoy in the water if you’re squeamish or easily annoyed by gore and gratuitous nudity in a “roughie” manner.

The plot concerns the usual “science gone awry!” story which has been done too many times before in too many films to mention. In the fishing village of Noyo, California, scientists from a company called Canco have been feeding Noyo’s salmon an experimental growth hormone with the intent to produce larger fish. Yes, Canco wants to also open a cannery and corner the fish market with its jumbo salmon (which would go well with jumbo shrimp, I’d gather). Of course, some of those not quite ready for the can super salmon get loose and get eaten by other fish and before your popcorn has cooled off, there’s some nasty sea creatures stalking the citizens of formerly low-key Noyo. The film gets off to a bang with the discovery of one of the monsters that leads to a few deaths (some by a hysterically funny accidental explosion). But the body count will certainly rise before those end credits roll.

It takes the combined efforts of villagers Jim Hill (Doug McClure), Hank Slattery (Vic Morrow) and a helpful assist from Canco scientist Dr. Susan Drake (Ann Turkel) to figure out what’s going on. But stopping the sex-crazed fish-men is another story altogether. Or it sure seems as if it is when you see the film stock change a few times. The film was directed by Barbara Peeters and you can see the makings of a pretty interesting “B” picture. Executive Producer Roger Corman had the creature rape scenes shot or re-shot (either by Jimmy Murakami or the second unit director) to spice things up a tad and they’re all tough to watch if you go in expecting a campy little low-budget film. Then again, seeing the mostly well-done gore effects on the guys was a kick because I’d forgotten about the impact and aftermath of some of those slayings.

Par for the Horror 101 course, Noyo’s also a hotbed of Hollywood teen outdoor sexploits that all get spoiled by those fishy-smelling sea creeps. As noted, most of the murders most foul are gory for the males and disgusting for the more abused females. But there’s one very funny kill that involves the editing in of a ventriloquist dummy’s head that I recall making the entire theater crack up. It’s one of the few actually “fun” bits in a film that works in as much cruder exploitation as possible during its running time. All the talk about environmental issues and Canco’s scheming get lost in the murders and rapes that take place to the point that viewers that pay close attention might see the night and day difference in how the story veers and lurches to it’s closure.

Not that the creatures don’t get their comeuppance, mind you. Once the townspeople realized that the population has been decreasing geometrically over the course of a few days, they take matters into their own hands just as every monster bum-rushes Noyo’s annual salmon carnival/beach party. It’s supposed to be a cathartic release for the viewer but the massacre comes off as a combination of spectacularly funny and supremely gory as creatures are killed by any means necessary. Naturally, a bunch more humans buy the fish farm as well and things seem to end on a high note for humanity. However, the final scene in the film is the big shocker because it’s so over the top that you’ll be laughing and cringing simultaneously. Or just cringing it you really hate cheesy gore effects.

As “Bad/Good” as this one is, I can only imagine what would have happened had any hungry bears gotten into that salmon. Mutated bear-things gone wild! Actually… wait a second there, kids. That’s been done already in John Frankenheimer’s awful 1979 horror flick Prophecy. Forget I said anything about bears, then. For the record, Humanoids From the Deep did get a 1996 remake that I’ve yet to see. But I hear it’s not as tasteless as the original was. That might make it less interesting in a weird way but I’ll let you know when I cross that particular stretch of bad road.

This post is part of The Beach Party Blogathon presented by Speakeasy and Silver Screenings. Pop on over and check out the other writers who’ve contributed to the cause. Summer’s almost here and you’ll need something to do when the weather outside keeps you from your own beach party escapades. Then again, As I don’t go to the beach these days, a light breeze and too much son will put me indoors and in front of the tube for a long day of flick catching.

10 thoughts on “(Not So) Random Film of the Week: Humanoids From The Deep”