This latest trailer for EDFIR is pretty goofball stuff, but definitely enjoy it for what it is. Of course, you can check out a more “serious” trailer and a nice set of screenshots on the PlayStation Store page (and pre-order the Standard or Ultimate digital edition of game if you like). Everything is shaping up to be the most epic entry in the long-running series to date and yes, that worldwide release insures EDF fans everywhere can play together or alone and not feel left out of the action.

Oh, for the record, I’m finally finishing up my Earth Defense Force 5 review (yeah, it took a while thanks to the ridiculous amount of content in the game, but that’s show biz, folks!) and should have it up over the weekend. Pop back in and see if it’s a total blast of a game more folks need to jump on (spoiler: it most certainly is).

D3 Publisher in Japan has been running a series of informative live play videos of the upcoming Earth Defense Force Iron Rain on its YouTube channel, and while all the dialog is in Japanese, once the gameplay kicks in after some lengthy chatter, all four episodes are quite fun to watch. While there seem to be no plans to do a western version of these videos, I’d be first in line to volunteer for a series here provided I get to wear an ant mask or some sort of other disguise. That or, I’d at least want to do an interview with some of the dev team at YUKE’s behind the game and/or some of the folks at Sandlot just to give readers an idea of what goes into making the EDF games so insanely fun when all is said and done.

Given that this is the first game in the series to get a simultaneous worldwide release and it’s a PS4 exclusive, there’s a lot (ant) riding on it being a smash out of the gate or at least becoming a game with long (spider) legs as well as an “evergreen” game that sells well on a regular basis. The best thing about every game in the series is fans of all skill levels truly get their money’s worth if they want to see everything thanks to the tremendous amount of weapons and gear for each character. “Bang for the buck” really holds true for this series and that’s a great thing to see as a hallmark for this somewhat niche franchise that really deserves a larger player base.

Well, I knew way back when it was announced that Earth Defense Force: Iron Rain (set for a worldwide April 11, 2019 release as a PS4 exclusive) was going to be a big departure from the Sandlot-developed games, but that new Ant riding class? Nice… and kind of really weird at the same time. Anyway, veteran developer YUKE’S is on the case with some gorgeous Unreal 4-powered visuals, character customization for a player’s chosen class and a few other features geared to a wider audience that may want all the series hard-core bug, beast and ‘bot battles with a more serious story. In other words, it looks as if the campy dialog is possibly getting put to the side for this new game. Even if this isn’t completely the case, this interview over on the official PlayStation blog with series producer Nobuyuki Okajima makes for an interesting read.

Oddly enough, while the Sandlot-developed games are well known known for their intense action and incessantly, intentionally inane dialog (delivered via some oddball voice acting), the games are all fiercely difficult as the missions throw hundreds of enemies at you and ask you to take care of the swarms as you see fit. There’s also a deadly serious undertone to the games as the Earth always seems to be at the end of its rope and your character(s) are the sole means of stopping the aliens from exterminating what’s left of humanity. Seriously, if it weren’t for the dopey commentary in the last few EDF games, you’d have a really dire story line where millions are annihilated around the world every few years and you and what’s left of the EDF are the world’s last best hope every single time.

END_OF_DOCUMENT_TOKEN_TO_BE_REPLACED

Well, this one’s a total surprise to wake up to. Sure, I knew we were getting a sixth* Earth Defense Force game from D3Publisher and developer Sandlot sometime this year (and yep, those busy guys really need to update their main website!), but there’s a also an all-new digital-only EDF game spinoff starring Wing Diver (aka Pale Wing here in the US) on the way to PlayStation Network (it’s a vertical arcade shooter!) as well as another EDF game in the works coming in 2018 from veteran Japanese developer Yuke’s that looks to be a more dramatic take on a series known for its campy voice acting but tough as nails gameplay.

(*not counting the portable versions)

END_OF_DOCUMENT_TOKEN_TO_BE_REPLACED

Another “enlistment” video from D3Pulisher in Japan for Sandlot’s upcoming Earth Defense Forces 2 Portable V2 on the Vita has more than sold me on this game. As a longtime EDF fan, I’ve known that EDF 2 was and is the best game in the series in terms of content and the developer really pushing the PS2 past its limits back when that version was initially released. The enemy variety was and still is the best in the series, the night maps with those spiders hopping about with glowing eyes were terrifying and those damned rolling pill bugs drove me up a wall figuring out how to get rid of them before they steamrolled poor Storm 1. All that and the game has one of the funniest levels in the series with a MASSIVE beast showing up as a surprise boss after its two rather large offspring get taken down while on a rampage.

This updated version takes content from the original version and the PSP update (which was great despite the sluggish frame rate), adds what’s looking like improved multiplayer and much cleaner visuals. It looks as if the controls will be the same and Pale Wing’s goofy running animation is intact. Well, at least she can fly and has the best weapons in the game. I do hope her experience growth is the same as in the other versions of EDF 2 and not the insanely low numbers she gets in EDF 4. My one major gripe about that game was how unfair it handled character leveling. Anyway, I’m hoping D3Publisher of America or some other smart publisher is looking to localize this and get it out at some point. I’ll import if I must, but I’d really LOVE to see a push to get this one out and done in North America just so Vita owners can have another must-buy title… 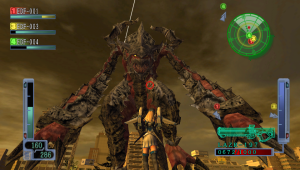 Of course, that’s a limited time deal, ladies and gents. January’s #1 selling Vita game can now be yours (and a few friends of yours,of course) for ten bucks cheaper until April 2, 2013. Given that Earth Defense Force 2017 Portable packs the possibility of well over 50 hours of play (and then some) into that PSN download, it’s still a bargain at its non-sale price. Of course, I’m COMPLETELY biased in saying you NEED to buy this game, what with me being a fan of hard working Japanese developer Sandlot and their games. Then again, I’m gathering you’d want someone who knows what they’re talking about to recommend something like this to you, right?

As I noted last week, D3 is bringing out the Sandlot-developed action game sooner than later and at a very good price point at that. While it’s a premium price point, that $39.95 is actually an incredbly GREAT deal for this one, as you’re getting online play for up to four, all new weapons, dozens of hours of play (and even more replay value if you become a hardcore EDF fanatic) and yes, Pale Wing to play around with for the first time in the US. Anyway, go buy a Vita if you don’t own one yet – it’s been a good few months for Sony’s handheld and there’s a lot more to come. Hmmm. I suppose I should ask D3 about a digital release for those of you who prefer downloading everything, but let me finish doing my happy dance around the room that we’re actually getting this one localized first… 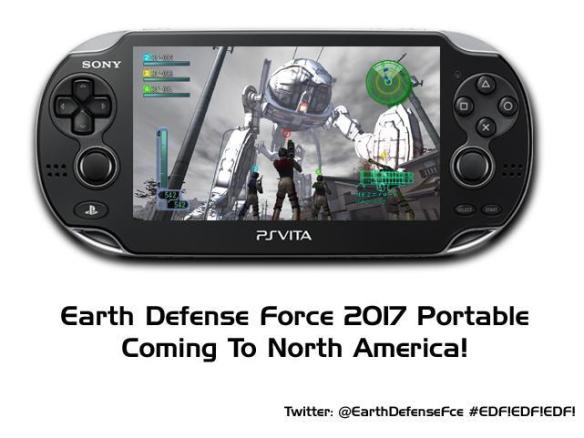 Well, that’s what I call day-making news (at least in my world). D3Publisher of America has announced via Twitter (and to us press folk here) that Earth Defence Force 3 Portable will be headed stateside in Winter 2013. I’m gathering that that vague launch window means sometime between January and March, not November/December of next year. I’d heard rumblings about an English script a few months back from somewhere I can’t say, but I’ve been keeping that info secret because I absolutely despise rumors and getting people’s hopes up about something so cool. Anyway, even though I’ve imported the Japanese version, I’ll absolutely be diving back into the game again when it lands in stores sometime next year. EDF! EDF! EDF!

With EDF 3 Portable landing in Japanese and Asian territories (retail and PSN) this week for the Vita, I’m hoping that D3Publisher of America is paying attention to the awesome promo videos being produced for that game and the currently in development EDF 4, set for a 2013 release. This is exactly the time to get in early on getting Sandlot’s name into gamer ears as a team that can bring it when it comes to over the top run & gun action and much more tremendous replay value than found in other titles. Keep up the great work, Sandlot – as for D3’s US arm, I have just one thing to say (three times): EDF! EDF! EDF!

And you thought YOU had bug troubles? Vita owners in Japan (and some lucky folks like me who are importing but STILL want this localized for our territories) are getting what I consider to be an instant system seller in the form of a SUPER enhanced version in one of the most action-packed “retro” sci-fi shooters ever. Of course, the man on the street stuff above makes for a fun watch that would be cool if the game was promoted here in the US in a similar manner (should it get the green light for a localization)…