Because sometimes you really really need to relax, games such as Feather ($12.59, $9.99 on PC) exist and should thrive because they do what they do well enough to recommend to those with more open minds. Melbourne-based Samurai Punk‘s super-chill experience is as much of an art project as it is a highly playable stylized bird flight simulation and it works on a few levels some won’t immediately grasp. Its open world setting couple with the simple to pick up controls allow free exploration of the map which reveals a few nifty secrets for those willing to take the time to dive in and discover.

This is a game where the intentional low-poly look blends seamlessly with its lovely soundtrack that does a great job of transporting you and your brain into a comfortable place for as long as you need that respite. As there are no big goals other than enjoying the ride and locating all nine music tracks (accessible via circular gateways placed in select locations), it’s a case where if you want to end the game, it doesn’t mind when you quit because any “progression” you’ve made isn’t saved. Yes, that seems strange in this era of auto-saves or games recalling your last position before a huge event. Feather itself is the event, and it’s a low-stress one at that. Jump in at any time and fly until you’ve had your fill.

Oh, the places you’ll go: Just explore everything, as you’ll fly into some odd spots worth seeking out.

There’s also a sort of online multiplayer mode that I’ve yet to experience (or at least it’s so passive I haven’t realized I’ve played with others), but according to the game description, the game features “Passive online multiplayer, allowing anonymous players to seamlessly drop in and out of your world”. Granted, I was too busy flying around the gorgeous, massive landscape enjoying the music and sound design from Mitchell Pasmans that I likely didn’t realize I might have joined a temporary flock at some point. That’s not a complaint, mind you – the game is, as noted quite good at freeing your mind as you flap along. You do have a chirp used for communication, but I didn’t notice anything special happening when I tapped that button. Er, I think I didn’t, that is.

After a few sessions playing, I kind of wish Samurai Punk had programmed or assisted with work on Friend&Foe’s Vane, an otherwise well-made game that also features bird flight as a huge draw. Similarly stylized visuals aside, that game has some flight mechanics that are a bit too suspect in regards to targeting and landing precisely. Then again, my sole major issue with Feather is you can’t land your bird and walk/hop along the ground at all, something that would add a bit more variety to the experience. I also didn’t note any sort of Achievement system here, but that’s actually something I welcomed because playing solely for those digital rewards often makes too many games a one-time play deal for certain gamers. 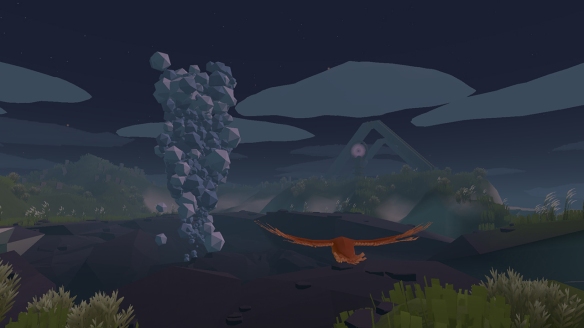 Play for ten minutes, play for an hour, it’s going to be a comfort zone no matter how you fly.

As to overall performance, I actually didn’t mind the mid-90’s era frame rate at all, as it reminded me of that time before frame counting and all the wacky over-analysis that comes from debates over what constitutes a “decent” gameplay experience “needs” to be. That said, if Samurai Punk can it the game running a bit smoother on Switch (a locked down 30fps is fine), that’s fine and dandy. However, I kind of dig the nostalgia factor on display and sure, I guess I can go try the Steam version to see how it stacks up at some point.

Granted, what’s here will be too “arty” for some and/or too pricey for others including those in the “Games NEED to be games!” crowd who don’t understand the total flexibility of the medium extends beyond conflict, destruction and maxing out a system’s visual power. Sometimes you just have to get that what goes into a game doesn’t always reflect what it should cost and sure, paying a premium for something so “simple” is going to send some into the usual paroxysms those folks feel they have to fall back on when it comes to indies and what they “feel” is a fair price point. Eh, it doesn’t matter to me when the overall experience is worth all that zen-like mood this one puts me into.