As I figured, D3Publisher wasn’t going to wait TOO long to get this fantastic enhanced version of the former Xbox 360 exclusive localized and out for Vita owners starving for content, so here you go – EDF 2017 Portable is coming out sometime this winter, not NEXT winter as has been reported on some web sites. That initial confusion came about in the first press release that noted a “Winter 2013” release, which in turn had some editors thinking this meant late next year (as in around the holidays). As you can see on the left, it looks as if this will indeed get a retail as well as digital release (a really good thing for those who want both options). 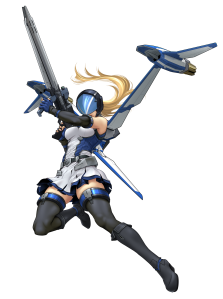 Anyway, a small set of screens to ogle is below – that’s Pale Wing on the cover and to the right, making her return to the series in fine form after her debut in Chikyuu Boueigun 2.  I’m playing the import now and having a complete blast with it (a review is incoming), but I’ll absolutely be replaying this in English when it hits retail and PSN … er, sometime between when winter starts and spring begins. OK, D3 will absolutely be a bit more concrete on the EXACT date shortly, folks – but isn’t it great to know you don’t have to wait over a YEAR to play one of the best (and absolutely most feature-packed) Vita games to date? The new four-player online co-op and versus modes should add some additional oomph for those who want to play with friends and I’d expect this will do quite well once Vita owners see how much chaos Sony’s handheld can handle. Sandlot has rebalanced the weapons a bit so multiplayer sessions aren’t overbalanced in favor of four people blowing everything up too easily, but for solo players who want one of the most hardcore game experiences they’ll play in terms of challenge, Inferno Mode will test your skills to the utmost. Trust me, it’s HARD as hell when death is coming from all sides!

That’s it for now on the EDF front lines – I need to get back to farming up some armor and trying to get more weapons, as Inferno mode is kicking me around the room. Those seven new levels and some of the enemies (gold ants and two-toned spiders in particular) are pretty mean bugs that take a bit of effort to squash in you’re not prepared enough.

1 thought on “Earth Defense 3 Portable Update: THIS Winter, Not Next For Bug Blasting “B” Movie Fans”