Where it all begins for one Redmond Barry.

Barry Lyndon is a story which does not depend upon surprise. What is important is not what is going to happen, but how it will happen. 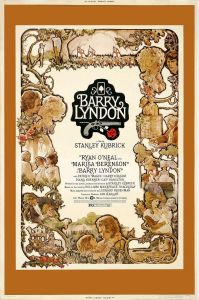 My first introduction to Kubrick’s Barry Lyndon was via the most likely means most 11-year olds with little to no interest in certain three-hour plus films made by somewhat visionary directors had at the time: MAD Magazine. I do recall that particular issue was confiscated from the classmate who owned it later in the day by a somewhat strict English (Literature) teacher who didn’t appreciate his not paying attention during her class. Fortunately, the magazine was returned the following day with a note that student had to take to his parents about his reading habits during class and oddly (or not so oddly) enough, a public library copy of The Luck of Barry Lyndon for him to read, write a book report on and return to the teacher. It turned out the teacher was a big fan of Kubrick’s film but had never read the MAD version, so she took it home, read it and liked the parody. Thus the somewhat unusual  temporary gift and form of “punishment”.

You gotta love good teachers, friends. Go and hug one today (er, with consent, of course).

I’ve had the feeling for some time that I may have wished for such a tremendous fate back then, as it took quite a few years more for me to actually read the book Kubrick adapted and altered somewhat using groundbreaking lighting techniques and some of the most gorgeous and true to life costume recreations ever put on film. It’s also a film where you can practically hear its director chuckling as he reworked the book into his own style that in my opinion, fits in well with Thackeray’s original writing. Droll, deadpan humor is laced throughout the dramatic scenes, all of which are masterfully composed shots that may have you pausing the film to admire a landscape or painterly composition (of which there are many). Excellent performances from the cast all around also help, as does realizing that Redmond Barry (Ryan O’Neal) isn’t supposed to “act” here in the sense of a person throwing himself into a part and chewing up the scenery. He’s perfectly cast as a man in a particular point in history where both good to terrible things happen and he reacts as he sees fit (which isn’t always accordingly).

“Oh, so THAT’S what the word “Highwayman” means”: Poor Redmond becomes a lot poorer as he’s set upon by painfully polite father and son thieves while traveling.

The first part of the film, By What Means Redmond Barry Acquired the Style and Title of Barry Lyndon introduces Redmond and his initial problems: growing up fatherless (as a result of a duel), falling madly in love with his beautiful, flirtatious cousin Nora Brady (Gay Hamilton), and eventually, his being forced to join the British army after he thinks he’s killed an important officer in a duel. Amusingly enough, Redmond Barry turns out to be more shrewd that smart as it turns out he’s been royally duped on a few fronts that don’t serve him well. His voluntary military serves takes him to both sides of the conflict after he secretly flees British service for one country and ends up pressed into the fight on the Prussian side thanks to a wee bit too much lying. That well-tailored costume he’s disguised in helps him not a whit as his wagging tongue does him in.

After saving the life of a Prussian Army captain during a decisive battle, Barry’s status is elevated quite a bit and he’s asked to become a spy, focusing on the antics of card-playing libertine Chevalier de Balibar (Patrick Magee). Redmond sees through Balibar’s disguise and reveals himself to be a fellow Irishman, which leads to the pair teaming up to cheat at cards and rake in a small fortune from easily duped nobles. Both Barry and the Chevalier escape after things get tense, but they rejoin forces and continue their ruse until Redmond meets, falls for and weds the wealthy Countess of Lyndon (Marisa Berenson). Their meeting and quick courtship might be the most romantic thing Kubrick had ever shot, but the priceless “To make a long story short…” line delivered by the narrator never fails to crack me up each time. In some other movie this would indeed be The End. However, Thackeray and Kubrick have more of a story to tell and Redmond Barry still has not learned all his lessons in life.

Magnetic attraction, but polar opposites: Barry’s wooing of the Countess of Lyndon is both the best and worst thing to happen to him. You’ll see. Love the hat and the dress and waitaminnit?  Who the hell would be a jerk to Lady Lyndon? Oh, right.

The second part of the film, Containing an Account of the Misfortunes and Disasters Which Befell Barry Lyndon is pretty much what I’d call A Rake’s Progress in that it’s familiar to that classic series of paintings and etchings. Also, stepping on a real rake with enough force progresses it upwards towards the face and Redmond Barry (now Barry Lyndon) stomps that old rusty rake as hard as he can. Over a period of years things spiral out of his control thanks to fate’s wheels turning and some really poor life choices on his part. He may have a beautiful house… and a beautiful wife, but Redmond forgets to ask himself the all-important question “Well, how did I get here?”, which ends up causing him more misfortune than you can shake a stick at, plus tax.

His general disrespect for her, roving eyes and hands get him in trouble with the Countess, who despite bearing him a son, can’t take Redmond’s continual lusting after other women. His young adopted son Charles Bullingdon (a melancholy little boy, much attached to his mother, notes the narration), outright despises him for years to the point where he needs to be constantly punished for his disrespect. This leads to Barry eventually losing his societal connections after brutally beating the now teenage Lord Bullingdon (Leon Vitali) at a birthday party for the Countess. Side note: Vitali, a promising young actor quit that part of the business  (mostly) to work for Kubrick as a personal assistant for over 20 years. There was indeed an excellent documentary made back in 2017 that’s well worth seeing).

Oedipus wrecks: Lord Bullingon (Leon Vitali) sure turns out to be Barry’s second worst nightmare as the film progresses.

Meanwhile, back at the ranch, Bullingdon leaves the estate after being beaten by Redmond (oh, he’ll be back), Barry’s expenses are draining the Countess into debt, and even worse, Barry’s son with the Countess dies after falling from a horse (as foretold earlier on). Both Lyndons (real and false) descend into grief with Redmond choosing alcohol and Lady Lyndon choosing religion and later, a failed suicide attempt. News of this gets Bullingdon to return home, whereupon he challenges a drunken Redmond to a duel. Kubrick added this sequence to the film as a bookend of sorts and it’s powerful and tense even though you kind of know how it will play out. Redmond survives, but loses a bit more of himself  (an unkind, but necessary cut, as it were) and any chance of getting his hands of any more of Lady Lyndon’s loot than necessary other than a tiny yearly annuity. Such is life, as the film rolls up a final sting.

The kicker for me is the film’s final line from its narrator: It was in the reign of George III that the aforesaid personages lived and quarreled; good or bad, handsome or ugly, rich or poor, they are all equal now., which made me laugh out loud the first time I saw the film because it seems to render the experience down to a more modern  “Oh well, $#!+ happens!” hot take. If I recall correctly, that first time was either on a rental VHS tape or it may have been a cable TV viewing because I can vaguely recall seeing it on both formats within a short period of time. It also still makes me laugh because it seems at least one pair of famous writer/directors seem to operate on this principle for almost all of their films where a slight mortal shrug works as a perfect coda to what has come before no matter how mundane to wild things get.

The painterly (and boozy) approach to grief, or: presenting the Dutch Masters on Skid Row, thanks to Kubrick’s artful eye and John Alcott’s lovely cinematography.

The film was nominated for 7 and eventually ended up winning 4 Academy Awards (Best Production Design, Best Costume Design, Best Cinematography, Best Score) and yes, Kubrick was shut out completely despite doing some of his best work. It’s odd that some of the more egg-headed critiques of the film back them looked down on some of Kubrick’s choices when it was more important to see the film as a whole entity and not pieces of a particularly sumptuous pie.

Despite the length and seemingly slow pace (a lot happens in that 187 minutes), Redmond Barry’s somewhat tumultuous (and not based on a true story, mind you) life story has gotten more appreciation over the years as a true cinematic classic that needs a fresh look for some who may have avoided it or just haven’t seen it in a while. For a film with no surprises, it’s one that you can watch more than once just to marvel in its sheer beauty despite nearly whatever else is taking place onscreen.

You’ve got more reading to do, dear reader. Get ready.

Say, did you know this post is part of The Costume Drama Blogathon hosted by Debbie (Hi, Debbie!) over at Moon in Gemini? You didn’t? Well you do now, right? Anyway, it’s a bit early so it won’t be a bit late, as I’m going to be away for the weekend and wanted to not rely on WordPress’ auto-posting system, the planet melting before the weekend or other kooky stuff like that. Go take a spin through the sites noted on the blog from September 6-8 and see what’s shakin’, I say.

14 thoughts on “(Not-So) Random Film of the Week: Barry Lyndon”