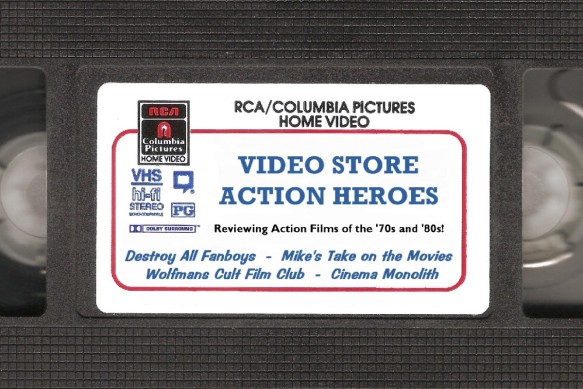 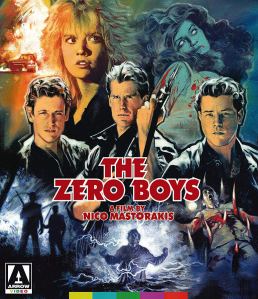 The story kicks off with a gunfight that’s actually a paintball match/too well staged action flick recreation by a group of weekend warriors who seem to meet up regularly to battle it out for bragging rights and a bit of cash. Those Zero Boys are the big winners of the match and the leader of the other team has gone and wagered his girlfriend Jaime (Kelli Maroney) as a prize for the weekend to Steve (Daniel Hirsch) without her knowledge. Much to his dismay, she agrees to go with Steve and his buddies for a trip to the woods that will turn into quite a dangerous diversion. Hey, she’s bored, her bf is a jerkhole and Steve seems nice enough, sooo… it’s off to the races. 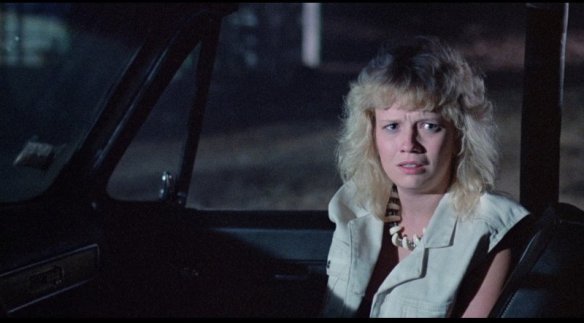 Jaime (Kelli Maroney) keeps seeing things, but no one believes her until THEY start seeing things. By then, their weekend is pretty much screwed.

It turns out Jaime is quite an asset to the team after the group first stumbles across a woman running away from something in the woods followed by a seemingly deserted cabin the gang somehow thinks its a good idea to move in for the weekend. Sure enough, it’s discovered that the “empty” house is a house of horrors complete with a body in a trunk, a head in the freezer, a torture chamber in the shed next door and yep, the house’s inhabitants thinking they’ve got a batch of fresh meat shacking up in their space waiting to be teen slashered to death. Okay, everyone is past their teen years, but you know what I mean. Soon enough, those survival skills the Boys have will be put to use as they try to survive the night. Atmosphere is everything in this film and the use of fog machines, well-placed lights and other tricks gives the film an overall excellent look. Well, save for some dry ice “mist” used late in the film that looks a wee bit phony (as does the “shocking” effect beforehand). 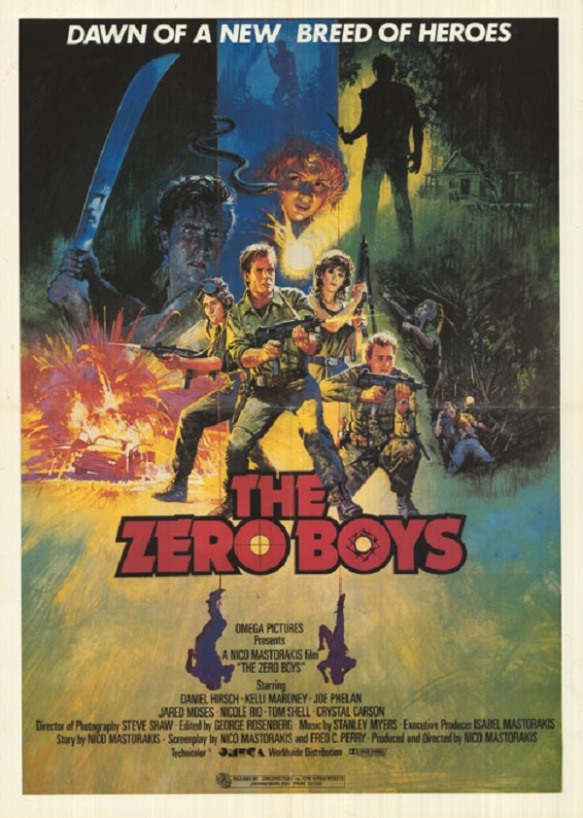 One of the cooler things is how Mastorakis laid out what could be some early groundwork for “found footage” films while it paying homage to everything from The Most Dangerous Game, Deliverance, Southern Comfort and a few other flicks. The film plays with a few cliché moments and references lines and situations from other genre films nicely and the cast of not quite known actors does a pretty decent job with their parts. The most famous faces here to many will likely be Maroney (Night of the Comet, Chopping Mall), and Joe Estevez (aka Joe Phelan), but there are a few other notable names in the crew (Zimmer, Frank Darabont) before they became much more famous for their contributions to bigger deal Hollywood fare. 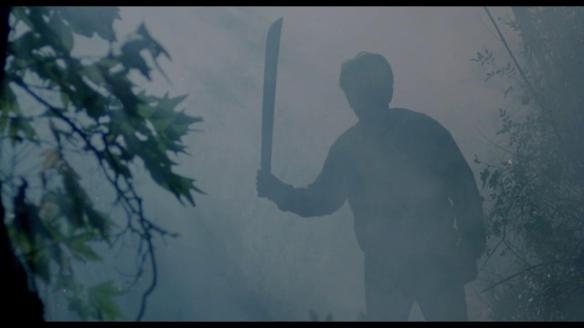 Um… if it’s a really foggy night and you see this guy hitchhiking… do not stop the car. That’s NOT a thumb he’s holding up, duh!

As noted above, the film does have some wacky logic gaps including at least four whoppers where people do really dumb things that either endanger themselves or others, some of which leads to unintended eyeball-rolling humor. These bits stand out here because the film’s overall level of polish is pretty good for something shot in under three weeks (or 17 nights and one day, according to the director). The other gripe I had was with the villains because you only clearly see one (Estevez) and he looks a bit too much like someone’s drunken dad with his wild eyed stare and too-comfy looking sweater.  He almost looks like a a psychotic Mr. Rogers, but you didn’t hear me say that, right? 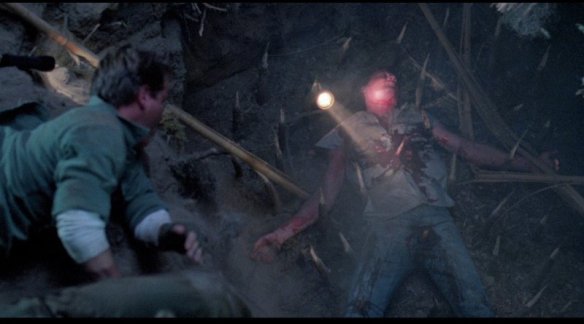 Kids, this is why you NEVER leave knives or forks in the dish drainer pointy side up. Ouch. Ouch. Ouch.

Anyway, the film is a cool and recommended slice of 80’s nostalgia, but I won’t mention the rather innnnnteresting ending, which I liked because it’s a fun little surprise you might not expect after a tidy hour and twenty eight minutes. I will note that I watched this with a friend who threw up his hands in the air and yelled “OH, COME ON!” when that ending rolled up, which made me laugh because I then had to listen to his play-by-play commentary for a few minutes afterwards on what he liked and disliked about the film. Hey, at least he liked all the special features on the Blu-Ray, so I’ll call that a win for them holding his attention from start to finish because he’s that guy who never watches them and I had to practically twist his arm (well, offer him the rest of the pizza he’d ordered) to stay seated. Well, a little (food-themed non-)violence between friends is sometimes a necessary evil when the ends justify the means, right?

9 thoughts on “Not So Random Film of The Weekend: The Zero Boys”