Oh joy! Or should I say Zo-Joi! Shadowgate is now available on the iPad. $4.99 gets you this revamped classic that was a PC exclusive now on your tap and slide tablet of choice (well,if your tap and slide tablet of choice happens to be an iPad 3 or better). While not a “horror” game per se, exploring the gloomy deathtrap that is Castle Shadowgate can be a bit frightening at times. Hey, when you walk into a room filled with treasure and see that rather pissed off dragon eyeballing you, you’ll either get smart and get lost or get greedy and roasted up but good. Unless you have a certain item that can withstand a blast of fire or two. Yes, that was a free game tip.

The beautiful artwork in this remake alone is worth the five bucks you’ll spend. Fortunately, Zojoi has made the new version of their 1987 classic every bit as devious and challenging as the original with even more to do and some super-challenging difficulty options for you adventure game masters out there. As if this wasn’t a good enough deal, Zojoi has also gone and made iOS versions of its four original MacVenture Series games. For $1.99 each you can play the classic Shadowgate, The Uninvited, Deju Vu and Deja Vu II.

And yes indeed, The Uninvited IS a horror game (and a good one at that): 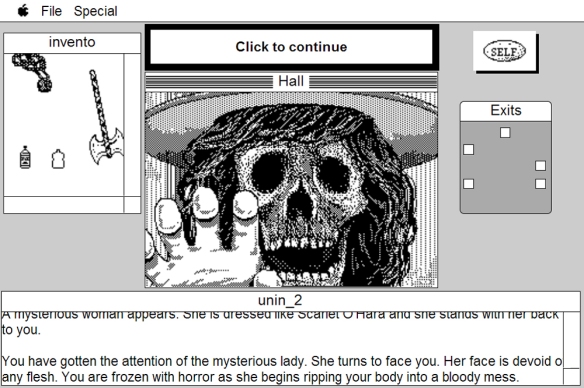 I shall leave you with the lovely lady in red above (that’s blood, by the way… YOUR blood!)- go get some yourself cheap classics today and have yourself an adventure (or four).

Vblank Entertainment’s head honcho Brian Provinciano is a truly mad genius in the best possible way. His single-minded obsession with his hilarious “retro” game Retro City Rampage has led to it being released on PC, Mac, Linux, PlayStation 4, PlayStation 3, PS Vita, Xbox 360, Wii, Wii U, and Nintendo 3DS over a few short years. Now, he’s gone and reprogrammed the instant classic and has gotten the game onto a 3.5″ floppy disk for 486 computers along with a Windows 3.1 prototype as a free bonus. If you still have an old PC lying around with a floppy drive, you can (and should indeed) snap up one of the limited edition boxed versions (there were only 1000 total made) and prepare for a nostalgic trip down memory lane with a game that probably wouldn’t have existed back then and if it did, it would be hailed as a fine slice of comic genius or something like that. 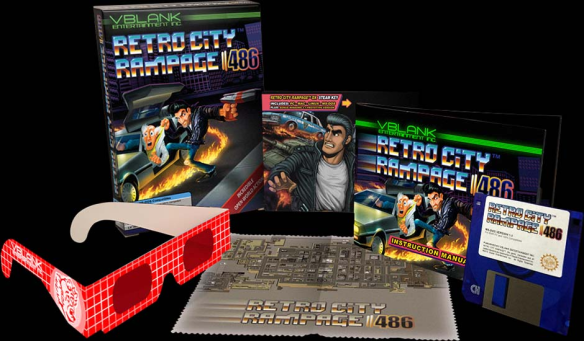 If you happen to own the more modern PC version of the game already and bought it from the developer directly, guess what? You should probably check your Steam account for a nice freebie surprise. Everyone else, run or click like the wind HERE and hope for the best. Like the PS4 and Vita retail editions, this will probably sell out ridiculously fast. Yes, the game will also run on DOSBOX if you have a newer PC. I almost forgot to mention this, so now you don’t need to hit up eBay looking for some aged system to run RCR 486 on.

As far as the repro game scene goes, the folks over at PCE Works are doing quite possibly the best job out there in bringing gamers who collect these high quality fan-created reissues the best in custom limited editions. If you happen to be lucky enough to sitting on about 240 US dollars (or €219) and want that wonderful-looking wooden crate chock full of goodness for your own game library, boogie on over to the link you’re clicking now and check the availability of this limited edition as well as other PC-Engine gems for sale there.

Not how I wanted to start or even end a day, but this sad news popped into my inbox a few hours back and will take time to fully sink in. Nope, I never met Mr. Iwata and neither did millions of people who enjoyed what he worked on and/or his informatively entertaining Nintendo Direct videos and Iwata Asks series of interviews with game creators. But I did play many games he was part of, from Balloon Fight, Alchahest, EarthBound, Animal Crossing and many more.

The man may be gone, but his many works and those who will continue to play them and pass them down to a new generation will last as long as the planet still spins. Hopefully we’ll see some sort of physical presence of his collected works from Nintendo at some point. While a huge convenience, this digital-mostly age has been pretty poor at making sure a pure legacy exists of many games outside the hands of the most dedicated collectors.

Anyway, you’ll be missed by many, sir.

Um, Happy Belated Birthday, Pac-Man! As I’ve been busy with some stuff here, I missed the big day for this classic arcade character. But my breakfast a few days back reminded me to check and yup, he’s a year older. Anyway, YES the photo is upside down because I just noticed that it looks as if that eggy-veggie thing I made has got an eye and eyebrow when it’s flipped that way. Okay, so I never said I was perfect. Well, at least ol’ Pac won’t come after me because I forgot to get him a card or bake a cake. He’s cool about that (or so I hear).

So, I’m soaking in La-Mulana EX on the Vita (or, it’s kicking my butt six ways ’til Sunday and today’s Sunday!) and I finally realized one game that was a huge influence on it is still out there and free for anyone to try. The Maze of Galious is an excellent fan-made remake of Konami’s 1987 MSX classic Knightmare II: The Maze of Galious.

Anyway, if you’re up to the challenge of a game made to test your skill while showing off some cool features implemented by the team who remade it, go grab this now and take it for a spin. You’ll get two playable characters, a HUGE map to explore in any order you wish and ten bosses to face off against. It’s “pay attention!” gaming at its finest, as while you can go anywhere you like, death awaits at the slightest mistake on your part. Have you got what it takes to get Popolon and Aphrodite to the end of their journey? I can very safely say that this game sure doesn’t think so because it tries its hardest to stop you from succeeding. 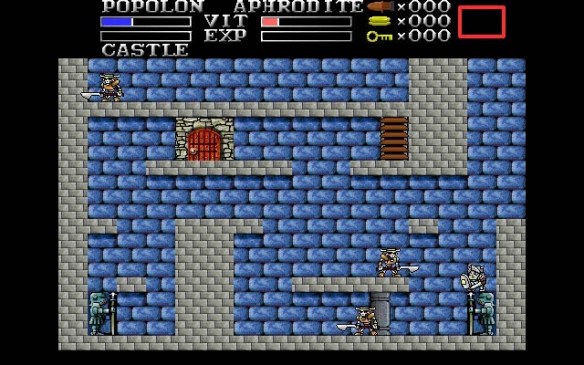 It’s same old story, brand new engine time for Jeff Vogel and his small team over at Spiderweb Software, but this is a really good thing for fans of the developer’s work. This time, their classic RPG Avernum II is getting a complete makeover as Avernum II: Crystal Souls, set for release soon on PC, Mac and assorted devices. Spiderweb’s complex and engaging role-playing games have always been unique because of their sticking to what Vogel likes and not what the game marketplace “demands”. This means no flashy 3D engines or “uncanny valley” visuals, dense stories filled with loads of text and some intriguing characters and a simple to learn yet tough to master combat system.

Fully exploring every nook and cranny in a Spiderweb game takes a good deal of time, that’s for sure. But playing through each of their games reveals what happens when people who love what they do get to stick to their guns and make what they want to make with little to no compromise. I can’t wait to take this one for a spin and I’m betting like the company’s recent games, it’ll run on almost any machine that uses Windows XP and up without taxing the hardware. That’s excellent for dinosaur PC users like me who don’t play online or waste too much time being “social” babbling about how Spiderweb needs to finally make a polygon-heavy title that requires the latest 3D card (or two) just to get running. There’s still no school like the old school because you don’t need to blow a hole in your wallet to simply enjoy a damn good game, folks…

Hey, Zojoi Games! I fixed the typo in your email ad (you’re welcome and sorry about the spacing, as there’s only so much I can do in MS Paint in under three minutes) and thankfully, you fixed it before it went up on Steam. There’s nothing worse that dealing with nit-picky fans raking you over the coals for a misplaced “a” or other letter. Anyway, overexcited typist/layout person aside, this deal on the new Shadowgate game and two well-aged adventure classics cannot be missed, folks.

You’re getting a lot of awesome point and click-ness for that $20 and if you want your brain to jump up and thank you for making it work hard figuring out puzzles and trap solutions, well, here you go. A gift to you from you (because I don’t know you and wouldn’t give you something you may not want). Go get these NOW!

Yaaah! When did this slip out? Oh, September 30? Well, I wasn’t paying attention, but this one’s on my list of too many games to buy and play. *Sigh*… well, given that I have the Genesis version here and have made it about halfway through, I know what to expect already. That said, the HD visual upgrade makes this one the one I’ll probably default to once it gets purchased. So many games… so little time, grrrr!

Nice. Arrowhead Game Studios has done classic and current gamers a solid by making their Gauntlet reboot a more than worthy nod to the original arcade classic. I sure hope to heck this sells REALLY well and someone has had the foresight to get the developer some console dev kits, as this game is PERFECT for some solo or offline/online couch or not co-op play sessions. That and some of us old fogies like playing the game with some sort of joystick and not a keyboard/mouse setup. Also, it would be excellent to have the ability to take this one on the road as a Vita or (if it’s not too much trouble to do a new version down the road) 3DS game. Eh, we’ll see what sales figures and company heads say, I suppose. The game was made for the masses back in the day and there’s NO reason it shouldn’t be available on anything else that can handle it, I say…