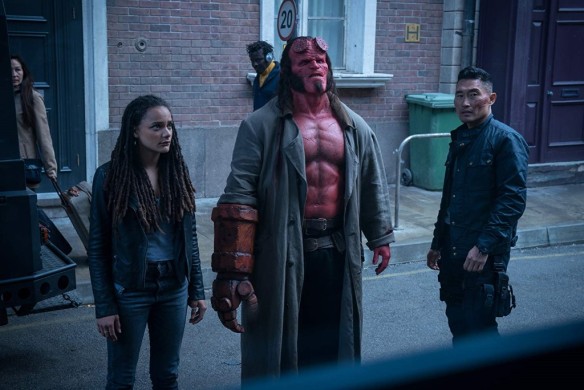 London’s burning with boredom, now: Well, not yet on the burning part, but plot-wise, that’s all she rote. This is a busy flick that can be hell to watch.

Somewhere around the 10th level of Hell, it’s good.

So, I finally saw Hellboy a few days ago and waited to write this review to see if I still remembered what happened a few days later as it’s quite a busy flick (there’s a LOT going on, let me tell you).  I did remember (mostly), but I also realized for the second time after a second viewing that it would have been better as a short mini-series on cable spread over a few days that the two-hour film that’s here. I mean, go big or go home, right? This film just goes big all the time, but all that effort manages to feel flat and canned.

The main issue here is despite the copious amounts of swearing, R-rated mostly CGI gore and a few decent performances, the film crams so much in its 120 minutes that it feels like three films worth of material. Between the flashbacks, references to the comic (of which there are plenty) and the fact that it’s quite loud most of the time and has a pretty annoying selection of “headbanging” hard rock tunes (if headbanging means bashing one’s own skull in with a Sisyphus-sized boulder), the end result manages to feel too much like a film made by committee. This one’s a push-button film designed to be some sort of forced “cult classic” and both looks and feels like it. At least some of the practical costume monsters look as if they’re perfect for prime time.

Basically, it’s film taken mostly from Mike Mignola’s rather good and often quirky stories, embellished with a few tweaks and “edgy” parts, sprinkled with Del Toro spice way too lightly (maybe two grains) and spit-roasted until crispy and overcooked. It’s also an origin story that spans a few centuries, packing in Arthurian legends, a vengeful plague-spreading witch called Nimue (Milla Jovovich, who’s lovely when she’s not CG) cut into pieces in that time period who slowly gets those pieces back over the course of the film. Trust me, two hours isn’t long enough for all this, but the film tends to go for excess over sensible exposition, so it’s kind of a mess.

There’s a trip into WWII where we see where Hellboy was found as a child, a few too many disposable could have been interesting characters, and even more disposable CGI monsters and humans. You also get a couple of witches, Baba Yaga and her chicken-legged house, some odd people and odder monsters trying to kill Hellboy a few times, Nimue returning, Britain getting a nasty taste of the end of the world or something, a resolution and ending that seems to promise a sequel (whew!). At least the score by Benjamin Wallfisch is pretty decent stuff that propels the film forward, but the butt-rock chosen for the action sequences feels and sounds as if they left the temp track in and forgot to replace it. I guess it’s appropriate for the time period set at the end of the film, but Mötley Crüe’s “Kickstart My Heart” at the end had my eyes rolling in my head. I always thought Hellboy was an MC5 or Iggy and the Stooges guy.

There was popcorn all over: Nimue (Milla Jovovich) gets me to run into my TV set (ow). Hey, she said “Come to me…” and I was thinking she was in the room at the time.

There’s also the odd conflict Hellboy has with his adopted father, the somewhat acerbic Professor Broom (Ian McShane) when he discovers his past and how he was found. For a while he’s just pissed off at his faux dad and he starts questioning the reason why he’s killing monsters when he’s a monster himself. Oh, the angst, right? Except Hellboy’s griping and whining comes mostly after a scene where almost all of his fellow agents save his dad have been killed off screen and although he does mention it to his dad, he’s given the old “well, the rest of the world will die if so and so comes back” comment as a response. Sigh. Oh, and this time there’s no big. evil machine hanging over the planet that spells doom like in other hero flicks. Nope, it’s death from below this time as Hell comes to earth in the last part if the film. Double sigh.

At least lead David Harbour isn’t trying to do Ron Perlman here. He plays a younger somewhat angrier version here, cuts a fine figure (well, fine muscle suit) and has a few decent snarkily delivered lines. But a few of the main cast (Sasha Lane, Daniel Dae Kim) also get a few one-liners in like the film is a roulette wheel of well-timed jabs. The Mignola influence is here, but the film uses it in a weird way, retelling parts of different stories and placing them together in a Frankenstein’s Monster manner. Hellboy was in Mexico fighting a wrestler with a cruel secret in a short tale in the comics? Check. Hellboy’s origin story spans hundreds of years, has Nazis to kill and a nifty character you’ll only see twice in the film (well, he’s a ghost the second time you see him). Check. As noted, the film is practically a greatest hits version of a Hellboy comic, but written down to be less ornately weird and more, er, “hardcore”. 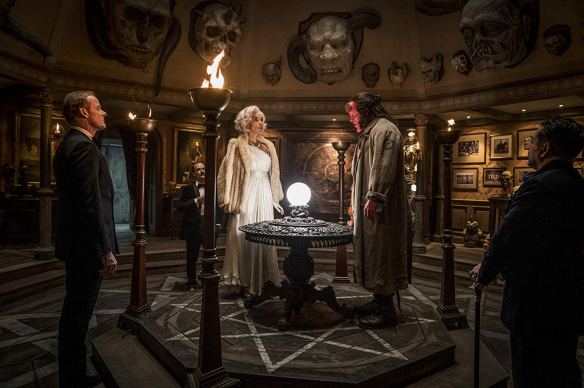 How come the resident psychic-looking type has no nose for future trouble? Nice set, though.

For someone coming into this cold who eats these types of films up with relish, I’m sure it’s all fine and dandy and yes, enjoyable to some extent with the blood, gore and icky content. Restraint is not a strong point here, so by the time you get to the scene where Baba Yaga is serving up a fresh bowl of child soup to Hellboy (which he refuses, so there is some restraint after all), you’re probably going to be so numb to all the CGI by then that you can take a brick wall to the face and not flinch. That Baba Yaga is a thing to watch as a mix of practical and CGI, though. She’s pretty much a version of the ugly crone who’s fast moving, and looks and acts like she’s left over from an Evil Dead-like horror flick. There’s also bit of that sort of Raimi-like humor here, and it’s pretty okay.

If the brutal but kind of funny giant killing sequence early in the film doesn’t do it, The apocalyptic London scenes late in the film will test your tolerance. Hellboy attaining a certain item literally causes all hell to break loose and the city and many residents suffer for it. Bodies are smashed, faces yanked off, people get ripped in half. It’s a gory mess, sure. But the overuse of CGI makes it look more like a game from a few years ago and despite all that destruction, there’s no impact other than the shock of seeing a few fake people take one for the team. Worse, the film decides to skip to a few months later after the event and not even acknowledge the carnage that took place as it closes with another fight scene and the discovery of a popular character we don’t see unveiled save for a hand and arm.

How I felt after watching this twice.

I’d forgotten how fast movies go to home video these days, so I checked and Hellboy was released in early April in the US and popped up as a disc n July before finally landing on HBO last week. Yeesh. I do feel sorry for the cast and crew here, but I also realize that some people out there like this film or will like it and others like it for a few reasons. More power to them, yes, but a little Del Toro goes a longer way, I say. It’s really not as terrible as you’d think, it’s just… there. But man, does it just sit there like a cat aimlessly cleaning itself, only to spin into a weird shape and look back at you like it got caught doing something like knocking all your stuff of a shelf. That was its plan for later while you were asleep, by the way.