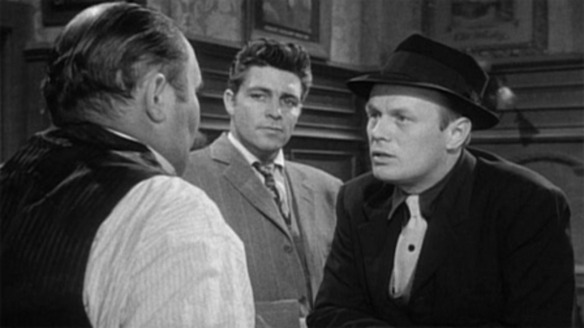 “You got any wheelchairs, pal? I wanna take a friend for a little trip.”

No, it has nothing to do with a misspelling of decades old candy bars still being made today or the old TV series which got a sequel show in 2016 that’s still a thing, but this one does make a fine holiday-themed movie even if it’s not really one save for the the final tale. Even though it was released in 1952, O. Henry’s Full House looks like it was made ten or so years earlier, but that’s a good thing. There’s a distinctly quaint feeling here in this anthology of five classic stories by five different directors and the film is a pretty one to cook up a bit of popcorn for, even if in some areas, its almost too wholesome. Well, save for the Howard Hawks-lensed chapter, which is just pure hilarity in that it seems no one got the humor it its tale and his chapter was excised until it was restored in TV prints years later (and remade as a few films of note).

So, five short films, five directors and about as wholesome as possible save for one chapter that goes for the jugular (in a very funny manner)? I’m in. Although I was in already, as this one’s been a favorite for decades. Toss in John Steinbeck (!) as a narrator (which is kind of like having Stephen King or even better, Neil Gaiman host an Edgar Allan Poe anthology film, I guess), and you get a pretty interesting film that’s an easy view unless you’re overly critical about a few performances.

“The Cop and the Anthem”, Set in the early 1900’s and directed by Henry Koster, this opening mostly comic segment tells the story of a somewhat wily old vagrant named Soapy (Charles Laughton) in a nice suit who decides a few months in jail is better than sleeping on the cold streets. Unfortunately for him, he can’t get arrested to save his life. Getting tossed from an expensive restaurant after a hearty meal, falling hard while trying to kick a cop in the butt, tossing a stone through a window that has people chasing the wrong man, and a chance meeting with a lady of the evening in broad daylight (Marilyn Monroe, in a cameo that’s way too brief) can’t land him in the pokey.

As it’s an O. Henry story, the old man gets a big epiphany and his wish in the end with a bigger dose of irony. Somewhere, in the audience I bet there was a young guy named Rod taking notes for a big future in television.

“The Clarion Call” is up next, and in this Henry Hathaway-directed segment, a detective with financial problems (Dale Robertson) has to deal with a stone cold murderer (Richard Widmark) who got him out of a gambling debt years earlier. The criminal taunts him endlessly when they meet, holding the debt over him because he knows the detective can never pay in full. Robertson is somewhat (and likely intentionally) bland here – the show is all Widmark’s. He’s more or less channeling his performance in Kiss of Death here, but dialed way back like he’s Mean Machine Angel on a .5 setting. Almost every time he’s on screen, there’s that fantastic laugh and a sense something bad is going to happen, but other than some tussling with Robertson, Widmark’s only other meanness comes from him eating way too many oyster crackers in his chowder (a scene that always cracks me up). The ending is nifty, although some may guess or figure it out even though the film disguises it a bit before spring it on you.

“The Last Leaf” follows next. Directed by Jean Negulesco, his story is about a pair of sisters (Anne Baxter, Jean Craig) living downstairs from an often drunken old painter (Gregory Ratoff) who can’t sell his rather abstract paintings except to the sympathetic dealer who refuses to pay more and buys them at a mere $3 a pop. When Craig’s character falls ill from pneumonia (the film also hints at depression due to becoming pregnant from a guy who dumps her for another woman at the start of this chapter), the bedridden sister links her fate to some ivy she can see from her window that the wintry winds are stripping away. Baxter and Craig look so alike here save for their hairstyles that they could be real sisters, although Craig looks too pretty and flawless even as an ailing would-be tragic character.

That imperfect painter stumbles and stutters about here, annoying Baxer’s character as her sister fades away. But he manages to save the day in a unique manner, but at a cost. This one’s pretty melodramatic at points, but both ladies keep your eyes open, and Ratoff’s humor stabilizes things from getting too maudlin until the finale, which is properly so.

“The Ransom of Red Chief” is up to bat next, and it swings for the fences right from the start for a few home runs. Directed by Howard Hawks, this segment is the funniest in the film, but let’s play a quick game so you can guess at least one reason why it was initially cut from the finished film for years. Let’s see now, here’s the plot: two city-bred criminals (Fred Allen, Oscar Levant) get more then they bargain for when they drive into a sleepy, local yokel country town and kidnap a child who turns out to be quite the handful.

Hmmm. Ma and Pa Kettle was quite popular at the time, so poking fun at that type of character was fine back then (that and these “hick” characters here actually get the best of the visitors and come off as smarter despite the accents and seeming slow). The segment pops in a few (ugh) “Indian” references that yes, would be controversial today, but not back in 1952 when westerns on film and TV formats were numerous and full of Native stereotypes. I’m betting it wasn’t the kidnapping stuff either because, hoo-boy, that kid (Lee Aaker) really gets the best of his “captors” from the the moment they take the sack off his head. No, my money is on Aaker’s being cast so well as an unrepentant holy terror, pulling a rather large knife on his captors, luring a live (and well-trained) bear to terrorize them, and being an all-round opposite to what adults thought kids were supposed to be. That, and does anyone recall The Window (1949) which features a kid in peril who’s kidnapped by his upstairs neighbors after he’s a witness to murder?

No Olsens here, unless a character has that as a last name…

It works for me because Allen and Levant play their roles so well as do everyone else – the pair sound polite and educated, but are dumb as rocks when it comes to dealing with the kid and the territory. The people in that town welcome the kidnapping because it gives them a break from the kid for a spell, and sure, a chance to shake a lot of money out of a tree with a pair of nuts in it. It’s a story that’s hilarious and yes, predictable. But it just gets funnier as it goes along. Next to Widmark’s performance, this one’s my all-around favorite segment. Still, I’m always surprised they didn’t get that fancy car as well. But then again, I’d bet that town is dead quiet (well, outside the kid being a pain) until those city folk show up in their constantly steam-spewing, loud as heck ride. 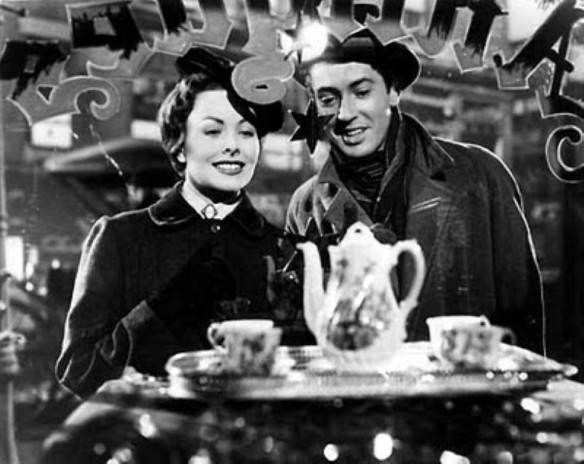 They could have waited until movie theaters were giving this stuff out for the price of a movie ticket, but, nooooo….

“The Gift of the Magi” brings it all home with its sentimental holiday tale of a poor couple who decides to get each other a gift, but they unknowingly make sacrifices that render their gifts useless to each other. It’s a solid, heartwarming job from director Henry King, and both Farley Granger and Jeanne Crain do lovely work as the couple.  If this segment has any flaws, it’s familiarity, as this O. Henry short story practically telegraphs everything for the viewer and you’ll guess what happens at the end early on. But it’s sweet and comfortable viewing, so it’s all okay. I also recall seeing a few variants on this story over the years, so it’s a case of people adapting a famous story and adding elements while keeping what works.

This is a fine watch if you haven’t seen it, holiday season or otherwise. It happened to pop up on TCM here and I’d not seen it is a while, so my attention was grabbed and it did a fine job of transporting me to another century for a spell. Which is good, because we could all use a bit of this sort of thing from time to time. Recommended.