“You’re gonna stay in this picture and LIKE it, Mister!” 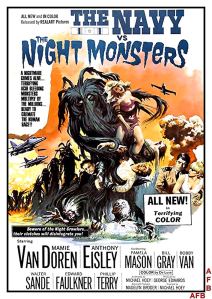 From looking at this list in comparison with these much longer ones, it seems to me that in the 1960’s, science fiction flicks exclusively made in the US were in a bit of a rut. You can also see from those longer lists that horror films have fared far better and you can probably name quite a few memorable fright films from the era off the top of your head from Carnival of Souls, Night of the Living Dead, A few Herschel Gordon Lewis flicks, Rosemary’s Baby and many (many) more. Let’s just say that truncated list in the last sentence was about 20 or so films before common sense made me edit it down.

The reason I’m focusing on US-made films is simple. As other countries were just more prolific and innovative in their sci-fi films and during this time, the US seemed not to know what to do well despite kicking off and ending the decade with some pretty solid films (1960’s The Time Machine and 1968’s 2001: A Space Odyssey). Which brings us to one of the less stellar efforts of the decade, 1966’s The Navy vs The Night Monsters. The film looks and feels as if it was made a decade earlier and interestingly enough, the best thing about it is the actress playing the requisite eye candy, Mamie Van Doren. “Best” meaning she plays her role as straight as can be does it without chewing the scenery or mugging it up for zero laughs like some of the guys here do. Stripped of its silly jokes, it might have been a decent “B” flick, but hey – some things just won’t die a natural death.

END_OF_DOCUMENT_TOKEN_TO_BE_REPLACED

“It might be Mark’s store… but its MY town…”

Marketed as a a Django film in some territories, Ferdinando Baldi’s Texas, Adios definitely isn’t one. It has more in common with earlier western formula and pretty much sticks to its guns (ha!) throughout as a solid film that’s not as stylized as other spaghetti westerns, yet it’s unmistakably one that tries to be as American as possible. It’s a bit more violent than the older oaters, but it’s perfectly acceptable by today’s standards. Franco Nero makes for a decent single-minded hero when all is said and done, there’s not a love interest in sight, and the film gets a bit ruthless when it needs to make some points. Just don’t count the times no one reloads (unless the plot calls for it, guns seem to run on rechargeable batteries here).

Nero plays Burt Sullivan, a sheriff in a small town who travels to Mexico to bring a man named Cisco Delgado (José Suárez) back to justice in one piece. He’s got a strict moral code in effect, but he’ll absolutely kill anyone else who tries shooting him, of course. Cisco happens to be somewhat of a big deal feared criminal there, what with being a well-dressed meanie with a big villa, a ton of henchmen, and quite the cruel streak. Sullivan wants him alive because he killed his father many years ago also he can see him hang or be jailed in America. Naturally, Cisco very steadfastly has no travel plans to leave Mexico. Must be the weather and assorted torture he’s fond of exposing those he disagrees with that keeps him happy.

Sullivan’s brother, Jim (Alberto dell’Acqua [under the unwieldy moniker “Cole Kitosch”, which sounds like a designer of expensive clothing you’d never wear]) tags along and we find out that Jim’s got something not even he knows is a secret. I’m keeping that secret a secret because it’s a nifty twist that kicks the plot above its level (and adds some poignancy to the affair), but really isn’t much of a surprise if you’ve seen other films that have similar themes

END_OF_DOCUMENT_TOKEN_TO_BE_REPLACED

I keep meaning to review Don Sharp’s 1966 flick Rasputin, The Mad Monk one of these days for the site or perhaps a blogathon or something. But I also keep forgetting to track down a personal copy so I can watch it whenever I need a good laugh. Waiting for TCM to show it again sometimes pays off in the long run because there’s a decent enough chance they’ll also show something suitably loopy.

This is one of those films that defies proper categorization because it’s kind of all over the map in terms of tone. It’s a biopic, a horror film of sorts, a gold mine of unintentional comic relief and of course, a showpiece for the great Christopher Lee. Yeah, I’d normally have done this up already (and most likely for The Great Villain Blogathon 2015). But it’s been busy as hell here what with the roof being repaired (again!), more work going to happen in the apartment (STRESS!) and some other stuff that’s keeping my productivity lower than usual.

That said, I’ll give ol’ Raspy a two word review for those of you curious types who need to know: SEE IT. You’ll very likely laugh yourself extremely silly and get your cringe on as well because the film can be a bit creepy on a few fronts.

I was already in a lousy mood yesterday, but waking up to the news that Ralph Baer died pretty much kept me inside for the bulk of the day ruminating. I was eight years old when the Magnavox Odyssey launched, but my family didn’t buy one because we had assorted hobbies that kept us occupied. In fact, although I’d been to the arcade down at Coney Island back when I was six or seven, I was more impressed with the pinball machines I played (or tried to play). However, finding out a cousin had an Odyssey in his closet AND a color TV in his living room got me curious enough to see what was in that big box (a lot of stuff!) and what happened when it was all wired up to that big TV set… END_OF_DOCUMENT_TOKEN_TO_BE_REPLACED

“Nothing like a little disaster for sorting things out.”

Some people hate Michelangelo Antonioni’s groundbreaking 1966 film Blow-Up (or Blowup depending on how you prefer it spelled, I go with the poster myself) with a passion reserved for cruel dictators and people who drive vans full of puppies and baby rabbits into lakes. Me, I’ll admit to disliking and being frustrated with the film when I saw it as a not quite ready to see something so heady teenager thinking it was going to be something entirely different. However, as years have passed and I’ve seen it a few more times, I’ve come to truly appreciate the film for the things it nails while realizing most people who despise the film tend to over-analyze it to the point of making themselves confused as to exactly what the movie is about.

For all its swingin’ London scenery, excellent use of that great Herbie Hancock score, skinny exotic models posing for a seriously unlikable main character and seemingly “boring” stretches where seemingly, nothing important happens for some viewers looking for a proper narrative before something important DOES happen (that’s picked upon as important to those plot followers, naturally). The funny thing is, any attempts as locking in that golden “Aha!” moment are interrupted by a few distractions that intentionally take focus away from things unless you’ve clued into what’s actually going on here. With all that, Blow-Up is actually a surprisingly minimalist and easy to understand film, albeit an experience that demands your complete attention. Well, once you cut through the arty fat and get to the hidden in plain sight meat on the bone dangling in front of you, it’s a more fulfilling viewing experience. On the other hand, it’s also a film that while open to a few interpretations, still revolves around a central theme some continue to overlook. END_OF_DOCUMENT_TOKEN_TO_BE_REPLACED

(thanks, Night of the Trailers!)

Yikes. Depending on your tastes, Norman’s Panama’s 1966 Sex comedy Not With My Wife, You Don’t! is going to be a very funny film or one you can’t stand. That’s because this sort of humor is SO dated that some will consider the film extremely sexist to a fault (it is) while others who can slip into the mood of the era comfortably will find it a rollicking good time with a nice all-star cast, some lovely Technicolor photography and a fun Saul Bass title sequence that’s one of his quirkiest (see below).

Me, I kind of straddled the fence before falling into the latter yard. While it has its moments and yes, some wonderful shots of Air Force jets in action that make it a must see, the film hasn’t aged well at all as it flops and flails about in too many attempts to be a slapstick comedy while tossing around its questionable content with the hope it always lands on its feet…

END_OF_DOCUMENT_TOKEN_TO_BE_REPLACED

Oops. Go grab some Dramamine – I’ll wait. OK, you’re back? Good. I’d almost forgotten to upload these awful Batmobile videos from the Mezco Toyz event back on June 25th,so here you go. Thankfully, they’re all short and easily digested (*burp!*). I’m laughing like a maniac in one of those clips because of the absurdity of how small the entrance to the Ripley’s Believe it or Not space is and the fact that so many people were cramming in that it was hard for anyone to get pictures or video.

I think I had another two or three movies I deleted that were nothing but hands with cameras filming more hand with cameras as that Batman theme looped endlessly, but I deleted those because I was laughing even MORE hysterically in those films. I’d have them subtitled in some comic book font if I had decided to run them, though. Some sort of Joker laugh repeating “HA HA HAAAAA!” over and over…