“It might be Mark’s store… but its MY town…”

Marketed as a a Django film in some territories, Ferdinando Baldi’s Texas, Adios definitely isn’t one. It has more in common with earlier western formula and pretty much sticks to its guns (ha!) throughout as a solid film that’s not as stylized as other spaghetti westerns, yet it’s unmistakably one that tries to be as American as possible. It’s a bit more violent than the older oaters, but it’s perfectly acceptable by today’s standards. Franco Nero makes for a decent single-minded hero when all is said and done, there’s not a love interest in sight, and the film gets a bit ruthless when it needs to make some points. Just don’t count the times no one reloads (unless the plot calls for it, guns seem to run on rechargeable batteries here).

Nero plays Burt Sullivan, a sheriff in a small town who travels to Mexico to bring a man named Cisco Delgado (José Suárez) back to justice in one piece. He’s got a strict moral code in effect, but he’ll absolutely kill anyone else who tries shooting him, of course. Cisco happens to be somewhat of a big deal feared criminal there, what with being a well-dressed meanie with a big villa, a ton of henchmen, and quite the cruel streak. Sullivan wants him alive because he killed his father many years ago also he can see him hang or be jailed in America. Naturally, Cisco very steadfastly has no travel plans to leave Mexico. Must be the weather and assorted torture he’s fond of exposing those he disagrees with that keeps him happy.

Sullivan’s brother, Jim (Alberto dell’Acqua [under the unwieldy moniker “Cole Kitosch”, which sounds like a designer of expensive clothing you’d never wear]) tags along and we find out that Jim’s got something not even he knows is a secret. I’m keeping that secret a secret because it’s a nifty twist that kicks the plot above its level (and adds some poignancy to the affair), but really isn’t much of a surprise if you’ve seen other films that have similar themes

Burt and Jim meet up with a few roadblocks in their attempts to get Cisco snatched, one of them being Jim getting kidnapped, the other being Burt getting sent packing as Cisco has him waylaid by his men. Things aren’t going great for Burt as his stubborn nature has him initially reject help from some men who want Cisco taken down, but he wises up later, joining the cause (but on his own terms). Taking down most of Cisco’s men is the easy part, getting to Cisco and Jim? Well, that’s not so simple.

The film takes on a few tones as it goes on, but I rather liked the twists and turns found here because they fit the story being told. Comedic moments are very light here, thankfully. It’s all Nero’s show, but dell’Acqua’s athletic stunts and striking good looks make him a pretty decent co-star. The villains are great as well, but José Suárez will have you shaking fist at some of his depravity. Or smiling, if that’s your thing.

As with most Arrow Video releases, this one’s got pretty solid features and what’s here is pretty interesting and informative, adding to the experience: 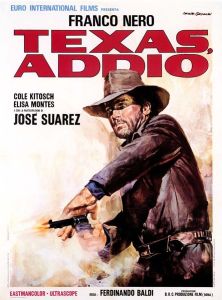 In terms of the transfer, it’s very well done save for a few seconds in an indoor area where it’s likely the best surviving shot was located and the picture does the best it can do with what’s there. It’s a pretty good film overall, but I can see huge fans of the genre saying they’ve seen better or more satisfying flicks at the end of the day.  As for me, I rather liked it and yep, I’m glad to finally see it’s not just a Django sequel, but standalone film that’s worth a look for what it does and does well.

That said, I really do need to see Django again, as it’s been a while. I thing I have a Blu-ray here in my stack of Arrow stuff, so we’ll get to that once we brave the deadly tower of doom, as I call it. Oh wait, I do, as it’s a double feature. Well, well… guess what I’m reviewing next if nothing else gets in the way?