Hey, my mood lightened! Ha. Anyway, I was trying to think of an appropriate New Year’s thing to post when it hit me that I hadn’t played the late Kenji Eno’s very offbeat D2 in about four years. It works as a perfectly bleak yet eventually hopeful holiday horror game experience for the period between Christmas and New Year’s Day. Thanks to just being too busy to unearth one of my Dreamcasts, make sure the battery is working so that I could start playing about nine hours before midnight so the end credit sequence ends with the onscreen game clock counting down to the New Year and getting a cheery message for all that effort, I haven’t gone near this gem. But that’s going to change.

Anyway, backlog or not I’ll finally replay this classic at some point this year just to see if I can speed through it a bit faster. Much of the game’s length is due to extended stretches of cinematic sequences that can’t be skipped, so it’s a pay attention game almost all the way through, lousy US dubbing and all.

This should be interesting. I talked a Kinect-owning pal into buying Double Fine Happy Action Theater and I’ll be moseying on over to his place later to see what’s what. The XPlay demo last night made me do it, so blame them. Although, my heads up from him and his kids says the game is nothing but stupidly entertaining. In a really good way. If I don’t throw my back out kicking a pigeon or making fireworks with my fingers, I’ll be back with a review later tonight. Wish me luck…

Based on a majority of the posts over at the PlayStation Blog regarding Ubisoft’s upcoming Vita Action/RPG, Gameloft’s Dungeon Hunter Alliance is going to be a hard sell to those who’ve already played the game as an iOS, Android or PS3 release… and that’s too bad. The upcoming port of DH:A has enhanced HD visuals and makes use of the Vita’s front/back touchscreen sand accelerometer in an interesting manner. As I’ve never played any version of the game and love a good dungeon crawler (I don’t own an iOS or Android device and don’t use PSN these days) , I’m interested in reviewing this one on its own merits.

Sadly, it seems that nearly everyone criticizing the game is doing so solely based on the $39.99 price point and not the fact that those new Vita owners who may have never heard of the game before probably won’t mind supporting Ubisoft, Gameloft and Sony with a full-price retail purchase… provided the game is good. Herein lies the problem with launch software (well, one of many problems). If you don’t spend time creating an experience that favors both old as well as new players, the veterans will always be there to let you know you’ve” screwed up” (even if you really didn’t)… END_OF_DOCUMENT_TOKEN_TO_BE_REPLACED

Still plugging away on the old post reformatting/restoration project, so bear with me for a bit if you decide to poke around the older stuff on the blog. My advice to Nintendo, who reported some major losses and expects more this year leading up to the Wii U launch: ASK your consumers what they want. Don’t just DO stuff and expect them all to jump aboard. That may help a bit, as believe it or not, new tech aside, some people just hate too many surprises or huge changes. Granted, it stinks to be a total stick in the mud diehard, but those are the folks you need to guide into your brave new world…

No, I’m not talking about the upcoming elections here (eek), the horrific damage being done to the environment and people by this stupid fracking taking place in too many places across the country (double eek) or other more serious matters worldwide. I’m talking about the fact that last year’s “too many games!” issue is STILL just as revelant as it ever was… but with newer, shinier stuff on the horizon. Between the PlayStation Vita, Wii U, 2nd/3rd generation 3DS games, whatever Sony and Microsoft reveal at E3 (I’m expecting some hints of “next-gen” coming, but a more than solid lineup of games for current consoles for this year and next) and the insane amount of indie games hitting PC, iOS, Android and other platforms, it’s going to be a frighteningly busy year. Oh well, I’m just going to dive in and hang on for dear lif enjoying the ride, bumps and all…

While the holiday season is usually packed with happy jolly tidings and the usual mass consumer craziness (that’s turned some shopping malls into pepper spray scented war zones), it’s also a time for reflection and a bit of moodiness about current and future events. Winter also brings in a bit of depression, as we humans are also prone to go gloomy when the lack of sun and warmth hits hard, sending some into a depressed state. Kenji Eno and WARP’s final console game, D2 has been my go-to holiday gift for myself ever since it was released on the Sega Dreamcast in Japan back in 1999. I’m not going to do a full review of the game (there’s an older one I wrote posted here), but I will say that the game manages to capture the feeling of being inside a bad winter dream that you can’t wake up from, yet one that you don’t want to simply because you want to see how it plays out.  It’s definitely not for all tastes and in fact, can be baffling even when you piece things together into a more sensible narrative than what’s presented. On the other hand, the game also soars into unsuspecting territory a few times and packs an emotional punch where it counts. END_OF_DOCUMENT_TOKEN_TO_BE_REPLACED

While the company has seen its share of ups and downs (and a few sideways moves) over the past few decades, there's something about Atari that makes me hope they'll be around in some form for as long as people are around to play video games. Primarily a publisher for a good deal of the past decade, since 2004 they've been tapping into their history to produce a few different plug & play console variants in the Atari Flashback line. These units feature not only many classic games, but unreleased as well as homebrew tittles have managed to make it into the mainstream thanks to the small but dedicated team contracted to put the Flashback project together. As good as these systems are, I think Atari can bring things to the next level in a really cool way.Read more »

If you've been around for a few console cycles and managed to snag a copy of this game (which still fetches a premium price in some spots), you probably remember this shiny little gem from the “ancient” PlayStation days. It ate up nearly a whole memory card for saves, was brutal as hell and had endless replay value for those who loved it. Well, It looks like console owners may finally be getting another Diablo-like game after all… this time from the makers of Diablo, and I couldn't be happier.

According to a posting on the official Diablo III Community Forums:

“We're exploring a Diablo-related concept for consoles and are currently looking to fill a few senior console-related positions on the Diablo III team. As we've said in the past, with proper care the gameplay could suit the console platform, and we're interested in seeing what talent out there might be interested in such a project. If you're passionate about all things Diablo and have the requisite skill and experience, then head over to our jobs site to check out the positions and apply.

Please note that this is not an announcement of a console title. We are first and foremost developing Diablo III for Windows and Mac PCs and don't intend to allow any possibility of a console interpretation to delay or affect the release of the game.”

Reading that made me grin for a few minutes too long, but it's stellar news if it actually gets done at some point. Granted, the PC-only adherents are up in arms and whining as usual (in some over the top rants that make as much sense as a Rick Santorum supermarket speech). Nevertheless, I say it's one of the smartest moves Blizzard can make going forward and benefits everyone at the end of the day… Read more »

And here we go again. Last year, when EA unveiled SSX: Deadly Descents, the Internet descended on them in a rather deadly decent into all sorts of nasty name-calling and threats based on the trailer that showed the new installment was headed in a more action flick direction, something many die-hard SSX fans didn't want at all. Now, Namco Bandai is facing the same sort of crankiness based on a trailer that also doesn't even show any gameplay at all. Worse, some of the comments directed toward the game's dev team are at best, ignorant and at worst, more than a tiny bit racist. 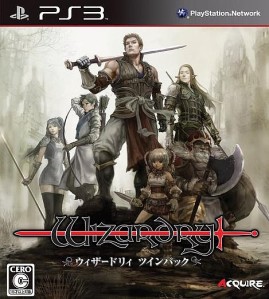 Sometimes, I just hate Japan, but in a decidedly more “grrrr… how come they get THAT game?” manner (and not anything more overly dramatic than that, mind you). While the Wizardry franchise hasn’t seen a new Western-developed PC game in the states since the ill-fated, (but mostly well-rated) Wizardry 8 (back in 2001!), since the late 80’s, Japanese gamers have had nearly 40 ports or completely original Wizardry games and side-stories created by an assortment of developers for a number of consoles, portables and even cellphones.

More recently (as in a big, fat “what the what?!”), the Nintendo DS in Japan has gotten their own original Wizardry games in the form of three titles that will probably never, ever see the light of day in English unless they get fan-patched translations (*grrrr!*). You can keep your Angry Birds, and other “casual” games, folks – I’d rather play something with real meat on its bones.