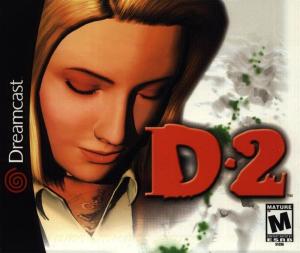 While the holiday season is usually packed with happy jolly tidings and the usual mass consumer craziness (that’s turned some shopping malls into pepper spray scented war zones), it’s also a time for reflection and a bit of moodiness about current and future events. Winter also brings in a bit of depression, as we humans are also prone to go gloomy when the lack of sun and warmth hits hard, sending some into a depressed state. Kenji Eno and WARP’s final console game, D2 has been my go-to holiday gift for myself ever since it was released on the Sega Dreamcast in Japan back in 1999. I’m not going to do a full review of the game (there’s an older one I wrote posted here), but I will say that the game manages to capture the feeling of being inside a bad winter dream that you can’t wake up from, yet one that you don’t want to simply because you want to see how it plays out.  It’s definitely not for all tastes and in fact, can be baffling even when you piece things together into a more sensible narrative than what’s presented. On the other hand, the game also soars into unsuspecting territory a few times and packs an emotional punch where it counts.

That’s the supremely unsettling intro movie above by the way. Terrorists, a mad sorcerer AND a meteor… er, “Happy Holidays!” Hmmm… I’ll bet you won’t be complaining ever again about a touchy-feely TSA agent or taking a trip through some body scanner after watching that. Small wonder this game hasn’t been given an HD remake (although it has a bunch of other issues that make the intro movie the least of the things keeping it from getting redone). The key to enjoying what happens afterward is to step outside of what you “expect” and just go with the flow Kenji Eno has set up. Trying to shoehorn the game into traditional storytelling or attempting to guess what happens next are simply losing propositions that will keep you from enjoying the ride. Of course, the clunky movement controls (if any game needed dual sticks and camera control, it’s this one), random battles straight out of an old JRPG and a few other issues don’t help much either. But, stick with it and by the time you hit the first big set piece (the plane crash site), you’ll probably be hooked in.

Taken as a standard “survival horror” game, D2 has enough weird monsters and gore to satisfy those particular cravings. Humans transform quite horrifically into green-blooded hybrids of plant, insect and mutated flesh with tentacles waving, nasty hissing and all. But the game also pushes other boundaries that even some healthy art asset editing from the original Japanese version couldn’t change. Sexual themes and bits of nudity are used in the most non-erotic and terrifying ways and parts of the game can be hard to sit through because they’re so tension filled. The bizarre English dubbing and mighty translation efforts that tried to disguise Eno’s overlong conversations by adding repeated or hesitated words in sentences only adds to the weird factor tenfold. However, if you pay attention as you play (or watch), there are some solid emotional moments in all that verbiage that resonate.

The general tone of the game is one of sadness, loss and unresolved emotions, but hope springs eternal (albeit weakly) in a few moments when the game wraps up a few key plot points. Spoiler alert: everyone dies in the game save for the “mute” Laura (who gets in a single word late in the game, but if you follow the story, you find out she talks in her sleep), but with one exception (poor Jannie!), those deaths have meaning that helps Laura in her long trip up the to face the final boss. In terms of gameplay, that final disc is the shortest, but most difficult of the four that make up the game thanks to the over-powered enemies that simply exist for you to beef up Laura’s hit points by gaining as many levels as possible before the ending. A healthy portion of the game’s running time outside of getting from place to place and fighting monsters is spent watching lengthy cut scenes that require your undivided attention. This is specifically true in the case where there’s nothing on screen except for falling snow and a calming voice of an important character key to the game’s story.

While there’s an overall plot at work here, a lot of the game can be seen as a stream of consciousness tone poem that puts a mirror up to the world and shows while it’s not as nice a place as some overly optimistic types believe, we’re not all doomed souls on the road to hell, either. Taking things to their bleakest point, it then whips the tablecloth off its twisted Last Supper scenario and drops a happy ending into your lap that lasts as long as it takes for the credits to roll. Sitting through them, you’ll probably feel depressed again for a bit until (and ONLY if you’ve played the game so the credit sequence ends before midnight on 12/24 or 12/31) “Merry Christmas!” or “Happy New Year!” appear on screen as the Dreamcast’s internal clock strikes midnight. I got a big smile the first time I played the game (I was having an awful year) and each time I went back to the game, I found something new I missed (the UFO Easter Egg on Disc 2) or something in the visuals to appreciate even more (the wood textures and detail in some locations is stunning).

Of course, maybe I’m just crazy after so many years of gaming, but I like this game a lot more than when I first played it about a dozen years ago. As bleak, frightening and depressing as it is, somehow, D2 is both a nice way to end a year that’s been bumpy with change and kick off a new one with a brighter view of the future in my head. Granted, if you don’t have a Sega Dreamcast or know someone who does, you’ll have to find your own offbeat holiday treat. As for me, I can catch Die Hard, A Christmas Story or Bad Santa any time during December. But I’ll always go back to D2 when I need some real spirit lifting when the sun drops from the sky and stays away for too long…