Hey, it’s not Friday, but it may be by the time I complete this post. Anyway, here’s a few more films I finally sat down and watched. It stinks not having a flick watching partner to bounce things off of, but so it goes. I suppose a resolution can be made to rectify that, but you all know that sort of pressure makes for an often crappy time when you go rubbing lamps hoping for the correct results (he noted, cackling madly). Anyway, some of these were screeners, a few were bought for the library and almost all come recommended for assorted reasons. 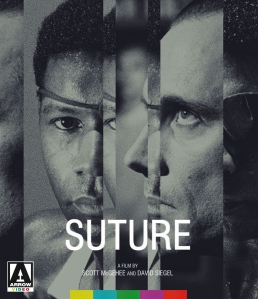 Suture – It’s a gimmick film with one huge gimmick, but it’s a good one and writer-directors David Siegel and Scott McGehee do a decent Hitchcock riff on a few fronts with this thriller/mystery mash-up. Shot in glorious black and white with a solid as a rock cast, this is one of those indie films that packs a wallop and isn’t afraid to use your brain as its target. The interesting thing is the film also works without the gimmick as a pure thriller, so you can indeed re-watch this and see it from a different perspective.

I saw this a few times in theaters back in 1993 and later on cable and it still works as a great little film worth tracking down. Arrow Video’s restoration job is great and you get way too many bonus features that make this an automatic buy right out of the gate.

END_OF_DOCUMENT_TOKEN_TO_BE_REPLACED

Here’s some news fresh from the “Wouldn’t You Know It?” desk:

Hooray! I won something awesome recently – a blu-ray copy of the Ivan Tors produced, Herbert L. Strock directed sci-fi film GOG (1954), restored into its 3D state and in HD for the first time on disc. Many thanks go to Kino Lorber, Classic Movie Hub and Aurora’s Gin Joint (all fine places to sit for a spell and learn about plenty of classic films) for picking my hastily scribbled entry. I also got two more Arrow Video blu-rays in the post today to review right after GOG showed up via Fed Ex: Dillinger and The Zero Boys. Excellent!

However (and this is hi-larious)… END_OF_DOCUMENT_TOKEN_TO_BE_REPLACED

If you’re an Arrow Video collector here in the U.S., things are about to get even more interesting in your library thanks to the company’s SIX April releases through MVD Entertainment Group. 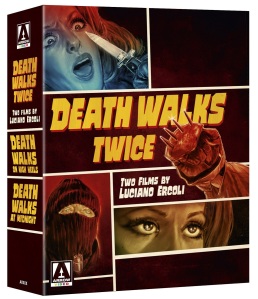 Only 3000 of this set will be made and as usual, Arrow is packing that LE box with both films and special features galore: