It’s somewhat surprising that with so many RPGs available on the Nintendo 3DS, the old-school dirt simple hack & slash sub-genre is somewhat underrepresented. Granted, you’re probably not going to get a fancy looking Diablo or Torchlight-style game up and running on the 3DS hardware without some miracle coding skill and Nintendo completely missed the boat on localizing the fantastic DS game Soma Bringer to the west some years back. Thankfully, Rising Star Games has taken up the chase ‘n chop mantle with Ishi-Sengoku-Den “Sadame” (heretofore shortened to Sadame for the remainder of this review).

The game takes the basic formula found in Blizzard’s classic franchise and adds a feudal Japanese setting, simplified gameplay and multiple routes through four acts that feature multiple routes which add replay value if you want to explore every inch of the maps. While the results aren’t flawless, gamers with more open minds and a willingness to deal with a few quirks will get a lot more out of what’s here than those who come in with a load of expectations.

The plot mixes in historical Japanese characters and that aforementioned setting, adds a hefty layer of assorted monsters to fight with mostly titanic bosses to face off against to end missions. While the game has three difficulty settings, the two harder play modes are locked out until you complete the simpler Dawn difficulty. You can only use one class per playthrough, but each one (Samurai, Rogue, Monk, Ninja) is powerful enough to get the job done and very fun to play as. For the most part, Dawn is a wee bit too easy from the outset if you use ranged attacks and the better gear drops you’ll get from completing missions. Even if you’re more of a “tank” player, wading into many fights on Dawn and making short work of the early enemies and bosses may give you the idea the game is way too simplistic for its own good. There’s a combo system in play, but you can get by with basic attacks and skills you learn when leveling up. 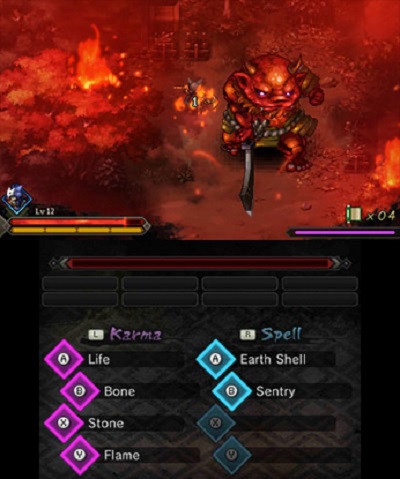 However, there are some normal enemies and bosses that will nail you in a few hits if they get too close and in later acts you’ll be besieged by enemies wielding ranged attacks from powerful magic to simple arrows shot from offscreen. You’ll also encounter charging foes that can zap your character’s hit points down to nothing if you’re careless. Unlike in many ARPGs, creatures in Sadame appear in separate waves and move somewhat slowly, allowing you to pick them off, sometimes in far corners of the maps. While chests and breakable objects cough up drops, enemy item drops are also handled differently. Once killed, the last foe in each wave drops random gear, coins and sometimes a merchant who becomes available once the level is cleared. Occasionally you luck out and “rescue” merchants from a crate or barrel you’ve busted, which is pretty amusing if you’ve played Diablo III and met/rescued Covetus Shen from the barrel he was hiding in.

The more merchants you rescue, the more types of items and services become available. There are standard merchants, gear upgrade sellers, rare item shops and other sellers of interesting and expensive necessities. The catch with merchants is the ones you rescue only appear after a mission and vanish once the next map is accessed. Additionally, you’ll acquire items for your hero or heroine that can only be used by another class in a different playthrough. Fortunately your item stash is saved and that powerful sword or other gear you couldn’t equip is going to be ready for that second, third or fourth character. That stash can only hold 500 items total, so you’ll be selling off lower-class gear frequently until you realize that you can slot found or bought gems into most of that gear to boost its stats considerably. One thing you won’t need to worry about is healing potions. Magic skills come in very handy and your character’s life and other resources slowly regenerate with those regeneration times increasing courtesy of certain items or skills as you gain levels.

There are so many effect combinations on non-slotted gear that adding customization to normal drops can be overwhelming, partially due to there being no way to compare equipped gear side by side to what’s in your inventory. It’s a big issue some will have with the game, but it’s not a deal breaker by any stretch of the imagination. While many shop’s items and services can be exorbitantly priced, starting in At 2-3 there are maps with open routes that have breakable objects you can “farm” for money and items to sell off at the conclusion of a stage. As you gain levels, you get one skill point per level up to assign to a dual skill tree and choosing wisely what to advance is key. You can boost your basic strength, defense, karma and so forth and so on, but adding elemental effects and buffs can help make shorter work of many enemies. 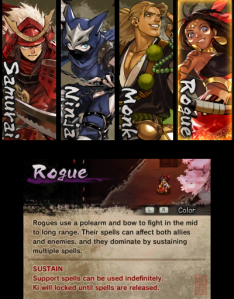 While pretty straightforward initially, maps soon become slightly tricky to navigate thanks to multiple paths, many of which are one-way and force you onward to the end of a level. There are plenty of well-hidden chests plus some maps with hidden areas that contain great random treasure or merchants you can use post-mission, but you’ll need to take time to locate them as the game has no map system. This has the effect of making the game seem a lot shorter initially, but if you’re a fan of this sortof game from way back you know looks can be quite deceiving. Speaking of looks, developer Mebius gives their baby a nice visual style that hearkens back to the Super Nintendo days with a decent variety of increasingly challenging monsters of assorted sizes. While the character animation is passable, it’s not as fluid as it should be in terms of the initial speed of the enemies. You’ll eventually get used to this, but then you’ll be thankful on the later difficulties that many monsters move slowly because they hit a great deal harder once you clear the game and move to the harder modes. Sounds are okay but a bit repetitive and the nice-sounding music is predictably scored with familiar Japanese instruments that lend an appropriate mood to the action.

There’s no online play at all, but Sadame has a Street Pass function were you can share your hero of any level with other players as an AI assistant and take on one for yourself. So far, I haven’t found anyone in my area playing the game, but I may need to make a trip down to the Nintendo World store in Manhattan just to see if I can collect a few fellow travelers. As for game length, while some reports of 4-5 hours are out there, once you get into discovering secret areas, replaying maps for extra levels (there’s a level cap of 99) and beating the game multiple times in order to try the next difficulty, you can expect to easily quadruple that time to close to 20 hours or more. Granted, the game would be even better with random maps, a better inventory system and perhaps a way to access shops mid-level plus a few more elements. But as I always say after playing something as cool and follow-up worthy as this… that’s what sequels are for.