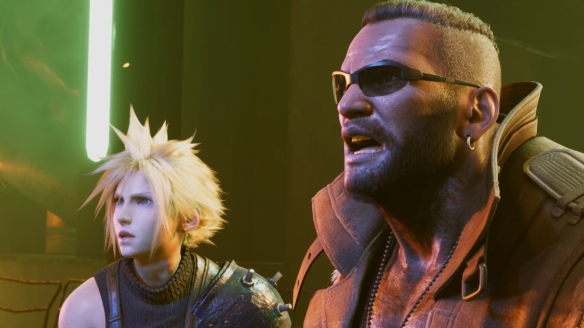 Honestly, I’d deliberately not followed any development news, interviews, screens and trailers of the upcoming FINAL FANTASY VII REMAKE because as I’ve said in the past many times, I prefer going into a game as cold as possible for the surprise factor and how that actually helps my sense of wonder continually activate, even if it’s a game that’s been re-imagined or has had multiple versions created over the years. In this case, the approximately 45 minute long Unreal engine-powered demo that dropped on Monday is visually, pretty spectacular stuff and the gameplay is a mix of styles  old and new, with a bigger nod to the new. This bodes quite well for the final version we’ll see on April 10, 2020.

I’ll resister my EXTREMELY middling complaints about the demo here just to get them out of the way first. I didn’t like the variations in destructible objects. Those wooden Shinra boxes you should smash up when you find them go down with a weapon swing by Cloud or a few shots by Barrett, but cardboard boxes, some crate-like objects, and a few metal barriers bounce or just get knocked around with no visible damage? Eh, well. Although, some striped sawhorse barriers hide handy items you can find once knocked away (explore everywhere!). My other minuscule complaint is with the music, which is phenomenal, but I want a choice of the original tunes as well as the new remake versions. As I said, these “complaints” are tiny, but this was only a demo and it does note, the quality isn’t 100% representative of the final game at all.

END_OF_DOCUMENT_TOKEN_TO_BE_REPLACED

A little game history goes a long way, folks. Chunsoft pioneered the visual novel game way back in 1983 with Yuji Hori’s The Portopia Serial Murder Incident and over the decades since, the company, now known as Spike Chunsoft has released a number of quality visual and sound novel titles primarily for Japanese audiences. Visual novel fans here in the west probably know them best for some solid titles that have managed to make the trip overseas such as the Danganronpa, and Zero Escape games on consoles and handhelds, along with the upcoming Steins;Gate, AI, YU-NO, and Zanki Zero games set to arrive soon on a few platforms. Yes, they’ve also done a bunch of other (and better known) non-adventure game classics. But as you’ve gone and clicked that link above, you can do that extra bit of homework yourself. Me, I’m here to chat up this spectacular new but old number you’ll absolutely want to check out.

Another game on the way is the stellar formerly Japan-only visual novel from 2008, 428: Shibuya Scramble, finally headed stateside for PS4 and PC on September 4. There’s a great demo out now on PSN that pulled me in right from its 70’s-sounding opening theme and had me playing through to both endings with a huge smile on my face. While it’s only a taste of what’s to come, the blend of text adventure, still photos and brief full-motion video clips makes this a quite impressive achievement even ten years after its release. It’s more or less a “choose your own adventure” game, but one where a failure state doesn’t necessarily end the game at all, but unlocks new story elements.

END_OF_DOCUMENT_TOKEN_TO_BE_REPLACED

Soooo, so THAT’S What Death Stranding is about (that’s an in-joke, by the way).

Oh, now this is (not so) amusing. I wrote up about 2000 or so words on a few upcoming games shown at E3, but WordPress failed me in not saving my draft (I’m staring at the “! Saving of draft failed” note in the upper left of the screen as we speak, grrrr) so here we go again, but in shorter form because I’m a bit ticked off about needing to redo what was a pretty decent post and I’ve got a few other writing tasks to accomplish. Anyway, it’s really hard to enjoy gaming as much thanks to the real world madness creeping into the hobby side of things, but there are way too many interesting games on the way to avoid.

Yeah, death, DOOM, and gloom are all the RAGE 2, but it’s going to be a beautiful ballet of bullets and bombs bouncing all over. Bethesda’s presser was pretty amusing because Todd Howard knew how to balance self deprecating humor with the business side of things as the company poked fun at itself and some gamers who tend to either not have a clue about game development (it’s not an easy thing) or maybe think some franchises are a bit overworked. On the other hand, this is one of those always fascinating developer/publishers where sequels are eagerly anticipated each time one is revealed.

I have no clue what Fallout 76 will be about, but I’m going to guess it will feel like the Fallout Shelter (which just dropped onto the PS4 and Switch) but set in a world four times the size of Fallout 4 (which is pretty massive). As my laptop died, I eagerly downloaded it from PSN (it’s free) and ended up playing longer than I thought. Or: I ended up saving my game so I could take a nap. I woke up a bit later and accidentally clicked on the YouTube button on my Wii U and ended up catching the beginning of the PlayStation press event. I was very surprised that I liked pretty much all that was shown I’ll get to those in separate posts after the show), but Media Molecule’s Dreams stood out as a game I really need to try out. Well, that is if SCEA ever invites me back to a press event in NYC. They seem to have cleared out their press list and I don’t hear jack from them these days. Boo.

I didn’t watch Microsoft’s presser because I don’t own an Xbox One (too many awful experience with Xbox 360’s dying on me). But I did check out the plethora of game trailers and found they do look nice overall. I’m not much into the Halo games (although I own them up to ODST and have played bits of Halo 4 at a friends place), but that teaser for Halo 5 showed off a pretty impressive engine. As for the AAA developers (EA, Activision/Blizzard, Ubisoft, etc.) I’ll be looking at those trailers over the next week and maybe posting thoughts. A lot of AAA titles seems set in a certain reliable sector where you get what you expect (which is both good and bad based on your desire to pay for extra content, season passes and the like), but I tend to gravitate to single player games or those where playing with others is an option.

What else? Um… Namco Bandai, Sega, Xseed/Marvelous, Devolver Digital and a ton of indie devs have WAY TOO MANY GOOD GAMES COMING. To the point that it’s just daunting seeing what they’re doing and where everything is going. I need clones, stat. Capcom will make a bazillion dollars with that Resident Evil 2 remake (which means we’ll be getting RE 3: Nemesis at some point hopefully before the planet explodes. As for Nintendo? Yeah, yeah, I’ll get to them in a day or so. I know they tend to do things differently, so they’re going to get er, special treatment. The Switch is selling like hotcakes, third party and indie devs are filling the roster with excellent games and yes, the first party stuff is the mostly evergreen stuff they’re well known for. Back in a bit – I have a few demos to try out.