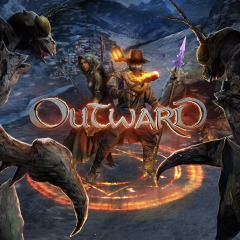 For the record, I wanted to dislike Outward ($39.99) less than 15 minutes in after nearly dying during the tutorial thanks to an near-invincible enemy guard whose health never seemed to drop past a certain point and kept regenerating far too quickly to be reasonable. During my digital near-death experience, I ran away to recover, only to return and find he’d just *poof!* simply disappeared from the spot where he and the other guard I’d dispatched were placed. I recall my eyebrow arching up and letting out a “Great.” before resuming play with the hope things would go more upward before I got too far outward. Fortunately, they did (well, for the most part).

There were a few other issues with the game, such as items randomly vanishing from the bag I was carrying, my character or an enemy getting stuck in certain parts of the map when doing certain actions, and a few textures that could have used a bit more polish, among other things. I decided after a random death that had me unable to locate my bag when I resumed, to stop playing for a bit and move onto a few other games while I held out for a patches to correct these issues. That waiting turned out to be a good thing. Over the last few updates the game became much better and is now a solid recommend for those who want something fresh and furiously challenging. There are still a few pesky bits, but I’ll get to those later.

That said, prepare for a completely punishing game experience that combines fantasy RPG, survival game and simulation elements with a very welcome two player split screen mode and the option to play online with a friend or total stranger. In fact, preparation for every obstacle the game will throw your way is a huge part of surviving, to the point where you’ll be playing this with a keener eye to (at least) staying alive for as long as possible. Once you’re out in the open world of Aurai, your brain needs to go into invisible mommy mode before you get busy with that questing, so get ready to take *everything* under consideration. Do you have your traps prepared? Got enough clean water? What are you wearing for the weather? Did you pack your lunch? Clearly, this isn’t a game for those who don’t like to be reminded that rote carelessness other RPGs let you get away with won’t be rewarded by anything but an easier demise in this game.

Still, even after you get used to the preparation aspects, expect death to come calling regularly like early morning doorbell-ringing proselytizers cheerily chatting on about the end of the world the moment you poke your head outside. Oh wait – hold on a sec… someone’s at the door… What, so early in the day for this? Gyaaaaah.

A quiet moment to contemplate, but don’t spend too long thinking, as darkness brings a whole set of problems you’ll not want to deal with.

The game will also truly frustrate certain types of players from “save-scum” addicts who rely on reloading to progress past the hard bits (the game has a sole save file that overwrites as you play), those who like jumping or grabbing ledges to get away from danger (there’s no jumping in the game), and anyone who simply despises crafting and/or survival elements in any game they play. Just about everything can and will kill you from bad food to enemies that will chase you down and poke at you or hit you with spells until your stamina and life run out. Even the common act of hoarding  what you think you need is penalized somewhat significantly as carry weight matters and yes, you’ll be dropping that precious storage pack in order to fight more efficiently. Or else.

The game also handles dying in a unique way, as you’re going to be revived in a random manner, ending up in one of a number of places without your pack or sometimes, any gear at all. Sometimes this can be beneficial, other times,  eh, not so much. Waking up in an enemy camp with all your stuff gone after a ton of hard work is no picnic when you need to figure a way the hell out of Dodge and not die (again) in the process. The funny thing is, once you get a handle on the complex stuff, the game is quite a thrilling ride and highly replayable because of the many options open as you try and die (or die less than you think). 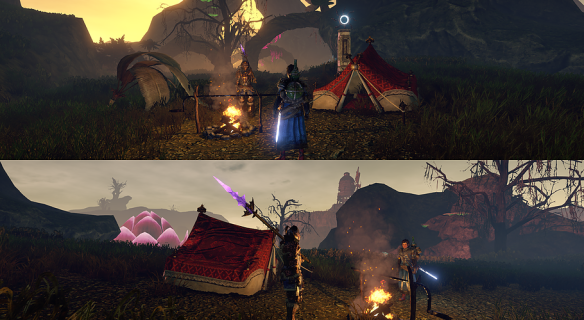 “Well, TWO can play at that game!” is actually a recommended strategy here if both people are ready to tackle the tasks ahead.

Combat requires thought (and traps, traps, traps) and you’ll discover even after you think you’re hot stuff that engaging multiple enemies without thinking things through is a frustrating way to play. Magic needs to be prepared and cast so you’ve enough time to unleash a spell that hits its target(s), and even weapon skills require timing and precision. With a like-minded couch pal or online, the game opens up even more when everything is clicking along and those enemies drop in rapid succession. Still, it takes time to configure and reconfigure between bouts, so patience is definitely a necessary component to success.

Traveling the land is perilous (and night travel can be truly frightening at times), but rewarding as all sorts of optional quests, skill trainers and yes, lots of treasure await the hardiest of explorers. All this just because your character starts the game in debt and has to pay if off but can’t make that deadline. Yep, you’re just an average Joe or Jane from the grand design breaking their back to get your home back, are forced out to make some money and end up a pretty well-seasoned (but still fragile) person for it. While the story is more or less a handy red herring pointing you to all sorts of well-rendered locales, it gives developer Nine Dots Studio a chance to craft up some lovely environments packed with all sorts of mundane to exotic creatures (most of which want you dead) and lets you choose how to proceed.

As noted, many issues that plagued the launch version have been fixed, but you’ll occasionally run into a few connection hiccups when playing online (although this seems to be more a flaw with PSN and assorted wireless connections some folks have to deal with), and while improved, you’ll still see some low resolution textures on characters that make them look like they’re visiting from a last-generation console. Still, this is a game where once you clear an area or before you get into trouble with enemies, it’s frequently beautiful when you stop to take in a your surroundings. The music is also quite good, but if I had to nitpick, I’ll say the voice acting tends to run in the hit or miss category, but is acceptable at the end of the day.

Amusingly enough, I actually have a vanity request for the dev team I think everyone who plays this will appreciate: the game’s title screen needs to replace the generic hero from the tutorial with the player’s own created character just so each person who plays feels as if they inhabit the game world even more. I’d also imagine players who really get into the game will end up creating galleries of their created exploits to share online at some point, so who not have a title screen for them to show off? Eh, it’s just a thought, but it’s one coming from me about a game I initially thought I wasn’t going to like much after those shaky first impressions. I’ll be going back to Aurai at some point (sooner than later, backlog willing), so perhaps I’ll see some of you there? Even if not, go give Outward a try because it’s going to grab you in a few ways you might not expect.