With Reverie, New Zealand-based developer Rainbrite has cooked up a fantastic, fun and must-buy game for the supposedly ‘dead’ (but still defiantly breathing) PlayStation Vita. Everything here clicks from the Earthbound-inspired visuals to the gameplay that references The Legend of Zelda‘s puzzle, enemy and trapped-filled dungeons and overworld map. Adding to the perfection, you get an interesting take on the Māori myth Māui and the Giant Fish woven throughout the game that makes the adventure all the more interesting.

Sure, the main character is just a nondescript kid named Tai who just so happens to end up spending his summer vacation saving the tiny island he’s on visiting his grandparents from all sorts of evil during his stay. But Rainbrite has wisely made the kid quite the young man of action on his trip to this new Adventure Island. You’ll get a cricket bat, yo-yo, a sort of Nerf gun and other goodies as you take on the game’s six nicely-sized dungeons and a somewhat dangerous overworld packed with local wildlife out to gnaw or peck you to death. Spot-on controls help out here, but you’ll need to be constantly on your toes because some enemies (such as angry hopping statues) won’t react until you’re in whispering distance.

END_OF_DOCUMENT_TOKEN_TO_BE_REPLACED

If you do this writing about games stuff long enough, you tend to go into media events with low to no expectations. Not because you’re jaded, mind you. It’s more because going in blind works better at getting one’s surprise meter better tuned when something actually does blow one’s mind. That said, I knew as soon as I heard the names Big Huge Games and Tim Train, I knew I had to prepare to be surprised and thrilled at what they were going to show. DomiNations (published by Nexon) is the name of the company’s new game and it’s a free to play mobile game that just so happens to be a real-time strategy game with a light world history theme. Sure, there are plenty of mobile RTS titles out there from Clash of Clans to Game of War and so forth and so on with fantasy themes. DomiNations adds some familiar bits of PC classics Train and Brian Reynolds have worked on such as Civilization II and Rise of Nations while making sure to be entertaining enough that anyone can hop in and play within a few seconds. END_OF_DOCUMENT_TOKEN_TO_BE_REPLACED

So, I’ll probably need to buy a new PC after all thanks to Polish developer Warhorse Studios and their incredible-looking (and still in development) game, Kingdom Come: Deliverance. That trailer below says and shows it all and the “Dungeons… and No Dragons” tagline made me laugh out loud because I thought of it as I was watching the footage and picking my jaw up off the floor. Crytek’s versatile CryEngine 3 is really getting a workout here and that realistic medieval setting is even more intriguing. The game was a successful Kickstarter project that got a great deal of attention and over $1.7 million in pledges. The game is still being funded by new backers on the official site and to date, almost $2.2 million has been raised, meaning people REALLY want to see this game come to a PC or next-gen console near them next year…

END_OF_DOCUMENT_TOKEN_TO_BE_REPLACED

Well, holy wow. I knew veteran developer Omega Force was tinkering away on some next-gen, er, CURRENT gen stuff, but yikes. Yeah, yeah, yeah. To SOME of you folks, this is yet another Dynasty Warriors “re-skin”, but to me, it’s another way for Sony and Square Enix to rip money out of my wallet. I know some DQ fans more used to the turn-based or not at all action heavy role-playing games in the series are probably tearing assorted hairs out in assorted places on their bodies that this isn’t a “normal” RPG. But me, I love this sort of mash-up because it brings new gamers into the fold while also catering to the more open-minded fans of this classic series without compromising on the familiar elements that make it so popular. And besides, it looks as if Square Enix is calling this a RPG, so it looks like it’ll be more of one than those other Musou-mixers that have come previously. Okay, and the game looks INCREDIBLE, to boot .

That, and it’s just a fun and funny as hell trailer as it goes on. Yeah, I guess I finally need to save up to buy my own PS4 and stop using one that’s getting not as much use as it should. 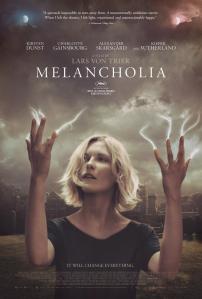 Quite possibly the best end of the world movie to date (provided you aren’t expecting something along the lines of an Irwin Allen-style Hollywood blockbuster packed to the gills with overpaid celebrities), Lars von Trier’s Melancholia is also a surprisingly beautiful film despite the fact that everyone dies at the end. Er… Surprise!

Actually, the film spells its not so big secret out in the stunning opening montage and its two acts play out in operatic fashion as things unwind in the lives of two sisters and how they deal with the impending disaster. Even though you know what’s going to happen, von Trier’s focus on the pair and the more intimate events in their small part of the world makes for compelling viewing that keeps you watching until the very end. Even if you don’t like some of the director’s previous films, this is one of those essentials that’s not as depressing as you’d think thanks to some excellent performances all around and some truly gorgeous cinematography.