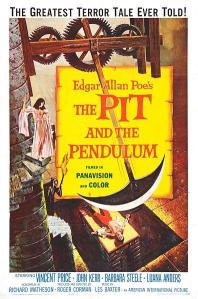 So, here’s how MY Saturday night went. I’m sitting in the living room watching “The Price of Fear” marathon on This TV (which seems to be an offshoot of WPIX here in NYC that shows better movies, albeit edited for network standards) and during a commercial break in The Pit and the Pendulum (I know, I know – but I can’t pass up those Vincent Price/Roger Corman films anywhere they’re aired), I heard some loud music booming outside from someone going deaf in his or her car.

A few seconds later I end up nearly falling off the couch laughing because the song playing with its bumpy bass hanging out the window is none other than Tone Loc’s ode to lousy overpriced wine, Funky Cold Medina. Bwah and ha. Suddenly, my Saturday night got a great deal more interesting…

END_OF_DOCUMENT_TOKEN_TO_BE_REPLACED

Okay, this one’s a doozy, folks. From early 2004 to around 2007 I was writing for a now defunct gaming site called Bonusstage.com and when the site died its untimely death after a series of DNS attacks and a double server crash or something did it in. At the SAME time, the computer I’d been using to work and game on had its hard drive burn up, putting me out of action for a time until I could get it replaced. As I wasn’t able to salvage the drive and thought foolishly that “What’s on the internet stays there FOREVER!”, I thought that whatever I wrote would be around no matter what happened. Welllll… I was wrong.

Long story short, a huge chunk of work I did wasn’t fully archived when the wheels of fate all locked up at the wrong time, I wasn’t backing up stuff properly at the home office and when you add those together, it’s a big fat mess. Or NON-mess, as there’s nothing to clean up but some crocodile tears… END_OF_DOCUMENT_TOKEN_TO_BE_REPLACED

So, today I was bad, bad, bad. Well, just bad, but I think I tend to over-magnify stuff for excess emphasis. Anyway, I needed to go over some older posts and start the process of re-writing or re-rewriting them so some can be used as parts of a few upcoming blogathons I’m participating in. Some of the older posts are a wee bit on the short side and need a bit of expanding, so that’s what’s going on. Or WAS supposed to be going on.

Anyway, I was going over a few posts and then got distracted with a movie I’d wanted to see, so that was that for productivity for most of the afternoon. Yeah, it happens. NO, it wasn’t Star Crash, I was sidetracked by (Oh, hell nope!). That’s just to show my desire to stop time for long enough to do all the crap I need to do and feel HAPPY at the end of each day. Eh, I’ll figure this all out eventually. I still want a damn time machine, though.

As I update the older posts, I guess I’ll tweet them out (which means they’ll pop up on facebook as well). Keep an eye peeled… 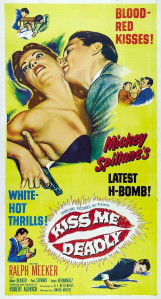 If you’ve never seen this Robert Aldrich-produced and directed film noir masterpiece, drop what you’re doing (well, unless you’re operating heavy machinery or in the middle of something where dropping anything will cause a major or minor disaster) and go look this one up. You’re guaranteed to say something like “What the…” at least two or three (or a dozen) times while watching this one, trust me. Mike Hammer is supposed to be a hard as nails private eye, but in this flick, he spends about a quarter of the film either getting chased, beaten up, shot at and otherwise maimed by assorted people who want him out of the picture he’s supposed to be starring in.

Deviating quite dramatically from the Mickey Spillane novel, this one’s a blazing hot mix of a downward spiral into a particularly dark hell for private eye Mike Hammer (masterfully played by Ralph Meeker), who has so many brushes with death here that the film ends up having a nasty comic edge thanks to the level of violence on display. No one here escapes unscathed, as everyone either wants Hammer dead or disabled (or both) and the few people on his side tend to drop like flies or come pretty close to it. The film also offers up a big twist at the end that turns it into a sort of wild sci-fi flick, but I won’t spoil that surprise other than to say it’s a big reason the film is so insanely brilliant…