Oh, boy. Invading space aliens with planetary conquest on the brain beware! Duke Nukem 3D is back and yes, it’s freakin’ 1996 all over again. Personally, I love the big, macho lug because he’s a COMPLETELY fictional videogame character who’s larger than life, impossible to confuse with any REAL-LIFE person what with his over the top vices, uber manly urges and penchant for snazzy one-liners mixed with threats to wreck and harm with extreme prejudice. I know no one like that in real life and neither do you, right? Oh, okay, okay… THIS GUY counts.

Um, Anyway… thanks to Gearbox Software, the man himself is BACK in action in a kinda throwback re-look at his biggest adventure with a few additions for a measly $19.99 on Steam, PS4, and Xbox One. GROOVY. Get it, I say. Review incoming shortly, as I see the King has followed me home.

Tomorrow is the big day for fans of this non-stop and often hilariously violent first-person shooter/loot-fest franchise, so here you go. I’m actually glad that Gearbox decided to give the old consoles where the series still has its largest user base this new game instead of forcing it onto the PS4 and Xbox One where it wouldn’t sell as well. Yes, they COULD have done it for all four systems, but I think they want to make that next Borderlands LOOK more like it belongs on those more powerful systems than just whip out a slicked-up enhanced version. Good for them, I say. Anyway, Borderlands: The Pre-Sequel launches October 14, 2014 in North America and October 17, 2014 everywhere else.

Hey, Kids! Wanna know how video games are made? Well, this video doesn’t go into ALL the not so gory at all details, but it IS a fun watch if you’re intrigued. Gearbox Software seems to be a fun enough place to work, although some gamers with too much time on their hands and rickety soap boxes to stand on will give them eternal grief for at least two games they’ve worked on until the Earth rolls off its axis. Me, I just move forward and keep an eye on what they’re doing next. Borderlands: The Pre-Sequel isn’t made entirely by the studio, but you know 2K Australia is using what Gearbox has created in this collaboration to whip up this spaced-out loot frenzy that happens to take place in the fun-tastic Borderlands universe.

Given that this one is only on PS3, Xbox 360 and PC, I’m betting some of you are kind of ticked off that you traded in that “old” console in trade for a newer one, right? Oh well. Next time, don’t trade in or give away any system until you ONLY see budget games coming out for it. Or even better, NO games at all. That way you’re SURE there are no surprises coming down the pike…

At this point, I expect nothing but serious FPS action, super stylized cel-art visuals and plenty of oddball humor from any Borderlands game (well, except Telltale Games’ upcoming soon to be mega-hit adventure take on the franchise that may have only two of the three elements mentioned, Tales From The Borderlands), so it’s good to see that Borderlands: The Pre-Sequel isn’t going to disappoint at all on the crazy front. This is one of those “old reliable” evergreens that’s good when you start playing and still packing heat months and years down the road thanks to it hitting that sweet spot between fun to play and “one more hour” addictiveness. It’s the bottomless pint of ice cream of games, folks! That’s how I’d describe the experience to someone wondering what all the fuss was about. That and argyle patterned weapons as an option? Yeah, that’s a win right there, although it does make for really crappy camouflage (unless Moon monsters can’t see argyle, of course)…

Okay, so it’s the name of an old basketball primer for kids, but that’s also a fitting description of what Gearbox and 2K Australia expect a great deal of you Borderlands fans to be doing in Borderlands: The Pre-Sequel, the upcoming standalone game set for a fall release on PS3, Xbox 360 and PC. Sorry “nest-gen” fans! You’ll need to wait a bit while the game you wanted or expected NOW or sooner is being cooked up in one way or another for its eventual release whenever.

While I’m sure that Gearbox and 2K Games could make a small fortune redoing the older Borderlands games and DLC from the ground up, I’d gather they’re doing the WISER thing and creating an all-new chapter to the franchise that packs in even more of what’s expected. This will also keep owners of those shiner (or matte-r) new systems from rioting and storming assorted game company headquarters anytime soon, too (er, Ha-ha?). 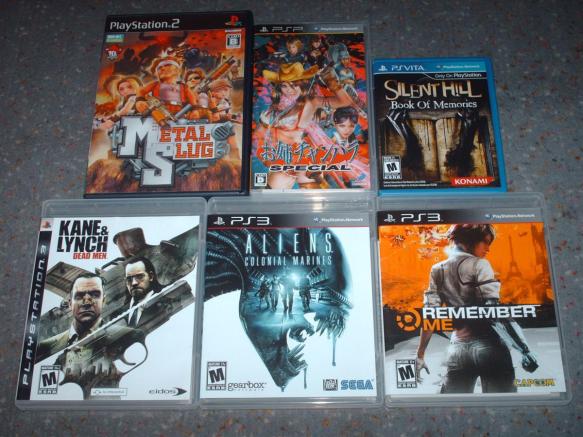 Hokay, I have some ‘splainin’ to do here:

I’ve played both Kane & Lynch Dead Men and Kane & Lynch 2: Dog Days, but I’ve never actually owned the first game until a few weeks back when I saw this in a stack of games some guy was selling at a sidewalk sale. Two bucks? No problem. As for the much maligned Aliens: Colonial Marines? I never played the demo and didn’t see that footage everyone says was mocked up and not representative of the final product, so the whole controversy went over my scalp. That said, I nabbed this sealed with ALMOST all the collector’s edition goodies (no Power Loader) for ten bucks, which may seem like too much based on the acid spewed upon the game worldwide. I’ve only played about an hour and while it’s far from great, as a FPS, it’s got some fun bits here and there. My money is on Alien Isolation being a more compelling experience and provided the dopes lurking and jerking on message boards REALIZE that the new game is from a C-O-M-P-L-E-T-E-L-Y different development team known for all of their games being solid experiences through and through.

Remember Me? Yes, Nilin… I do, my dear. I played the PC version (thanks, Capcom!) and loved it for the most part. Capcom also kindly sent me the Xbox 360 version, but I couldn’t play it when I got it thanks to my two busted 360’s collecting dust here. So, I gifted it to a friend so he’d crack it open (and let me review it at his place, of course) and ended up picking up the PS3 version recently for about five times less than what it retailed for last year. As for Silent Hill: Book of Memories? I love Wayforward’s games and the demo of this Vita exclusive was interesting in a “Hey, it’s like Diablo, but NOT!” manner. A few levels in, and I read that the game is pretty much the same thing from beginning to end, but has a level cap and some other stuff that makes it a bit tedious. I haven’t reached that point yet, but thanks for the forewarning, Internet… END_OF_DOCUMENT_TOKEN_TO_BE_REPLACED

I did not go to PAX East this year, but here’s a tiny sliver of what I missed. I’m not keen on conventions these days because I prefer being a fan who just PLAYS the games, not one who goes all out and dresses up like a favorite character or does anything else that keeps me away from a controller for too long. Granted, I admire ANYONE who has the guts to squeeze themselves into a costume that’s either hand made, cobbled together from what’s in the closet or store bought. I’m just way too busy poking around in assorted game worlds looking at stuff and admiring the hard work that goes into making them to get busy behind a sewing machine or makeup mirror. As for fan art? I’ve done my share and then some over the decades, but these days I’m more of an idea guy than anything else.

Well, actually, this is 2K Australia’s fault, but still, I blame Gearbox for creating the unstoppable juggernaut that is the Borderlands franchise (one of the only shooters I’ll still play because of the wild, stupid fun to be had and SO many millions of weapons to discover and collect). Wow. Okay, I ignored this news earlier at first because I’d just woken up and thought it was either a late April Fool’s joke or just a joke, period. Ah ha ha… the joke was on me. So, this is happening and it’s coming SOON. As in this Fall 2014 to Xbox 360, PS3, and PC. Yeah, THAT’S RIGHT, dammit – the “OLD” consoles are getting this BEFORE the new ones because 2K Games is SMART and knows there are still more millions of you (and me) out there who haven’t committed to one of the new systems just yet. They’re getting my money (again!) for sure…

And by “Legendary”, I mean you’ll be lost for hours in these digital worlds these two new collections have packed onto those discs. The first bundle features the multimillion selling titles The Elder Scrolls V: Skyrim and BioShock Infinite and the second bundle features everyone’s favorite FPS/RPG hybrids Borderlands 2 and Dishonored. I’d highly recommend these to new players who’ve yet to play these four modern classics, but collectors may also want to snap these up as it’s a pretty good value for the content you’re getting. Granted, the cheapskates out there who always buy stuff on sale may disagree, but 2K and Bethsoft aren’t targeting you anyway (nyah!). Ah, so many, mnay games… so little time to play them!

I have the feeling that Telltale Games’ genuine PR guru, Job Stauffer, has some sort of powerful hex action going on at the offices there, as ever since he’s been on the job, a lot of really nice games have started popping up from a few developers and into the eager hands of gamers worldwide. Okay, Telltale already had some great titles before he started working for them, but when you have The Walking Dead (One game, an expansion and a second title on the way soon), A Wolf Among Us, and now Game of Thrones and Tales From the Borderlands as properties to represent, you’re either REALLY damned lucky or you’ve got a voodoo spell in play that may cost you your immortal soul over time, but assures you’re remembered forever as “That AWESOME PR guy” by anyone who speaks your name. Of course, NOW that I’ve spilled the beans, I suppose someone somewhere is making up a little doll that sorta looks like me that’s about to get some vintage hatpins shoved into it with relish. Ouch. Ouch, ouch. Okay, I’m just practicing now… I’ll need to same my screaming voice for later on when the actual pain hits…

In plain English: Man, I can’t wait to play these.

Psst! Um… Hey, Job? You can stop now with the old hatpin counting and doll making. No one really READS my site anyway, heh!