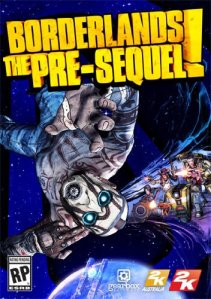 Okay, so it’s the name of an old basketball primer for kids, but that’s also a fitting description of what Gearbox and 2K Australia expect a great deal of you Borderlands fans to be doing in Borderlands: The Pre-Sequel, the upcoming standalone game set for a fall release on PS3, Xbox 360 and PC. Sorry “nest-gen” fans! You’ll need to wait a bit while the game you wanted or expected NOW or sooner is being cooked up in one way or another for its eventual release whenever.

While I’m sure that Gearbox and 2K Games could make a small fortune redoing the older Borderlands games and DLC from the ground up, I’d gather they’re doing the WISER thing and creating an all-new chapter to the franchise that packs in even more of what’s expected. This will also keep owners of those shiner (or matte-r) new systems from rioting and storming assorted game company headquarters anytime soon, too (er, Ha-ha?).

I did not go to PAX East this year, but here’s a tiny sliver of what I missed. I’m not keen on conventions these days because I prefer being a fan who just PLAYS the games, not one who goes all out and dresses up like a favorite character or does anything else that keeps me away from a controller for too long. Granted, I admire ANYONE who has the guts to squeeze themselves into a costume that’s either hand made, cobbled together from what’s in the closet or store bought. I’m just way too busy poking around in assorted game worlds looking at stuff and admiring the hard work that goes into making them to get busy behind a sewing machine or makeup mirror. As for fan art? I’ve done my share and then some over the decades, but these days I’m more of an idea guy than anything else.