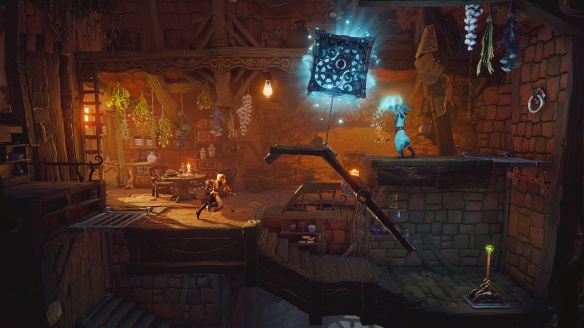 There are a few ways to handle this…

Absolutely beautiful and back to its 2.5D roots (although I did like the last game, I seem to be in the minority, so I’ll shut up about it), Trine 4: The Nightmare Prince ($29.99) is a wonderful and wonder-filled visual treat. Solo play is excellent, but It’s also great to play with a few friends for the engaging co-op and unlimited modes, which become more of a blast when you get new players in on the fun who’ve never tried this series before yet manage to come up with some quirky and/or intelligent out of the box means to solve some of its puzzles. Amadeus the Wizard, Pontius the Knight, and Zoya the Thief are back and in an even more stunning to look at game packed with enough content outside the story to last a while. The main game has a pretty basic story, but there’s a good deal of replay value when you get a few friends and get to messing around.

Developer Frozenbyte’s choice to let players cook up their own solutions to puzzles is a genius move where the game never gets dull because there will be those moments when someone pulls of a nice move and discovers either through trial and error or just mucking around for fun how to proceed. In solo mode, the game is great stuff, as switching between its trio of characters and using their powers comes off easy. Well, battle sequences aside where some solo players may want to rely on switching to Pontius and his trusty sword and shield until because he’s usually best at dealing with those shadow beasts quickly. The other team members do fine here (and as you play through the game, all get some nifty skill upgrades), but for my tastes, I used Pontius whenever I could for combat.

Even though the game world is presented as a side-scrolling affair, developer Frozenbyte has lovingly packed so much rich detail here that some areas feel as it you can travel out of the boundaries and go off in the distance if you wanted to. The gorgeous fairy tale looks and excellent character animation help bring the game to life and it’s all family friendly stuff right down to a few exaggerated, oversize boss enemies which manage to be both somewhat comical and scary (well, not that scary). In the game, a young and somewhat reckless prince tries to learn some powerful magic outside his skill level and our heroic trio get reassembled as a team and have to go after him. Unfortunately for them, he’s actually got a few tricks up his fancy embroidered sleeves. Can you say dipping our three heroes’ minds to bring forth nightmares, folks?

END_OF_DOCUMENT_TOKEN_TO_BE_REPLACED

While they’re not a household name yet (but they should be), publisher Modus Games has a number of current and upcoming titles that should please those looking for a bit of variety in their gaming lives. From the return of the Trine series to its side-scrolling origins to three new (or new-ish n one case) IP set to arrive on the scene between this year and 2020, all four games I saw at their press event in NYC were looking great and are well worth waiting for.

Ary and the Secret of Seasons (in development, PC, Switch, PS4, Xbox One)- My first stop was a game with an intro trailer had me laughing out loud for a few minutes because it hit my particularly oddball sense of humor right in the sweet spot. It turns out the game in question is actually a bit more serious in tone yet looking like quite a blast to play. Co-developed by eXiin and Fishing Cactus using the versatile Unity engine, the game intentionally recalls classic mascot character action games of the 90’s and early 2000’s with what’s looking like a strong emphasis on both story and gameplay.

While the demo wasn’t a hands-on one, watching Ary get put through her paces by eXiin’s Sébastien Le Touze kept me smiling constantly. Her season controlling powers allowed for some great puzzle-solving solutions as well as some thrilling combat moments and yes. those powers sure looked great in motion as they affected the environments around then in real time. The ability to change the weather in an area to rainy meant lightning zapping those pesky hyenas or ice hindering them briefly while Ary’s slingshot and sword skills knocked them for a few loops. Granted, the demo had all her powers unlocked at the start, but that was simply to show how versatile she’ll become as the adventure progresses.

The aforementioned puzzles can be solved in a few creative ways such as creating a large bubble of water to hop into and swim up to a high spot in order to flip a switch, or temporarily freezing an object or obstacle in order to pass safely before you free it and let it take out some baddies. Combining season powers is also key to some areas and Le Touze certainly did a stellar job in showing off what Ary could do. While it’s not set to launch until 2020, it’s a sure bet to be on quite a few watch and want lists, mine included.  If and when eXiin can get a demo of some sort up for everything this will appear on, I’m betting the game will find quite a few more eager fans ready to explore its pretty game world.

END_OF_DOCUMENT_TOKEN_TO_BE_REPLACED

Amusingly enough, no sooner than I post that Wii U article below, I get an email with a complete launch/launch window listing. For those not swimming in gaming lingo, the term “launch window” is a rather broad one that includes games on the way within a few months of a console’s release. In this case, the Wii U launch window is defined as the period beginning Nov. 18, 2012, and ending March 31, 2013. Also note that this list doesn’t include a few titles shows as just in development (Bayonetta, for example).

END_OF_DOCUMENT_TOKEN_TO_BE_REPLACED

The original Trine was a blast of fresh air, mixing action, platform jumping, puzzle solving and fantasy elements almost flawlessly in a solid, engaging PC (and later console) experience. The sequel, Trine 2, has just hit PC and Mac courtesy of Atlus and is a must buy game whether or not you’ve played the original. Just take a look at the trailer above and try not to reach for that wallet… See? Me, I’m holding out for a retail release like the first game that doesn’t tie me to a download service, as I’m not a big fan of losing that much privacy. Anyway, PS3 and Xbox 360 versions are coming soon via PSN and XBLA, so keep an eye peeled for those soon!

FrozenByte’s absolutely beautiful physics-based action/adventure is one of those great games that keeps classic gameplay alive and well. While this one is all is set to hit PSN and Xbox Live soon, it WOULD be nicer to also see a disc release with the first game as well as Atlus’ other download-only hit, the offbeat brawler/shooter/action game, Zeno Clash. Not all core gamers have access to PSN or Xbox Live accounts, so making sure they have the same opportunities to play as many of the games everyone else does should be a priority for all publishers until we see as close to 100% of the user base with high speed connections as possible. More games for everyone at both retail and online means more money for game companies and developers, right?