Not to put too fine a point on it, but for my money, Deadly Premonition: the Director’s Cut was and is one of the most beautifully bizarre and unique horror game experiences to date. Its bat-crap crazy elements and deadly serious story bits combined with the intentionally dated visual style and many hours of open-world gameplay to provide a highly replayable game experience once you got over and used to its many quirks. Given that I’ve probably written more kooky articles about the game than anyone else (well, that’s what I’ve heard), I’m telling you PlayStation 3 owners who happen to also be horror game fans who’ve yet to give this game a try that now you NEED a copy even more than before. 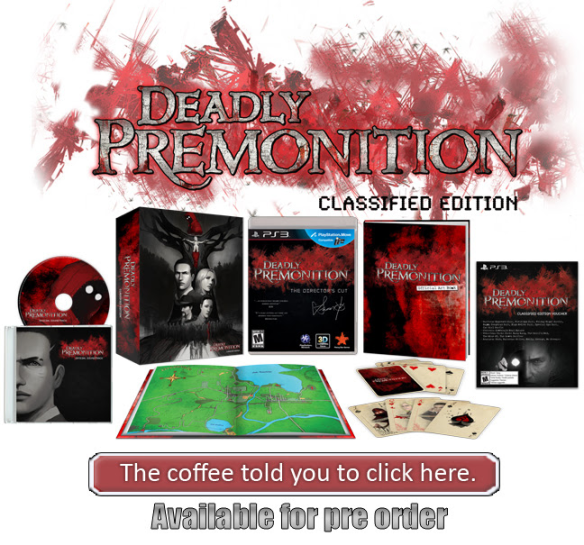 Yes, you absolutely NEED this, Zach!

Thankfully for you, the NISA Online Store is taking pre-orders for this ultimate edition of the PS3 version of the game. In case you still haven’t clicked and whipped out your wallet, here’s what’s in the box:

Deadly Premonition: The Director’s Cut physical copy for the PlayStation® 3
Classified Edition DLC Voucher containing all DLC for the game (It’s all in the details)
Hardcover Art Book 6.75 in x 5.25 in (A book with some unique images inside)
Official Soundtrack 25 tracks with jewel case (Not available before on compact disc)
Deck of 54 Custom Playing Cards (York’s favorite)
Collector’s Box (A good way to keep everything safely tucked away, out of the light)

Given that I’ve played through the game at least five times already (not counting the Xbox 360 version), finding time to do so again won’t be tough. But I can’t let myself become too obsessed, Zach. Actually, I’m much more interested in all that bonus content, particularly the art book and soundtrack. It’s too bad the box doesn’t have a somewhat hard to locate these days Deadly Premonition coffee mug as an extra special bonus. But I’d gather that would add to the cost and there’s the issue of careless delivery persons tripping on that ONE spot on your walkway when walking up to your front door. Well, you can always make your own coffee and find out what the FK is going on when you pour a bit of milk into it.

Anyway, Deadly Premonition: The Director’s Cut – Classified Edition is available for pre-order NOW (you’ve already clicked one of those links above, Zach? I know you did!) for $49.99 and will be headed your way on November 24, 2015.

In other words, the inmates have taken over the asylum and yes, Bats needs to do some darknight detecting and with due diligence at that or he’s not getting out in one piece. This 3DS/2DS and Vita game (set to launch with the console and PC versions on October 25, 2013) brings things down to size in “2.5D” form, but manages to look pretty cool and should feel like a classic side-scroller with a nice Arkham twist. Sure, you can get cranky and say the Vita game should be closer to the PS3 version, but here’s a case where I’ll defer to the dev team over at Armature because they’ve done a really good job with the visuals on both handhelds.

Holy WOW, Batfans! I suppose a limited edition wooden shelf or build it yourself bookcase would be out of the question, huh? Actually, at $119.99 for all that stuff you’re getting, this isn’t a bad deal at all AND it’s packing more than what’s in the European version announced last week. Um, “Don’t mess with Texas? Everything’s BIGGER in…” oh, never mind. The sheer scope of all this swag automatically nets this limited edition an automatic entry into this year’s Holiday Gift Guide and given that word on the street is the gameplay’s stellar… this one’s a total no-brainer if you can only afford the standard edition.

Anyway, here are photos of the massive set (one each of the PS3 and 360 SKUs) and below the jump, a listing of what’s in the box. Add a cape and you’re practically Batman, folks!

Batman: Arkham Origins will be available for PS3, Xbox 360, Wii U, and Windows PC. Batman: Arkham Origins Blackgate, the handheld version (developed by Armature Studio), will be available for PlayStation Vita handheld and Nintendo 3DS. The game will release on all platforms worldwide on Oct. 25, 2013. I don’t think there’s a collector’s edition for the portable versions, as it sort of looks silly carrying a shelf or small bookcase with you when you’re out and about (ha ha)…

END_OF_DOCUMENT_TOKEN_TO_BE_REPLACED

Hmmm… Allow me to get into trouble (again) as I break this down for you and possibly help Sony and other game companies save some money in the future (hopefully).  While these Collector’s Editions are indeed really cool, they also present a telling case against themselves (as well as make people like me wish for the older, wiser days). For example, sure, it’s fine and dandy to get a demo of the eagerly anticipated The Last of Us as well as additional God of War content, but why not stick those onto a separate DISC and put it in the box as opposed to creating paper vouchers that end up getting tossed or lost? This way, gamers without PSN access could play the demo and access that bonus content which wouldn’t be initially available to those with the standard edition. That soundtrack CD is a good idea, but it’s too bad games aren’t using Redbook audio these days, as it would have been super to just hear the soundtrack alone by accessing it off the game disc (just like the “old days”)… END_OF_DOCUMENT_TOKEN_TO_BE_REPLACED