Well, sometimes reverent listening isn’t all it’s cracked up to be when you go home and find things not only unchanged, but unhinged. Kris Avedisian’s excellent Donald Cried is a great, gloriously uncomfortable can’t-miss classic, a bleak comedy (it’s not for the kids!) with a sentimental side that will get under your skin if you identify with any of the characters portrayed here. Even if you don’t, you’ll be laughing one moment and reflecting the next. A sort of love child of Chuck and Buck, The Odd Couple and Curb Your Enthusiasm, the film serves up a perfect trip to hell for its poor protagonist, Peter Latang (Jesse Wakeman) after he heads up to Rhode Island to take care of his late grandmother’s affairs. END_OF_DOCUMENT_TOKEN_TO_BE_REPLACED

A killer “B” in the making, House Shark caught my eye (ow!) with its intentionally cornball “Jaws in a house” plot and liberal doses of humor and primarily practical effects work. SRS Cinema and veteran indie director Ron Bonk (there needs to be a cartoon sound effect here) is looking for like-minded horror fanatics to help him fund his latest venture with a mere $15,000 target between those who donate and the completed film. There are 22 days left to get this show on the road (or back on the road), so if you’re a fan of low-budget gore and spirited film making in a jugular vein, you know where you’re clicking next.

In English: Check out the Indiegogo campaign here and take note that contributing at least $60 to funding will net you (among other rewards) House Shark on one of three formats (VHS, DVD or Blu-Ray), you’ll also get a copy of his upcoming homage to female revenge flicks of the 1970’s, She Kills (that trailer isn’t for the kiddies, folks!). You can also choose to dive into the shallow end of the pool and get less perks or belly flop into the ocean as a high roller and actually be an EXTRA or even one of the film’s producers if you’re willing to travel.

Hmmm… does anyone want to ring up a certain wealthy, wild-haired egomaniac running for office and get him off the trail for a few weeks? Sharking in a house in upstate NY just may be more up his alley than stirring up all those hornet nests all over the place. Better to have him in the real entertainment business than making a “reality” show out of more serious stuff, I say. While I didn’t to catch Richard Elfman’s bizarre Forbidden Zone in theaters during its limited release in 1980, I finally saw the film around 1985 on a loaner VHS tape and it made for quite an outrageous experience. Taken out back and shot by many critics of the time, the film has since become a cult favorite and now, thanks to MVD Entertainment Group, it’s back. This time both DVD and Blu-Ray owners will get to snap up this crazed classic in a Special Edition format complete with some new Bonus Materials:

Blu-Ray owners can also buy the film in an Ultimate Edition that adds the Danny Elfman/Mystic Knights of the Oingo Boingo soundtrack. I’m going to introduce a few people to this one and let the sparks fly. It’s certainly a film that’s both a product of its time and still packs a kick in the head or three from some of its more offbeat moments (as in the entire film). Check out the kind of NSFW trailer and expect to have your eyes pop out of your skull at some point.

But that’s just the film doing what it needs to do, folks. It worked back then and I’m betting it’ll still work today.

Just when you think the modern Hollywood horror film has been all tapped out, along comes one of those movies that keeps you guessing even if you think you know what’s coming. Director/co-writer David Rountree tosses some tasty ideas into his chunky horror stew that will keep you hooked in and guessing right up until the double (or is it triple?) back-flip ending. It’s tricky to discuss the film in detail without spoiling a few of its twists and turns, but if you’re paying attention you may see a few of the surprises coming.

That said, if you go in with expectations of yet another slasher film, it’s a good sign that the movie shoots you down a few predictable paths before whipping the red carpet from underneath you much more than you’d think. Rountree also stars in the film as Travis Simon, an employee of a film equipment rental shop who works with Lane (David Banks), an ex-con with a rather nasty disposition and a particularly unsettling hobby. When Travis decides to make a low-budget horror film with Lane’s help, let’s just say things go predictably awry and downhill fast. A little accidental death during the making of their film doesn’t deter the pair from continuing their project and in fact, spurs Lane on as he starts taking things a bit too seriously. END_OF_DOCUMENT_TOKEN_TO_BE_REPLACED 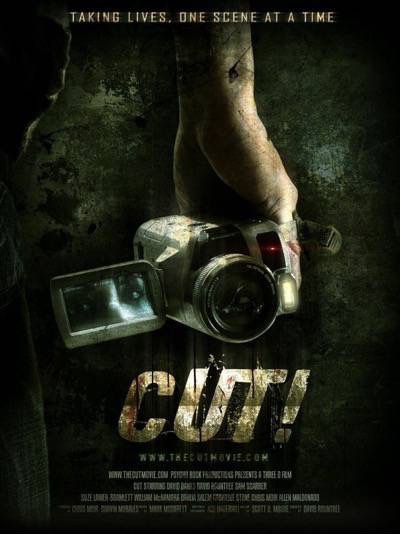 I just realized that February has a Friday the 13th rolling up, but I’m not the superstitious type these days. Real life tends to do more damage if you’re unprepared for it, so dodging black cats climbing mirrored ladders while carrying buckets of salt in their mouths doesn’t faze me one bit. That said, Psycho Rock Productions and Dog House Post’s new indie horror film, CUT!, (set for a DVD and VOD release February 24), will be getting a special week-long screening for horror fans in the Los Angeles area. From February 13 – February 19, 2015 the film will be showing at the Arena Cinema Hollywood (1625 N. Las Palmas Ave, Hollywood, CA 90028).

You’d like to see the trailer, right? Fine, then. Here you go:

“What’s it all about, Alfie?,” you ask? Well, thank you for asking and here’s a bit more to read:

In CUT!, the apparent is never the truth as an ex-con and aspirant filmmaker set out to manufacture a film by scaring people for real; however, when it goes too far and someone actually dies, the pair decide that killing for real on film is the only way to make a truly terrifying movie. 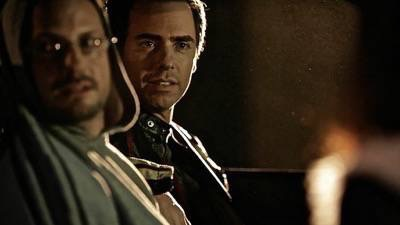 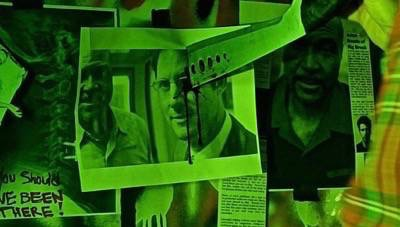 Well, my teeth are chattering already and that’s despite the heat not working here at the library today. Directed by David Rountree and starring David Banks, Dahlia Salem, Sam Scarber, Allen Maldonado and Suze Lanier-Bramlett, CUT! won Best Film, Best Director, Best Leading Actor, and the Award of Merit for Audio at the 2014 Independent Film and Television Festival and was named by Movie Rankings as one of the Top 5 Horror Movies of 2014. Hmmm. If it’s as good as all those awards make it out to be, I’m going to be typing my review from about halfway under the couch. There’s a screener on the way, so I’m keeping my fingers crossed…

Expectant mother Liz wakes to find her nearly-to-term pregnancy has disappeared overnight. When doctors can find no medical explanation for the loss, police treat Liz and her husband Rick as prime suspects in what has now become a missing child case. Only Liz’s husband and brother trust her version of events.

Well, that’s an eyeball-opening teaser and plot synopsis for the indie horror flick ABSENCE, that’s for sure. I don’t think the movie has any visible fetus removal scenes, but your attention is grabbed right away and kind of held for that fifteen seconds above. Below, may I suggest not clicking on that clip at all if you easily get carsick? I’m don’t at all but the handheld camerawork did give me a headache just watching it the first time. These found footage flicks are take it or leave it for me, but I guess this will do well enough with the horror fans who love this “reality” genre stuff. I’ll most likely catch this at 3am on cable at some point in the future when I should be sleeping or am otherwise up way too late working…

So, are you frightened yet, or did you need to down a Dramamine?