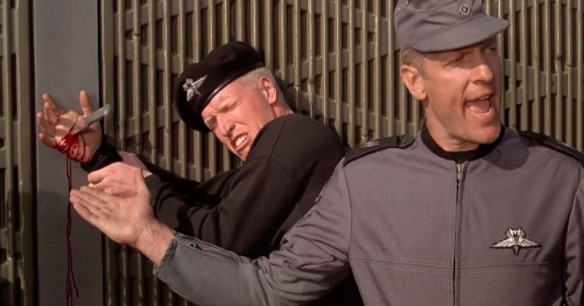 “This soldier threw a knife that from twenty feet away that somehow landed in his own hand. That’s a damn PASSING GRADE for sheer ingenuity!” 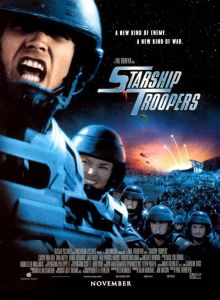 Someone call up Guinness, please, because I can very likely tell you of the world’s shortest class trip that doesn’t involve anything dangerous happening. Back in 1997, I went to see Starship Troopers on its release day, opting not to take the subway to what I thought would be a crowded city theater, but supporting a local theater here in the Bronx. I got my ticket early for the first showing at the formerly wonderful Loews American, sadly, now a Marshall’s (Boooo, but at least they kept the beautiful ’40’s era statues on the rear of the theater intact), and waited for the film to begin.

I noticed as the lights dimmed that there were two rows of seats on the right side that were empty, but there was one guy who looked like he was from the theater waiting for someone, as he kept looking back as the exit from a seat behind the empty rows. I recall shrugging, then getting glued to the screen as the film began. The theater wasn’t quite full, but those rows stood out. The movie started and during the boot camp scenes, a group of kids guided by two teachers and and an aide marched into the theater, and took their seats. Those kids were I’m guessing, based on height and dress, were about nine or ten years old.

Some kids are scarred for life and they never even saw a an alien bug rip someone in half.

As soon as the co-ed shower scene kicked in about two minutes later, yep, those kids were rather rapidly lined up and shuffled out so fast that it was like a Benny Hill sketch, Yakety Sax and all. Some in the audience let smattering applause and few quick and mean comments were tossed at the exiting teachers who thought this was a good idea before we all went back to concentrating on the screen. I shook my head because I guessed that somewhere a few weeks or months earlier, some adult in that school likely saw an ad or trailer this was coming out, decided they wanted to take those kids along because “Pew-Pew, it’s gonna be like Star Wars!”, never read any Robert Heinlein, went and got the trip approved, getting clueless parents to sign permission slips that allowed their kids entry to an R-rated film.

This trailer, by the way, is excellent… but misses a few important points (and how!):

END_OF_DOCUMENT_TOKEN_TO_BE_REPLACED 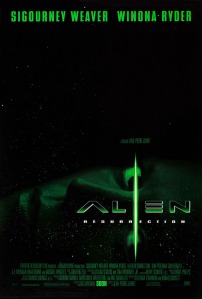 So, I think it was around spring 1997 and I’m sitting in a movie theater when “surprise!”,  that teaser trailer above for Alien Resurrection pops up like a chestburster squeezed into a jack-in-the box. I recall some people in the theater being either not too thrilled or just plain shocked that there was another film on the way. I also recall my eyeballs didn’t pop out like they did when I saw the ALIEN³ teaser trailer six years previously, but I think my new-ish eyeglasses kept them from ending up on the floor. Actually, I was more amused than shocked by what I saw (so there!).

I saw the first ALIEN back in 1979 at age 15 (in dangerous Times Square, baby!), ALIENS was a day one view when it premiered in 1986 (there’s a funny story about screening that I’ll tell one day). The third film was, I thought, going to be the last one when it landed in 1992 and yes, I bade the franchise a fond farewell thinking it had run its course. Welly-well-well, imagine my surprise when 20th Century Fox trundled out the ALIEN name for one more installment that turned out to be less scary than the others and actually somewhat more amusing while unsettling on a few fronts in terms of the visual vibe it delivered. How the heck does that work and how the heck did I find myself bopping into a theater in November 1997 with a wry grin not expecting anything other than to be somewhat giddy partly because I knew some in the audience wouldn’t appreciate this Resurrection at all?

END_OF_DOCUMENT_TOKEN_TO_BE_REPLACED 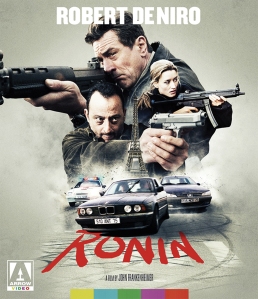 I’ve always viewed Ronin as a sped-up Alfred Hitchcock film, but yep, I’m nuttier than a fruitcake when I need to be. Late director John Frankenheimer’s mostly solid and thrilling 1997 action flick has a few Hitch hallmarks such as an obvious red herring as a major plot device, a bunch of men (and one woman) under pressure crammed into a tough situation, indiscriminate collateral damage thanks to high-speed chases and a story that has at least one major flaw one can overlook when all is said and done.

As usual, Arrow’s stellar Blu-Ray/DVD combo packs in the film and a load of bonus features worth a look. There’s also an alternate ending that is pretty darn awful, but we’ll get to that when we get to that.

END_OF_DOCUMENT_TOKEN_TO_BE_REPLACED 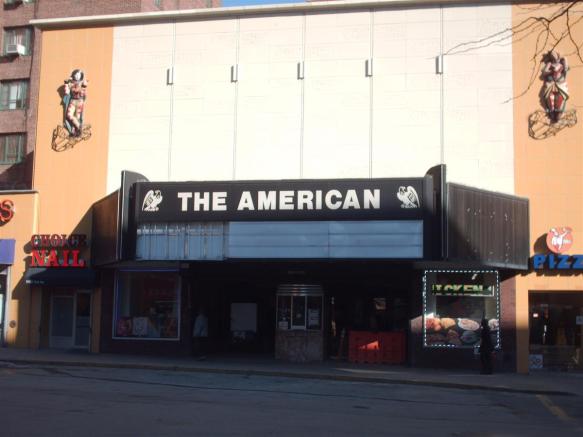 There used to be five movie theaters within walking distance of my place, six if you wanted to hoof it along a nearby highway for a spell to hit a former drive in turned multiplex. Now there are a mere two movie theaters total in the entire Bronx area, which is a shame and a sham simultaneously. When it abruptly shut down last year, The American (which was originally a Loews theater before passing in to a few hands over the years) wasn’t exactly a grand theater. Well, at least it wasn’t for the last decade or two. But it was close by, cheaper than going into Manhattan and even if the movie you saw stunk, at least the audience could be somewhat entertaining and annoying as they tend to be when all one desires is to hear what’s on screen without any peanut gallery antics. END_OF_DOCUMENT_TOKEN_TO_BE_REPLACED

Well, it WASN’T supposed to be such a damn slow day here, but between the rain keeping me inside and away from a decent wi-fi connection and some issues with a PC game I was trying to get running, it’s been kind of a “Meh” day for productivity. I did, however, discover this little clip from the old Sega Saturn and PC game Enemy Zero that sums up all of today in three seconds:

Yeah, well… I’ll get over it tomorrow. OK, enough time burning – back to the salt mines for me…