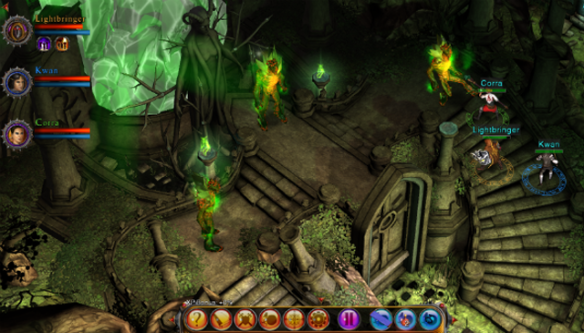 New Jersey-based N-Fusion Games’ Ember is probably the best looking and most ambitious mobile RPG to date, period. But is the phone and tablet market truly ready for what will be a visually rich and potentially battery draining game experience such as this? That’s one of the questions that went swirling through my brain as I saw the upcoming game in action at a recent 505 Games event. Sure, there are a digital ton of JRPGs, action, puzzle, card battle and other hybrid role playing games out there. But Ember’s scope is more of the Baldur’s Gate meets Ultima meets Morrowind school of storytelling and gameplay. This will be a massive, deep, and detailed world where anything and everything can change based not only on what each player does, but how the AI interacts with itself as you play…

As the company’s CEO and creative director Jeff Birns showed me around a few of the game’s eye-popping maps, I was struck speechless by just how much game there was to show off. I was sold on the game as soon as I saw it in motion, but Birns’ infectious enthusiasm for the project had me wanting to run out and grab random strangers and tell them they needed to go buy some sort of tablet to play the game on. It’s coming to PC as well (via Steam), but I’m thinking it will make more of a major splash on tablets where its graphics will hook you in before the compelling gameplay keeps you a happy and willing captive. I don’t currently own a tablet, but this is the one game that may have convinced me I need one (Er, provided the game ships on Android at some point). There’s a ten-year history to the making of Ember and it shows in the stunning amount of detail that included over and underworld maps laid atop one another. This means the cities you’ll venture into have sewer systems and homes with multiple floors. Everything streams smoothly with no loading screens when headed indoors, outdoors or into dungeons – an amazing programming job that has to be seen to be believed. The game’s speedy combat with a tactical pause system makes for some solid, familiar gaming. But Ember isn’t a simple Diablo-style hack & slash affair at all. Add in a day/night cycle, realistic weather effects and even NPC’s, enemies and wildlife that go about their business when unmolested and you get an epic worth seeking out. 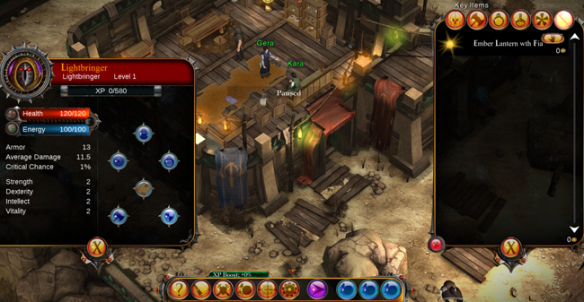 In one area, the main character entered an goblin citadel that was actually a massive library full of rotting books (as goblins don’t read much). In addition to some handy tomes to pick up and peruse, as long as the goblins weren’t attacked, they let the character be. A few of them even had non-mandatory quests for the hero to take on. How you approach and deal with NPCs and other characters plays heavily into the game. Birns noted that one could kill off the goblins if their character was powerful enough. But doing this would keep some nice rewards out of their hands as well as possibly cause trouble later on. Although we hopped around the game’s maps with an overpowered character, it was clear to see that the game is made to be challenging for everyone who plays it. In a great touch, Ember is made to appeal to casual players as well as RPG veterans thanks to intuitive menus and straightforward controls. For those players seeking more depth to the world, there’s more than enough lore here to keep you poring over all those books and notes you’ll find throughout the game. Birns and the dev team want players to be feel completely immersed in the world they’ve spent a decade or so creating and it looks as if Ember will be that engrossing and then some.

The game’s proprietary tech was completely developed in-house and it’s incredible to see it in action. At one point, Birns showed off how simple it was to create levels, placing some ground textures on a grid, dropping in plant life, rocks and a few other objects as I sat there in awe. Then he showed just how tiny that little plot of game land was compared to another area in the game and I nearly fell off what I was sitting on. I don’t think he mentioned how long EMBER would take to complete, but I’d say it’s going to be quite an epic that will have plenty of core RPG fans missing their subway and bus stops should they play this while commuting. As you can see from the company’s site, Ember will have an epic storyline and scope to match. For those of you with cramped mouse fingers, here’s a bit of what to expect in terms of features:

It certainly looks as if Ember will be drawing some major attention when it’s released later this fall. I’ll most likely try both the mobile and Steam versions just to see the differences in control, but if what I saw was any indication of the final product, this one’s going to be a winner no matter what it’s played on…

3 thoughts on “Ember: N-Fusion & 505 Games Bring a High-Quality RPG to the Mobile Masses”