While this demo of Metal Gear Solid V: The Phantom Pain is incredible, not seeing “A Hideo Kojima Production” or his name (or his studio’s name) anywhere on the demo is a bit heartbreaking. Granted, Kojima does get credit for directing and editing the also great E3 trailer (which also has him properly credited as designer at the end):

But for some gamers the upcoming PS4/Xbox One/PC release itself may as well have “Alan Smithee” in the credits at this point. If you want a real laugh, watch the trailer with YouTube’s closed caption option set to ON. The messed up English that results is pretty damn funny considering the language being captioned in such a wacky manner IS English. Anyway, the game looks great and should sell quite well. But for some fans it’ll be a bittersweet play through with its creator ousted from what could be his best work.

Konami Japan’s YouTube channel put up a few Kojima Station E3 videos during the show, but the one everyone wanted to see was of Metal Gear Solid V: The Phantom Pain in action. Let’s just say that boy, did they come through big time on that. Now you can slide that slider back and watch the entire broadcast that talks about the game and its assorted features and such, but if you’re just interested in seeing what the Fox Engine can do on the PlayStation 4, well you’re all set on that front at about 49 minutes in. The game looks fantastic, that offbeat Kojima sense of humor is in full effect (the “Phantom cigar”, cardboard box stealth and “Fulton” balloons are priceless!) and overall, this brief taste of the game shows what’s coming sometime in 2015 when the game actually hits retail and digital outlets. it may be madness, but it’s the best kind in action as far as seeing this game’s creative team outdo itself here… 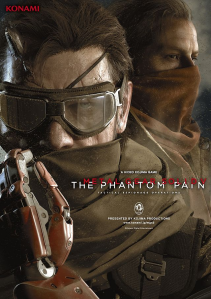 Jack Bauer as Big Boss didn’t thrill me much when I first heard the news, but Keifer Sutherland has acquitted himself quite nicely here, although I know the David Hayter fans are cringing and shaking whatever they have handy at the screen. Well, this latest Hideo Kojima and company (Kojima Productions, of course) epic looks to be the best 3D game in the franchise to date, adding a huge open world and I’d imagine the options for no two people to play the game exactly the same. as usual, Metal Gear Solid V: The Phantom Pain will be cinematic and lengthy and denser than a year old loaf of Bisquick bread, but that’s Kojima’s style in action. You may end up watching more than you play at some points, but if you’re into it, you’ll end up playing more and taking notes because of all the stuff he’s dropping on your noggin.

As noted earlier, that FOX Engine is masterful across the board, so every version of the game will look amazing. I also see that the amount of mature content, blood and gore here means this one’s not for the kiddies at all, not that there was ever a Metal Gear Solid game made for anyone under 18 if you think about it. Okay, some would argue MGS: Ghost Babel on the Game Boy Color isn’t “mature” thanks to its visuals, but I’m not here to argue (*punt!*). Anyway, The Phantom Pain is coming.

So, it’s here and even though it’s been known for a while it was going to be what amounts to nothing but a brief demo with a $30 price tag (and similar to Gran Turismo 5 Prologue in its cost versus brevity factor), some critics have been punching away hard on poor Big Boss/Solid Snake. As I’m not made of money, I’m going to wait for a used copy or trade from a friend to pop up, but I really want to play this just to see that Fox Engine in action, how Kiefer Sutherland works as the voice for Snake (taking over from David Hayter) and the ability to tackle that single (and large) map as many ways as possible. Granted, the one to two hours maximum play time I’m hearing about IS a bit pesky, but I’m gathering most reviewers played through just to complete their posts and aren’t fully appreciating that demo for all its worth. On the other hand, this is a Hideo Kojima game, so perhaps that and the Metal Gear name are carrying that price point into “Hmmmmm…” territory for some writers and players.

That said, the full game (Metal Gear Solid V: The Phantom Pain) is still underway as far as development goes, so I do hope the cost of this slice is offset in some manner, be it some exclusive content available to those with save files (on-disc and not DLC so EVERYONE who bought in can see/play it) or something else Kojima and publisher Konami can think up to keep the angrier folks down off their soapboxes. Eh, we’ll see, I suppose. I’m just glad to see a new MGS on a home console after all this time…

I actually got another mighty chuckle going when Hideo Kojima showed that trailer above at the PlayStation 4 launch in NYC last week. I’d been thinking for a few months now it would be wonderful if any developer or publisher who had a key launch or other title for the original PlayStation did something like a remake with all-new visuals, but of course, Kojima goes and has his team get retro in the weirdest manner possible. Hey, it works for me, being a fan of Metal Gear Solid and all. But I know that some younger gamers saw this trailer and nearly spit up their Red Bull because they’ve yet to experience the glory that was (and is) the original MGS. Granted, that Fox Engine is pretty mighty at doing outstandingly realistic visuals on the PS3, PC and other platforms, so there’s no doubt that Metal Gear Solid V: Ground Zeroes will do well when it lands in a few places (retail and digital) at some point OK< Spring 2014). Yeah, yeah… David HAyter has been replaced by Keifer Sutherland as the voice (and face) of Snake, but I think I'm one of the few who shed a tear and moved on quickly. I have more urgent things to think about besides who's being paid to portray an iconic character – I just want the game to be memorable and really well written.

And here’s about 13 minutes of the game with no chunky Snake to ogle. enjoy!