In a weird way, history is more or less repeating itself with the release of the brilliant remake/remix that is Radiant Historia: Perfect Chronology. The original game popped up near the end of the Nintendo DS life cycle and received pretty solid reviews overall, and this newer title slides into the eShop and at retail as Nintendo is slowly but surely planning to phase out the 3DS line (despite the handheld pretty much being the showcase for portable JRPGs in my humble opinion). Does Atlus have a hit the second time around with the same impact?  In short, yep.

If you’ve never played the first game, this one’s a must. If you’ve played the first game and are on the fence, I’d still recommend this for a few good reasons. There are new story elements, a great ‘Friendly’ difficulty setting, a new character with her own storyline (which is actually a fun excuse for assorted dungeon running exploits), full voice acting for all the main characters, sharper visuals, and all-new character portraits. The latter seems to be something a few fans dislike, but as we’re in the age of DLC, you can feel free to spend a few extra bucks for those original images and exchange the new art for the old if you like. 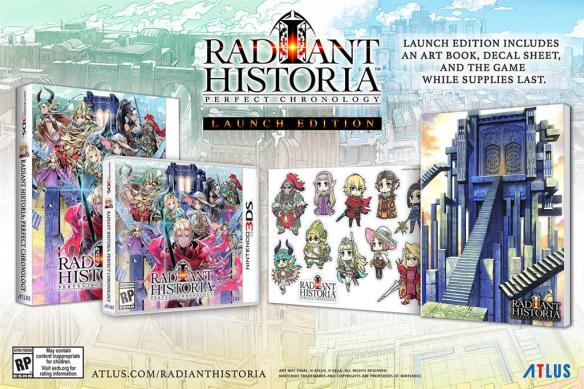 The game tells the story of Stocke, Special Intelligence agent of Alistel who, while on a mission for his country discovers a strange book called the White Chronicle that allows him to travel back and forth through time. The two timelines from the original game are all here with some expanded content and there’s that new character mentioned above called Nemesia, who unlocks even more content. The main game has Stocke and his allies trying to stop a war effort before an ultimate weapon can be unleashed, but each timeline crisscrosses the other as he jumps back and forth through history trying to change outcomes for the better. Events in one timeline affect the other, so you’ll do a lot of backtracking and file saving before you see the endings. Actually, part of the fun here is getting the assorted abrupt bad endings just so you can see the results of your choices play out before you retry a node. Often, Stocke’s best intentions lead to the worst outcomes even when you think he’s making the right decisions.

The game is fairly lengthy, but if you play on Friendly, it’s a far less battle-packed experience that focuses more on telling the story. In this mode, you can slash as onscreen enemies to take them out in one or two hits, avoiding the longer battles you’ll find in the harder modes. You still gain experience and gold, so this mode is perfect for those who don’t have a great deal of time to spend with one of these epics. Amusingly enough, you can totally whiff a swing at an enemy and yes, get into a battle with them, so it’s a good thing the combat is quite enjoyable for the most part. Battles are turn-based and allow for strategic attacks where you can knock enemies around as you attempt to dish out combos and hopefully deal damage to multiple foes with skills and magic.

After the introductory sequence, you’ll initially have three characters in your party, but Stocke will meet others in each timeline who become useful allies as the game progresses. One key to success in combat is using Mana Burst attacks to erase enemy turns or otherwise hamper them so you can get in more attacks before they get their turns. Granted, the game gets much harder on the other difficulties so the successes you have in Friendly mode will be harder fought battles when you crank the challenge up. In fact, on the hardest difficulty, you kind of need to be prepared to load up a previous save file in some cases where a boss or pack of enemies will get a few turns in before you can catch a breath.

As noted, losing some battles is mandatory because these are where the game opens up new nodes for Stocke and company to explore. Changing both the past as well as the future makes for some fun puzzle solving, especially when you occasionally get stuck and realize you need to go forward instead of back in time to reach an appropriate solution. While some characters will have icons above there heads denoting something required for a solution, on occasion you’ll run into a character who’s important to a quest but you’ll not know how until you interact with them in both timelines. I don’t think there’ve been many of these games where talking to every NPC is so important, so it’s great to see one where avoiding conversations can be a bad thing.

The overall presentation is excellent, although you’ll probably hear some whining that the game isn’t using the 3D effect or the sprites seem dated compared to recent 3DS games. *Yawn*. If this were a cart game on the SNES circa 1995 or so, it would be seen as one of the best looking of that period, I’d say. That and yes, visuals are subjective and all, but sometimes you don’t need a full-on remake with everything redone because the original got it right the first time. That said, I didn’t mind the redrawn art at all because it doesn’t affect the gameplay one bit.

As for the Nemesia content, it adds content to the main Chrono Trigger meets Groundhog Day experience the main story delivers, offering a few interesting elements and quests for Stocke to tackle. There are also tiny bits reminiscent of of Nostalgia in there, a game that seemed to come and go on the DS before it got all the recognition it deserved (as in you don’t see enough written about it today). Ha – now I;m thinking of Bill Murray doing the voice of Stocke should there be a new game or Switch port in the future. Hey, I’d toss a few bucks at that if it were a crowdfunded thing (and I’d bet you would as well). 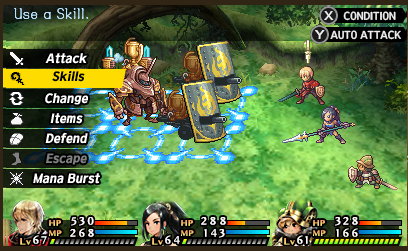 As for issues, there are a small few to deal with, but none are game-killing or worth mentioning as such. Yes, you’ll need to sit through some cut scenes or press a button to skip to points where Stocke needs to make an important decision. But these moments are here to remind you of where you may have left off a few hours (or days!) back. None of these segments are long enough to whine about and in fact, in some of these sequences you’ll get alternate scenes where you’ll probably say “Aha!” out loud a few times when a new option is revealed based on your time traveling.

Okay, if you’re really looking for a fight (with yourself, mostly) you may find some of the political elements presented here somewhat too timely and relevant. But remember, some things are indeed universal and hell, this game was originally released in 2011 with the same main story content. So don’t even attempt to lose it online complaining the story is reflecting current events here or elsewhere. Final analysis time? Sure, why not? A great story, excellently written and voiced characters and pretty solid gameplay make Radiant Historia: Perfect Chronology one of the best 3DS (or 2DS) games this year. This one’s a buy as well as an excellent JRPG you’ll want to add to your library (or backlog if you tend to stack up games into assorted ‘to-do’ piles).