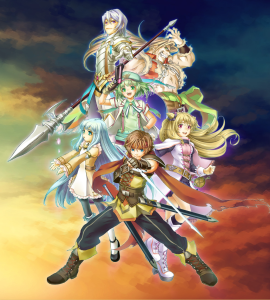 As surprising as it is that there’s been a lack of original Japanese RPGs on the Wii U, it’s an equal surprise that Alphadia Genesis manages to be a pretty solid port of a mobile game and for those who only own console, the only true JRPG currently available for the system. Released for iOS and Android earlier this year by Kemco, developer EXE-Create has cooked up a game full of familiar tropes that works hard at delivering the nostalgic goods. For the most part it succeeds, thanks to nice 2D visuals, speedy combat and a fairly lengthy quest. However, veteran JRPG fans will wish the developer had gone the extra mile in a few spots that would have made the game even more impressive…

Alphadia Year 1092: Fifteen years have passed since the end of the terrible Energi Wars, where clones were used as weapons. Two kingdoms, after nearly destroying each other and the natural resources of Energi, signed an important peace treaty, and have been co-operative neighbors ever since: Augustine and Archleign, where the story of Alphadia Genesis begins.

Join Fray, Aurra, Enah, Corone, Walter, and Grande as they work together – somewhat unwillingly – to discover the mystery behind clones who have begun murdering their masters! It hasn’t been very long since the end of the war where clones were used and nearly destroyed the planet – have the kingdoms of Archleign and Augustine not yet learned the terrible lessons of war?

The plot mixes sci-fi and fantasy elements with its cast of archetypes into an interesting mix of common fetch and slay quests and side quests with a bit of an edge in spots. There’s an overall story about clones gone haywire that brings up some interesting points (and feels inspired by parts of Blade Runner and bits of The Creation of the Humanoids) as well as a few surprises you may not see coming. The game deserves points for playing its players with an exquisite distraction that seems to point to one important NPC as a big future threat before revealing the potential danger lies elsewhere. Of course, if you pay close attention, you can see what’s going to take place with that other character a few miles away. Still, after the big reveal, the main character goes from a too nice guy with an even-handed manner to him to a cranky wreck of a leader until he gets some much needed attitude adjustment.

While your party is made up of somewhat generic characters (who do get in some fun banter during the game), the combat system lets everyone shine even if they’re out of battle. Random turn-based fights are the order of the day and you’ll do the usual trundling through dungeons to face a big boss at the end stuff. You’ll eventually get six party members, but can only have four in your party at once. Unused characters are placed in reserve, but can “shout”, giving your active members or enemies effects based on who’s in reserve. You may gain a 50% chance for more item drops, enhance certain stats, make enemies slower, gain more experience or gold and more. Mixing and matching during the game is key to success, but you need to be wary of having at least one or two pure damage dealers in the main party.

Unused party members also gain experience and level up skills, but there’s a catch. In order to use magic outside the elements each hero or heroine specializes in, rings need to be bought or found, enhanced and equipped. Each character is skilled in a single element, so you don’t need to equip a ring on them for that element. However, party members in reserve equipped with rings see no magic growth until they get in some combat time. This keeps you swapping members in if you want them all to be powerful enough to make it through the tougher portions of the game that include optional bosses and two combat arenas that feature some really powerful enemies. All that swapping also helps extend the playtime a great deal, particularly if you’re a completion freak like I am who has to see how strong every character can get.

The difference in the game’s two difficulty modes is somewhat striking, particularly when you consider its mobile origins. Easy mode allows you to find Alphadia Genesis Points (AGP) scattered throughout the map and dungeons or available as rewards from the four super-tough optional bosses you’ll eventually want to face off against. Those points can be used to buy special gear and usable items that can boost your party’s stats considerably. There are also save points located right before boss battles that also heal your party up completely. Normal mode dispenses with finding AGP (save for those aforementioned tough bosses) as well as save/heal points, making for a more challenging experience. You do get 120 AGP to spend at the beginning of the game, so choosing what you buy wisely is key. In the mobile version, you could access the cash shop and spend real dollars to purchase extra AGP to spend on special items. So, the Wii U version is effectively much harder than the mobile game.

For those of you who want to mine everything out of your games, there’s no New Game+ features here at all. However, once you defeat the final boss, you have the opportunity to face off against it again and get a few hours of additional content that leads to a multi-floored dungeon, a new final boss to take down and an updated ending. As far as length goes, I spent about 66 hours on Easy mode and the extended sequence that follows, then put in about 15 hours into Normal before stopping to write this review. I’ll get back to the game after the New Year kicks off, as I want to see if the endgame holds any surprises I may have missed out on. Given the other ports of Kemco’s mobile games have been somewhat similar in some areas, I’ll go out on a limb and say the harder mode’s endings won’t cough up anything all that special other than a congratulatory screen. Kemco and its dev teams crank these games out for mobile users to buy, play and move on to the next one after a point, so I can’t see the company forcing much newness on Wii U owners.

Visually, the game’s high-definition 2D sprite art looks nice and nostalgic overall, but the polygon-packed battle scenes are a bit stiff with the occasional camera angle change to spice things up. Those angles aren’t as overly dynamic as Wild Arms was back on the PlayStation with that uncontrollable “cinematic” camera zooming where it wanted to. You’ll also notice that there aren’t a wide range of enemy types here. You do see a bunch of palette swapped monsters in new areas and yes, those gigantic red versions of enemies that are all incredibly strong often offer up some painful battles when encountered. Of course, if you play enough of these games, you’ll be used to everything mentioned above and then some.

As for actual quirks, while exploring areas, there’s a zoom in/zoom out feature that’s severely underused as you can’t move while zoomed in either direction. You really only need to zoom in to locate AGP, which is faintly highlighted until you get a closer look. As for zooming out, if there’s a major gripe with it, it’s that there’s no dungeon mapping system in play. Some of the places you venture into past the halfway point get pretty complex to the point that even zooming out doesn’t help much because again, you can’t move at all. That said, if you’ve a decent sense of direction, you’re not going to really get lost. But having a map to refer to would have been a nice addition. Nevertheless, these are small complaints at the end of the day as the game is quite enjoyable to play once it has its hooks in you.

I suppose I could whine about the complete loss of touch screen support for the GamePad, but it’s really not missed. The game works exactly the same whether you play on your TV or the smaller screen, but I’d gather there will be a small group of users who want the ability to swipe and tap away. Having the option to do so is a cool thing, but I’d bet a penny that Kemco and Natsume weighed the options carefully before making the decision to lose the touch screen functions. You can still see where you would normally tap or slide the screen as you play. But instead of that finger action, you’ll be using the shoulder triggers, D-pad or left analog stick. Call it “streamlining for the core audience” and not a “wasted opportunity” and it’s all good. 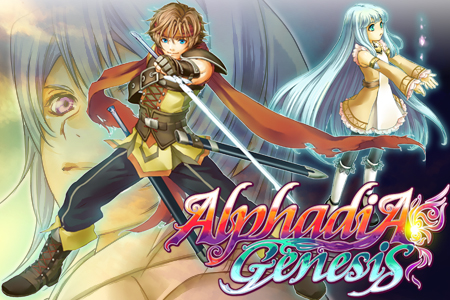 The music is well done, but expect a lot of repetition of those nicely done tunes as the game progresses. Voice acting is entirely in Japanese and suitably vigorous throughout, meaning you’ll love it if you’re a JRPG traditionalist or hate it if you think full English translations work better. The localization job is quite good with only some minor typos rearing their heads (I counted three in the entire game). For my money, the game succeeds excellently at capturing that mid-90’s phase where JRPG’s were moving from 2D to 3D platforms and you got games that weren’t perfect, but bridging that gap as best they could. While I’m not sure about plans for the future, Kemco and EXE-Create have produced a few other Alphadia games for mobile that might make a bit of a splash here if they were ported to the Wii U (or 3DS, as the other games seem to be completely sprite-based affairs). That $14.99 you’ll spend on Alphadia Genesis will be well invested, particularly if you appreciate this style of game and own a Wii U. It’s not a Game of the Year contender at all, but it does fill a void on a console that should have more of these games on it by now.