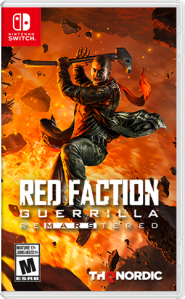 If you’re a Nintendo-only fan who missed out on Red Faction Guerilla in one of its previous competing console or PC incarnations, it’s finally arrived on the Switch in pretty solid form as Red Faction Guerilla Re-Mars-tered ($29.99)  If you’re also a huge fan of open world games packed with plenty of content and a ridiculous amount of destruction, you’ll be very pleased with this one despite a few technical hiccups.

Developer KAIKO has ported original developer Volition’s 2009 classic to Nintendo’s hybrid system with all the DLC and game modes intact and while things can get a wee bit iffy when the frame rate gets bumpy in the busiest moments, it’s an amazing port for what’s working perfectly right out of the gate. For starters, the game looks great despite the seemingly limited color palette. Characters are smoothly animated, there are some great visual flourishes and hell, even the rolling skies will make you stop and stare once in a while (well, provided you’re in a safe zone).  Hopping into your vehicle of choice or hoofing it to a destination whereupon you unleash all sorts of ordinance as you attempt to survive whatever the EDF troops throw back is just pure fun on a stick with the results being lots of leveled structures and a bunch less pesky pissed-off troops to deal with. The AI certainly puts up a decent fight, calling in support that can and will escalate things in a tearing hurry.

The destruction, thanks to the Geo-Mod 2.0 engine, looks and feels darn near perfect as those assorted enemy bases and other structures crumble and tumble with a particular sense of weight that can be hazardous to your character’s health if he or she is too close to something exploding or collapsing. While both the Campaign and DLC content have stories to follow, you’re pretty much going to be rolling out with intent on doing as much damage to enemies and enemy buildings as you can while trying not to get space-dusted yourself. Even on the easiest difficulty it’s all too common here to barely survive some of the tougher missions. But persistence and perhaps a better loadout pay off big. As you get better at fending off the enemies, when you do buy the space farm, it’s likely going to be from going in too hot and not being prepared for EDF retaliation. Or: you may want to have an escape route planned or at least enough explosives to blast your way out of trouble when necessary.

END_OF_DOCUMENT_TOKEN_TO_BE_REPLACED

While much of its color palette is about as utilitarian as the sledgehammer lead character Alec Mason swings around, Red Faction Guerrilla Re-Mars-tered ($29.99) still delivers the goods (and how!) when it comes to its core gameplay. Mars may be the big hot spot some look to as our future home (ha!), but in this game, it’s one of the worst places off earth. The game itself is quite solid overall thanks to recent patching that fixed a few flaws, but getting the hang of weapon switching in the heat of battle is still some tricky business.

Developer KAIKO took Volition’s 2009 PS3/Xbox 360/PC game and added some nice modern visual flourishes such as revamped textures, lighting, and shadow effects along with a (mostly) smoother 60fps frame rate. The game also packs in all the DLC, including a side story set years before the main game featuring a badass heroine who uses some cool alien weaponry, so this package is going to be a treat for those who want additional solo and online play modes to pad out an already lengthy game experience.

Annnnd just when you make that last payment on your ride, here comes Mason to check up on that repair or replacement clause.

END_OF_DOCUMENT_TOKEN_TO_BE_REPLACED

There are two important things to realize straightaway about King Art Games’ Black Mirror. First of all, nope – it’s NOT related to the popular streamed show at all. This is a remake of a PC game that was initially released in 2003 that later got two sequels, all before that Netflix show was a whisper in someone’s mind. The second thing is, those who’ve played the original will likely appreciate this game a good deal more than those going in cold (or thinking of that show) because even with two patches, it’s got a few issues that still render the experience somewhat imperfect. We’ll get to those below, but let’s take a trip in time to a gloomy Scottish castle and its gloomier inhabitants circa 1926.

David Gordon rolls into the moors armed with a cryptic letter and plenty of questions upon learning his father has died rather horribly somewhere in the vicinity. The game actually opens with the events that lead to the fiery demise which seems to be suicidal yet somewhat supernatural. David soon finds that although he’s heir to the castle, there may be some who don’t want him around or perhaps want him to stay, but more or less permanently no longer among the living. Cue up the spooky music and sense of impending dread, ladies and germs. The end results are a pretty decent take on the horror/adventure game with a few modern touches, not all of which work as well as they need to.