If you’re a Nintendo-only fan who missed out on Red Faction Guerilla in one of its previous competing console or PC incarnations, it’s finally arrived on the Switch in pretty solid form as Red Faction Guerilla Re-Mars-tered ($29.99)  If you’re also a huge fan of open world games packed with plenty of content and a ridiculous amount of destruction, you’ll be very pleased with this one despite a few technical hiccups.

Developer KAIKO has ported original developer Volition’s 2009 classic to Nintendo’s hybrid system with all the DLC and game modes intact and while things can get a wee bit iffy when the frame rate gets bumpy in the busiest moments, it’s an amazing port for what’s working perfectly right out of the gate. For starters, the game looks great despite the seemingly limited color palette. Characters are smoothly animated, there are some great visual flourishes and hell, even the rolling skies will make you stop and stare once in a while (well, provided you’re in a safe zone).  Hopping into your vehicle of choice or hoofing it to a destination whereupon you unleash all sorts of ordinance as you attempt to survive whatever the EDF troops throw back is just pure fun on a stick with the results being lots of leveled structures and a bunch less pesky pissed-off troops to deal with. The AI certainly puts up a decent fight, calling in support that can and will escalate things in a tearing hurry. 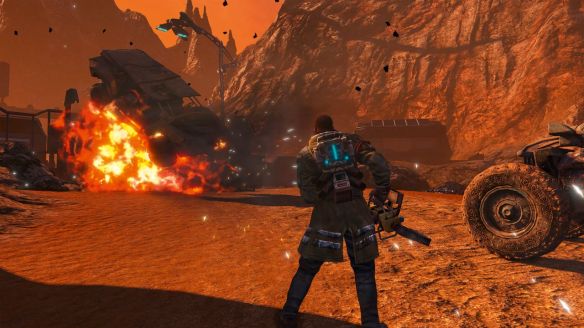 The destruction, thanks to the Geo-Mod 2.0 engine, looks and feels darn near perfect as those assorted enemy bases and other structures crumble and tumble with a particular sense of weight that can be hazardous to your character’s health if he or she is too close to something exploding or collapsing. While both the Campaign and DLC content have stories to follow, you’re pretty much going to be rolling out with intent on doing as much damage to enemies and enemy buildings as you can while trying not to get space-dusted yourself. Even on the easiest difficulty it’s all too common here to barely survive some of the tougher missions. But persistence and perhaps a better loadout pay off big. As you get better at fending off the enemies, when you do buy the space farm, it’s likely going to be from going in too hot and not being prepared for EDF retaliation. Or: you may want to have an escape route planned or at least enough explosives to blast your way out of trouble when necessary.

In terms of performance, there are two graphics options to choose from. Quality mode works best in handheld mode which locks the game into a respectable 30 frames per second for most of the experience. Performance mode unlocks the frame rate, which is a blessing and a curse in docked or portable modes, but I’m glad it was included because I hope this means the dev team can tweak it a bit in a future patch. In docked mode, Performance is the best way to play, as you get overall higher (but variable) frame rates. That said, on a large TV the game can look a little washed out compared to the PS4 version. Again, if you’re new to the game, you probably won’t care one bit thanks to it being so dang consistently entertaining and packed with so much to do.

Speaking of entertaining, I found the DLC content, Demons of the Badlands a bit more enjoyable than the campaign thanks to the lead, Samanya being more of a bad-ass than the Campaign’s lead, Alec Mason. Or, maybe I just like strong female characters in my games?  Anyway, let her idle for a bit and she’ll give you a side-eye that practically says “Hey, pal – let’s get MOVING!”  As with the PS4 version, the Switch version has the option to use motion controls for aiming, which elevates it somewhat significantly if you’re a fan of more precision aiming. The best thing about this is you can pause and switch between normal and gyroscopic control modes to see which one works best, as I’m sure some gamers will want to play “normally” without any fancy camera tilting stuff.

“Well, there goes the neighborhood… AGAIN.”

Online and offline multiplayer is present and runs well and while I’m not at all a competitive gamer, it’s fun times if you’re even just into Spectator mode, which allows you to watch matches at your leisure as long as there are people playing online. If you just want to blow the crap out of stuff alone or with a few friends passing around a controller, Wrecking Crew mode is here with plenty of maps and game variants to play with or without time limits. You and a few friends take turns and try to beat the highest score while using set or randomly generated weapons and packs or  a vehicle to destroy as much of a map’s buildings as possible.It’s even more basic than the main game’s tasks, but it’s the perfect sort of diversion as the buildings cone down and that score goes up.

Final analysis time? Sure, why not. If you haven’t played this game before and own a Switch, it’s a must buy for all that explosive content included on the game card or digital download. If you’ve played it on other platforms, just so happen to own a Switch and are Mars-curious, it’s also worth a look because it just works so well as a more than decent port that has a few setbacks that don’t at all keep it from being a total blast to play. In other words, once again (or for the first time), it’s time to… oh, I’ll let Arnold handle this one, folks: