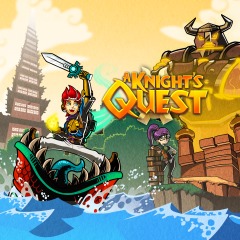 While it treads familiar ground, it does so with enough winking and nodding to classic action platform and open world games to be quite smile-worthy. Developer Sky9 and Curve Digital present A Knight’s Quest ($24.99) a fun and mostly very pretty looking homage to some greats, Fun as it is, it could use a patch to fix a few issues. That said, it’s quite exciting to see a game reach for the stars like this, but it’s also painful to see a few stumbles that keep it from 100% potential greatness. As noted above, a few fixes will make it the stellar experience it needs to be. Still, Curve Digital has a little sleeper on its hands that old-school platformer fans will find a lot to love.

As Rusty, a hero who’s a bit on the clumsy side, you start out the game finding a wooden sword and shield in a cave you’re exploring before all hell breaks loose a few minutes into things. This sequence shows off some thrilling platforming and a bit of combat as the cave is escaped, and high marks here for a nifty start to things. Plot-wise, it’s a “find the legendary heroes, gain elemental magic from each one than will help you in each area” thing you’d expect, but with a dose of lighthearted humor and Rusty riffing on what he can. The weird mix of styles to the game world (which mixes a sort of medieval fantasy setting with stuff like radios and chain link fences in areas that can’t be accessed right away) seems a bit odd, but it’s worth saying it works after seen enough times while exploring. 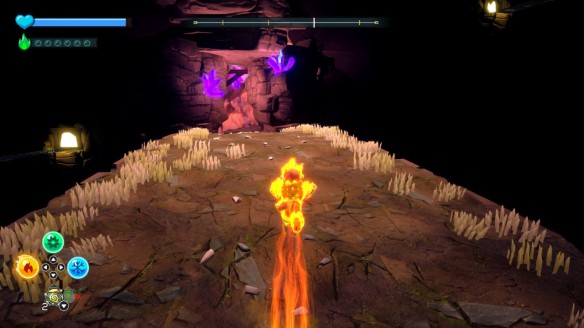 Additionally, if you like collecting stuff, the game goes out of it’s way to get you to search for secrets in hidden places or heck, almost anywhere you happen to be. From hidden treasure caches to singing slugs to breakables of a few types, it offers quite a few secrets to discover. It all feels like a throwback to another time or a game that means to keep you as busy as possible for as long as you’re playing. An amusing thing here is the game references Sky9’s Flash adventure/RPG from a while back, so some jokes will go right over a few heads unless that game was played. I didn’t see a hidden version of that game here, but I wasn’t looking everywhere thanks to blazing through some later maps to get this post up. It’s too bad Sony considers the Vita a lost cause, as the game looks like it would be a fine diversion on the portable or even better, a bonus for console owners.

END_OF_DOCUMENT_TOKEN_TO_BE_REPLACED

From Canadian developer Sky9 Games and publisher Curve Digital comes A Knight’s Quest which definitely wears its 1990’s platform/RPG influences somewhat proudly on its sleeves for all to see.  It’s coming soon to Epic Games store, Nintendo Switch, PlayStation 4, and has already arrived for Xbox One. Fun fact: the game seems derived and definitely different from the quest-filled 2D adventure game by the developer from a few years back.

Check out the PS4 trailer below and get set for its October 10th release on the platforms that don’t yet have it:

I just got a PS4 review code yesterday and an pretty pleased to report that so far, it’s quite good stuff. Familiar intentionally to some classics you may recall, but absolutely very fun stuff, indeed. You’ll have to wait a touch for the full review, but I’m really having a blast with this one. Who’d have thought a clumsy main character would be so fun to play as?