“Why so seriously delayed (again!)?” Actually, at this point the game looks so phenomenal that it’ll get snapped up even if it slips into the holiday season. I’m gathering this latest wait is due to the developer making sure the game will run as smoothly as possible out of the gate without the dreaded day one patching issues many games slap players in the face with. I’m wondering just how much better things would be if this was a completely single-player game with no online play, but such is the modern videogame development cycle that allows for DLC, season passes and other stuff that needs to work right out of the box or it’s unhappy campers complaining all over the internet. Well okay, it’s not THAT much longer a wait, but I can see a few Bat-fans leaping around and huffing and puffing in their hockey pads.

With Rocksteady knocking things out of the park with their best work to date and Scarecrow doing his best to make Batman’s life a living hell by gathering up the worst of his Rogue’s Gallery, Batman: Arkham Knight is clearly going for instant classic status. All that in-game engine visual bliss on display means the game will look phenomenal on anything it runs on and that new Batmobile just makes me wish it were a real ride. Well, just so I could say I saw it blaze by while I was out strolling about to the store. Hey, you put me in a cape and black costume and I’m going to go home and straight to bed. Sleepman to the rescue! See you in your dreams, ladies and gents! Yeah, that’s about all the heroics I’ve got.

Anyway, Batman: Arkham Knight hits retail and digital shops for PS4, Xbox One and PC on June 2, 2015. That’s not to far away at all, really. Just one big super-nap for Sleepman! I’ll see you in a few months, folks. It’s Rip Van Winkle time, Zzzzzzzzzaaaawwwww! *snnxxxx* Zzzzzz!

In this second of three parts, Batman more or less says “tanks for the memories!” as he and the new Batmobile blow a bunch of enemy vehicles into scrap metal and we get left hanging at the end. Well, at least he doesn’t say “Batteries to power! Turbines to speed!” when he kicks that tricked out weapon he’s driving into gear. Granted, this teaser is half as long as the first one, so yes indeed, it’s a cheap trick on WB Games’ part. Still, I do love those independently operating wheels on that new Batmobile. It sure must be really easy to park that thing, although I’d bet Batman would just drive over some empty parked cars in an emergency and maybe have Bruce Wayne pay a few bills after the fact. Then again, why bother doing that if all it will do is confuse some poor Gothamite who suddenly gets a small windfall from a multimillionaire not connected to their ride’s demise. Allegedly.

Batman: Arkham Night is coming in 2015 (June 2, 2015 to be exact) for PC, PS4 and Xbox One. WB Games and Rocksteady will drop the third trailer on December 6, 2014. I’d imagine it’ll be an explosive finale with a “to be continued” tacked onto the last bit.

Well, well well. If developer Rocksteady made last generation consoles sing with their technical prowess, as you can see here, with Batman: Arkham Knight they’re making the new systems a whole symphony orchestra blasting out perfect overtures. This blend of stunning in-engine gameplay and cinematic sequences almost gives the upcoming game the look of a feature film, but it’ll be the next revel that’s the bigger one. On December 1, 2014 at 9am Pacific Time on the game’s official site (that’s noon here in the eastern US), more will be revealed in an attempt to break the internet (without anyone dropping their clothes, of course).

Given that the game’s latest delay has it now shipping out on June 2, 2015, it’s a more than sure bet that each new trailer or set of screens will get pored over and dissected a ton of times on the internet and in conversation. Hey, if the game is as good as it looks, it looks like Rocksteady will still be the Batman developer for the ages to many fans. Now, if only Harley Quinn were available to play on the disc or download and not as a DLC bonus, things would be perfect. Ah well, that’s the digital life for you these days, I suppose…

Yeah, I’m sure fans all around the internet are raaaaaging about having to wait even longer to get this game, but I say let them. I don’t mind at all that developer Rocksteady needs more time to make this one the best Batman game it can be and yep, I’m sure while WBIE would love to see this one ship earlier just for the financials and such, it’s clear that the game needs to cook longer. GOOD, I say. I hate this age of massive day one patches, games that don’t run properly out of the box or worse, games that DO run, but end up not pleasing reviewers who sink it with low scores before it can get a patch. I’m thinking both developer and publisher want NONE of that noise, so the delay is on and I coudn’t be happier. Well, I could be happier if I could actually see this in person and play it at some media event here in NYC before it ships out next year, but that’s up to WBIE’s PR team, I suppose. 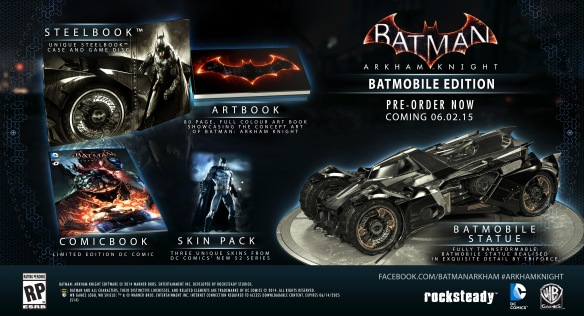 Oh, if you’re drooling at those collector’s editions, let me let you in on what’s in the box in case your fingers are trembling too much to click on either image and see them full size (they’re MASSIVE):

Hmmmm.. it would seem North America doesn’t get a PC edition with all that swag, but these games sell better on home systems anyway. Granted, those running beefy rigs will be griping a lot about this, but most people who don’t have a computer that costs as much as a decent car part won’t care because they’ll be playing this on their PS4 or Xbox One with hopefully no trouble. Anyway, with this game now nine months away, you can concentrate of completing some of the other blockbusters rolling out from this year to next June, right? RIGHT. Now stop jamming out your whining on some message board and get back to doing something more interesting with your time, I say…

Aha… and I kind of need to find my eyeballs because they’ve popped out and rolled under a table here. With Batman Arkham Knight, WBIE and developer Rocksteady are giving you another reason to buy a new console if you haven’t already. And of course,I thought this was going to be an online mode, but nope, it seems to be part of the main game and man, that new Batmobile is pretty darn slick stuff. Rocksteady’s skills with next-gen hardware are mighty impressive, huh? Anyway, WB Games wants you to check out the Batmobile in detail, so put on your drool cup, boogie that mouse finger on over HERE and enjoy the ride. I can’t even drive in real life and I want one of these!

If you thought you were going to get your hands on Batman Arkham Knight in 2014, well… unless you’re attending E3, a post E3 media event or the game pops up at some fan packed convention, that’s a NOPE, there folks. The game has been pushed into 2015 most likely so developer Rocksteady can get it running as perfectly as possible without the need for (too) many post-launch patches. I’d imagine this Battle Mode may be multiplayer, so that’s always something that needs to be as perfect as possible in terms of zero lag and everything working as it needs to. Me, I only care about the story mode, so anything resembling online play (if that’s what this is) interest me not a whit. Anyway, we’ll see what’s what during E3 week…

Back with more in a bit…

Rocksteady is back as the developer in this upcoming hit and as you can see, their incredible work on this PC, PlayStation 4 and Xbox One only game will be well worth the wait and indeed might be a big system seller when the game ships out later this year. Sure, this looks like a movie trailer, but that’s all in game engine running and making your jaw land on your shoes or thereabouts. Yeah, it’s going to be a blockbuster you don’t want to miss if you loved the other Arkham games and double yeah, WB Games is going to be cackling like the Joker all the way to the bank when all is said and done. I can’t wait to get my paws on this one. It’s going to be the Year of the Bat for gamers, that’s for sure…

Yeah, yeah… it’s JUST a CG trailer and not gameplay, but this year’s E3 will probably feature a bigger reveal of that which everyone wants to see. Only two things bugged me about this otherwise drool-worthy teaser. One: A voice mail message from Thomas Wayne? Hmmm… TOO convenient and somewhat corny in a way, but I’ll forgive the team if they twist that up into a villain being behind that ruse or something like that. Two: Catwoman. Where is she? I think she NEEDS her own game to play around in just to wash the residue of that gawdawful Halle Berry flick and even worse video game from about a decade ago or so. I still cringe when I think of how lousy both were (sorry, Halle!).

Anyway, I do hope we see Cats in her own game at some point, as she could be a more empowering character (and not a cara-cat-ure, ha!) than even Lara Croft is if done right. Other than that, a Batmobile we can drive in this one is fantastic and makes me thing Knight will have a more GTA-like open map to get around in, something the series has been needing since Arkham City. Given that Lego Batman 2 did the open world thing quite well (albeit in a campier manner), Rocksteady is on the right track with what’s looking like a game with even more replay value. Back with more on this biggie soon…