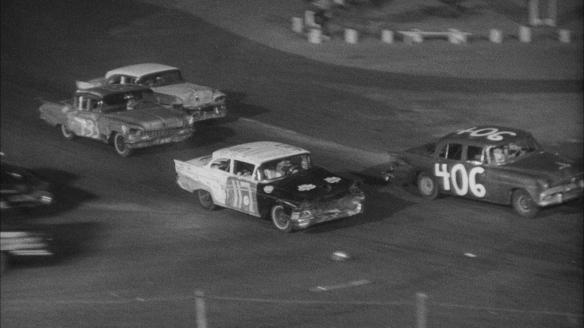 Busted-up junker cars slamming into each other on a crazy figure eight racetrack may seem like a one-note film idea with limited appeal. But Jack Hill’s 1969 “B” movie Pit Stop makes for quite a spectacular ride for more than the crash-crazed car fiends out there. For a low-budget black and white quickie shot in the late 60’s, Hill gets some major mileage from from his cast that includes Richard (Dick) Davalos, Sid Haig, Brian Donlevy, Beverly Washburn and Ellen Burstyn.

Once again, Arrow Video brings an excellent director supervised and approved HD remaster to the table packed with bonus features that make this one a fantastic addition to any film collection. For all the high-speed action and off-track thrills, there’s a nifty little tale of a man who manages to win it all yet lose everything important by the end.

END_OF_DOCUMENT_TOKEN_TO_BE_REPLACED 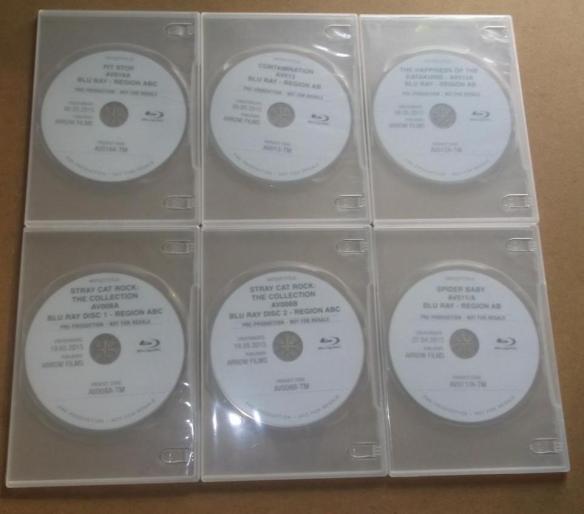 Well, now. Here’s how to make an icky Monday a far better one without doing much at all. My mailbox was stuffed with some nice upcoming release screeners from Arrow Video and MVD so I’ll be socked away checking out some stuff I’ve not seen before as well as revisiting some old friends. Spider Baby actually came earlier than the others, but it’s here just to even out the photo. Anyway, back to the screening room for me. So much for being anything resembling “productive” today.

Amusingly enough, Arrow and MVD have more than three new releases for June through August, but I’ll get the rest in a separate post as today is a bit haywire. Pit Stop, La Grande Bouffe, and Blood Rage all come to Blu-Ray in outstanding newly restored prints all ready for your viewing and collecting purposes. I’m actually thrilled about seeing Pit Stop make it to Blu-Ray as it’s a film I’d only seen once before on a beat up VHS copy of questionable quality. I haven’t seen La Grande Bouffe in years and I don’t think I recall Blood Rage unless I saw it under one of its other titles back in the 80’s. Well, catching up with these old film friends will be fun for sure.

Back in a bit.