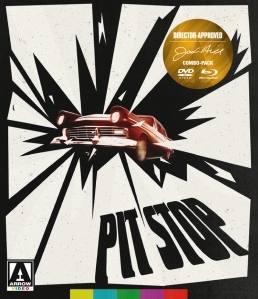 Busted-up junker cars slamming into each other on a crazy figure eight racetrack may seem like a one-note film idea with limited appeal. But Jack Hill’s 1969 “B” movie Pit Stop makes for quite a spectacular ride for more than the crash-crazed car fiends out there. For a low-budget black and white quickie shot in the late 60’s, Hill gets some major mileage from from his cast that includes Richard (Dick) Davalos, Sid Haig, Brian Donlevy, Beverly Washburn and Ellen Burstyn.

Once again, Arrow Video brings an excellent director supervised and approved HD remaster to the table packed with bonus features that make this one a fantastic addition to any film collection. For all the high-speed action and off-track thrills, there’s a nifty little tale of a man who manages to win it all yet lose everything important by the end.

Davalos is Rick Bowman, a rather self-absorbed jerk and street racer who ends up in jail after an accident during a night drag race. Bailed out by Grant Willard (Donlevy), a race promoter looking for up-and-coming drivers, Rick ends up at that aforementioned figure eight track after he’s offered a job behind the wheel. Rick initially calls the dangerous nighttime driving down below too crazy for even his style. But after he sees talented braggart Hawk Sidney (Haig) pull off a win, he decides to dive into the job both feet first. Bowman finds the even more reckless Hawk to be a more than formidable opponent, but manages to hook up with with his rather free-spirited “girlfriend” Jolene (Washburn).

Although the Bowman/Hawk conflict is a big part of the film, Pit Stop is a bigger film off the track as well as on thanks to Hill’s focus on this slice of racing culture and some of the real people in and behind the scenes. You get those amazing, dynamic actual race footage clips with plenty of actual wrecks and thrills (and yes, actors playing racers in rear-projection shots). At the time this was made, Sid Haig couldn’t drive in real life, but he certainly makes the most of his in-car and track side antics. Hawk steals every scene he’s in while Davalos downplays Bowman as a man who wants to win everything in a completely different manner than Hawk does. Where Hawk is a free and easygoing madman, scooping up trophies and trophy girls like candy, Bowman is a more low key menace who needs a few lessons in people skills.

In between races, there’s a great cameo by legendary custom car king George Barris and we see a few of his amazing rides in assorted states of completion. I’m gathering the fancy ride Grant Willard shows up in at the film’s start was a Barris job. The custom front and rear end and unique paint job certainly weren’t stock for that period, that’s for sure. The film also has a great sequence where dune buggies of a wide variety go bounding and bouncing around the desert. You even get to see a custom dragster blast down a sand strip and enough unsafe for modern times antics that make you realize people were much more fearless (or just plain nuts) back then when it came to certain automotive hobbies.

By the film’s close, the Bowman/Hawk rivalry gets a monkey wrench tossed into its works, Rick has a fling with another driver’s mechanic wife (Burstyn), there’s another big race and a fatal wreck that changes up the film’s dynamic considerably. Given that the original title of this was The Winner, you’ll see exactly what that more ironic title means to all involved. Jack Hill notes during his interview in the “Crash and Burn!” making of featurette that producer Roger Corman wanted to end things a lot differently, but let Hill have his freedom and liked the results.

In addition to the Hill interview, there’s commentary with Calum Waddel which adds a bit more to the viewing experience. You’ll want to watch the movie first to take it all in and then take a second look with the commentary, perhaps after viewing “Crash and Burn”. One key thing Hill notes is why the film was shot in black and white instead of color, but I’ll let you discover that reason for yourself. Roger Corman also gets a few words in about the film although he doesn’t mention its low key, legendary status. There’s a great interview with Sid Haig where he discusses making the film and how he played Hawk as a sympathetic character and made it work despite the man’s offbeat style. There’s a brief bit on the restoration that shows some nice before and after scenes that cleaned up quite nicely. There’s an unrestored trailer to wrap up the video presentation, but it would be cool for some enterprising studio to fund a bunch of trailer remasters one of these days.

There was no booklet or reversible cover sleeve with my review Blu-Ray, so I can’t comment on them, sorry. Nevertheless, Pit Stop is another must-buy release from Arrow that’s going to surprise you if you’re expecting only a formulaic plot and half-baked racing scenes. You’re getting one of the best racing movies of the era that needs to be a lot more appreciated these days. 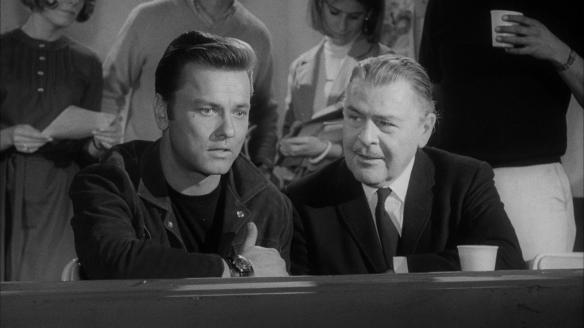 “Wait, did I leave the stove on this morning?”