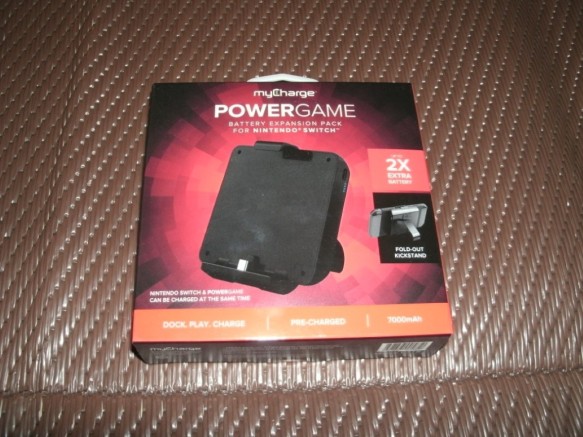 Yep. it does exactly what it needs to do and does a really excellent job in the process.

As a recent Switch owner, a few things bug me about the system, one of them being the battery life is somewhat anemic if one tends to play for extended periods of time in undocked mode. I had been poking around looking for affordable solutions and based on some review scanning, there were a few interesting candidates but almost all had some flaws from dangling wires to not enough power for my tastes. Granted, my Switch has generally stayed docked or has only traveled to a few rooms inside the apartment. However, some recent invites from friends to pop by with my Switch to either see it in action or just to play with fellow Switch owners had my eye peeled for something that I could also show off as a solid charger that wouldn’t break the bank and be worthy of a hearty recommend. Well, “Say hello to my little friend (BOOM!)”

Out of the box and ready for some mating.

The MyCharge PowerGame ($49.99) is an absolute must for Switch owners who want a decent price point, portability and most of all, a battery pack that’s packing plenty of power where it counts. Simple to set up and sporting its own kickstand, it’s an accessory that has pretty much no caveats.The 7000mAh battery inside that PowerGame comes holding a charge, so once attached (which took all of ten seconds, but parents will want to show younger kids or attach the battery for them), you’re ready to play. That said, I plugged the included USB-C charger cable unto the nearest USB out (your Switch dock will work nicely) just to top it up for some heavy testing. I really liked the kickstand on the unit because it’s placed in a better spot than the one on the Switch. The only minor (very minor) issue is if you need to add, remove or swap out the micro SD card, you’ll need to remove the PowerGame or do that card change thing before it’s attached.