Sneaking onto PC last month and out now on PS4, ECHO is one of the smartest games I’ve played this year. Developer Ultra Ultra has created an intentionally initially slow-burning hard sci-fi game that relies heavily on its innovative gameplay that’s bound to keep you on your toes. It’s also got spectacular visuals, brilliant sound design and a pair of excellent voice actors (Rose Leslie and Nick Boulton) bringing their characters to life in what’s basically one character talking to an AI interface as she tries to survive a gilded palace filled with replicas of herself trying to kill her. While it’s got its share of (primarily technical) flaws, it’s a worthy experience that shouldn’t be missed if you like your games to shake you up a bit early and often.

After a century in space asleep, a woman named En is awakened by her computer, London and informed that their ship has reached its destination. The pair has traveled all the way to a strange planet because En wants to bring back to life a friend whose remains are inside a cube-shaped device she wears on her back. The opening is a deliberately paced buildup as En lands on the planet and makes her way into The Palace, an endless ornately designed structure that’s the size of the entire planet. There’s a great deal of exposition during the game with much of of it establishing a backstory for En’s long journey as she explores her initially unlit surroundings. When she locates a spot to place that cube, The Palace reacts by coming to life and over time, producing many copies of En that eventually end up coming after her with murderous intent.

While not a horror game per se, the game has a way of getting frightening elements in as soon as En enters The Palace’s darkened state with only her suit’s lights to guide her. As she activates certain doors and shortly afterward, uses that cube, the lights go on and off a few times, flowers appear in vases and icky black gunk starts to form over time into those killer clones. They’re slow and clumsy at first, easily pushed out of the way and too slow to do more than stumble and lurch at En if they get too close. Then as the blackouts continue, The Palace records En’s actions and those Ens get smarter based on how you play each segment of the game before the lights go out again.

This forces your hand in a few ways because deliberately playing badly will get En killed relatively quickly, while being too damn good at dispatching her duplicates means when the next blackout ends, those Ens will be equally clever and even more deadly. This game is really good at showing you the error of both ways. The AI is pretty amazing when it gets to mimicking En’s moves, scanning for your position, running and sliding over some tables and yep, shooting at you or sneaking up on you from a few angles. One key is to be a sort of Goldilocks VS Way Too Many Bears as you find a “just right”balance of play that keeps your En alive while the clones do their best to keep up.

En’s not a bad-ass war beast at all, but she can hold her own if she has enough room to move and time to jet past or dispatch En-e-one who’s in her way. The game isn’t all kill, baby, kill, though. There are interesting moments where En gets to plink away on a piano or have a snack and yes, her En-emies can do the same if you’re clever enough to get in some downtime and The Palace records it. The overall level of tension can be pretty overwhelming at times, particularly when you’re getting close to story goals and the challenge jumps considerably.

Visually, the game is pretty wondrous, with Unreal 4 powered goodness making for some mighty fine eye candy. En’s spacesuit is going to make some cosplayers go bonkers because it’s incredibly ornate yet looks entirely functional. The Palace’s beautiful (mostly) white and gold furniture, shiny marble floors (with an optical illusion straight out of an M.C. Escher print) and ornate chandeliers give it the look of a massive hotel gone haywire. It’s a sort of much more massive Overlook Hotel in space, what with all the murderous intent going on once those Ens spring to life. The game does have some long loading times between areas, a few frame rate hitches and a few other technical hiccups that break the immersion a bit. But it’s something you’ll get used to (although a patch would help considerably). 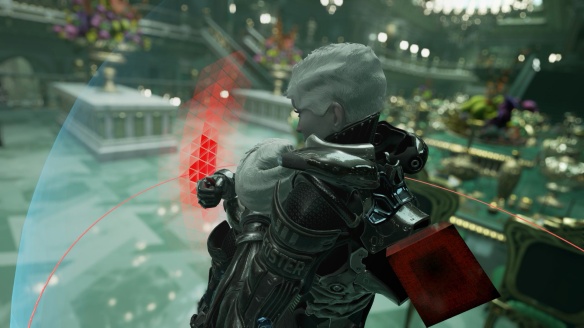 The game can be completed in 10-12 hours, but if you haven’t found everything there is to find on the first playthrough, you can access completed chapters and try searching for those goodies at your leisure. There are a few unlockables that make replays more interesting, but it’s up to you to do that hard work on your own. This is one of those games that works exceptionally well because it makes your brain work as hard as your fingers as you try and keep En alive and kicking (or pushing one of her doppelgängers over a gold railing. “Oops, but better her than me”, says En… right before the lights go out and pop back on with a few too many of her chasing after her looking for payback.

While I have no complaints about the pacing, I can see gamers more used to instant action from the get go feeling bored by the exposition and repetitive nature of the backtracking and “sameness” to the detailed visuals. This game won’t sway them much other than maybe to compliment the visuals. On the other hand, if you appreciate games that do things differently, ECHO will be right up your alley from start to finish. And oh yeah, that title screen is the best one I’ve seen in a while/ Or: yep, I sat around pressing the X button for about three minutes before I figured out I could move that eyeball around to access the menu. Oops  (on me!), but still brilliant stuff.