Sega, on a roll, II: While its appeal might seem to be more towards super-fans and younger gamers, Mario & Sonic at the Olympic Games Tokyo 2020 ($59.99) is quite a fun game overall for all ages. That said, you’d better have a few Switch controllers in tip-top shape and prepare to do a bit of of a workout with your fingers in some of the trickier events. 24 zippy mini-games are here with bright and colorful visuals and a soundtrack that’s suitably Olympic-sounding.

Nostalgic fans who may be a bit older or keen on old-school visuals will very likely love the retro 2D goodness found in the time traveling (via oddball game console trap) Tokyo 1964 storyline and its additional 10 events. The nice thing is the game lets you play through its story modes in order and also lets you have at it in any mini-games here if you just want to grab a few friends and family members (up to 8) and play together. Online play and cloud saves are of course, all aboard if you want to play with a few folks online. That said, it’s good to see the game supports couch play (something more games need).

While it’s kid-friendly, and only supports the less fancier means of control (well, Joy-Cons, motion controls, and some first and third-party game pads), the game doesn’t skimp on the challenge for new players in some events where every bit of precision counts. The 2D retro mode’s games are far easier, bit everything here is well done any guaranteed to get you grinning. You can stay on the couch, too in either mode, but prepare to work those controllers in some events where a bit of precise button pressing, some rapid jamming and other moves need to be pulled off. Notably, there are no voices for the characters outside some generic grunts, but there’s enough of a plot that ties things together if you’re into it and prefer not to skip through short cut scenes and dialog segments.

Featuring… a cast of DOZENS!

END_OF_DOCUMENT_TOKEN_TO_BE_REPLACED

So, it’s rare that I write about sports-themed games, so this one’s special on a few fronts. Now, I can’t say a thing until the embargo lifts, but I will reveal some facts about this Switch exclusive.

Mario & Sonic at the Olympic Games Tokyo 2020 will take to the starting blocks exclusively for the Nintendo Switch on November 5 in the Americas for $59.99 USD and November 8 in Europe with commensurate pricing. For more information, including where you can pre-order the game, be sure to visit the official website, and watch our latest trailer.

Uh, that’s all I got. No, seriously. The reviews are under embargo, so I can’t report anything until then Switch fans, sorry. That trailer and retro mode are nice additions, right? 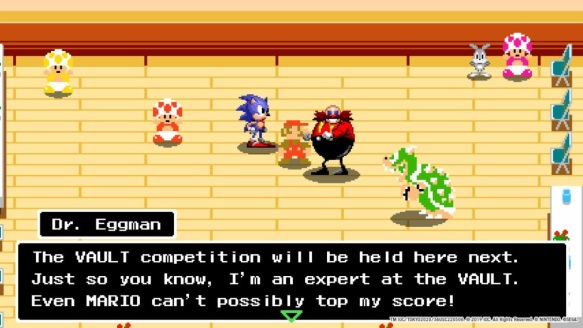