Sega, on a roll, II: While its appeal might seem to be more towards super-fans and younger gamers, Mario & Sonic at the Olympic Games Tokyo 2020 ($59.99) is quite a fun game overall for all ages. That said, you’d better have a few Switch controllers in tip-top shape and prepare to do a bit of of a workout with your fingers in some of the trickier events. 24 zippy mini-games are here with bright and colorful visuals and a soundtrack that’s suitably Olympic-sounding.

Nostalgic fans who may be a bit older or keen on old-school visuals will very likely love the retro 2D goodness found in the time traveling (via oddball game console trap) Tokyo 1964 storyline and its additional 10 events. The nice thing is the game lets you play through its story modes in order and also lets you have at it in any mini-games here if you just want to grab a few friends and family members (up to 8) and play together. Online play and cloud saves are of course, all aboard if you want to play with a few folks online. That said, it’s good to see the game supports couch play (something more games need).

While it’s kid-friendly, and only supports the less fancier means of control (well, Joy-Cons, motion controls, and some first and third-party game pads), the game doesn’t skimp on the challenge for new players in some events where every bit of precision counts. The 2D retro mode’s games are far easier, bit everything here is well done any guaranteed to get you grinning. You can stay on the couch, too in either mode, but prepare to work those controllers in some events where a bit of precise button pressing, some rapid jamming and other moves need to be pulled off. Notably, there are no voices for the characters outside some generic grunts, but there’s enough of a plot that ties things together if you’re into it and prefer not to skip through short cut scenes and dialog segments. 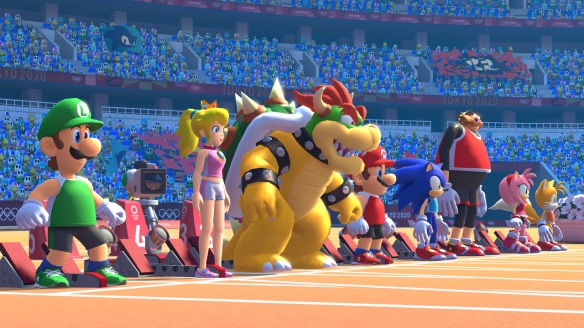 Featuring… a cast of DOZENS!

In terms of events, here’s what you get. 24 different characters from the many Mario and Sonic games, all excellently modeled and animated, competing in the following events:

Match of the century, until DK was found with bananas in his gloves and Bowser had his kid in another.

Plus, you get four new events:

I’ll admit to being awful at some of the timing needed in a few games (hey, I’m old!), but it’s a case where a chunk of practice helped out and failures were replaced by better scores and even a few medals. Some users may complain about a favorite character not being playable and more outfits to wear, or the game lacking deep customization elements. But you might see a few cameos here and there if you travel the game map and talk to everyone and as for the customization, I’d say, less menus, more playtime to any naysayers. I guess Sega can patch in outfit and or color changes if they wanted, but for my money, it’s fine as is.

I almost feel the need to ask Mario “Is  it SAFE?”, but maybe five people will get the joke.

You’ll also get the return of three “Dream” events which are whimsical, futurist fun (and definitely familiar on a few fronts):

As thrilling as the sports-based Olympic games above are, it’s easy to get caught up in these other three events and get roped into beating times and scores here. If Sega ever wanted to do some sort of fantastic future sports title, I’d expect there to be these three games and variant courses to make their appearance, maybe with an update to Cosmic Smash but with a Sonic theme? As I always say, we shall see. 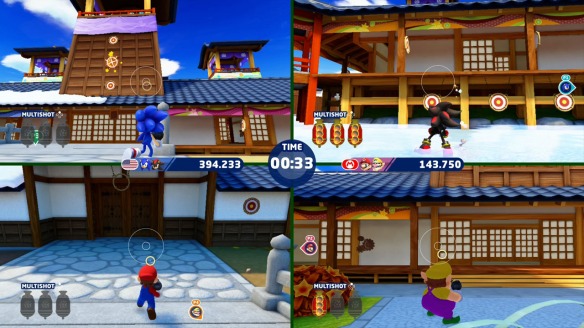 Happiness is a warm gun. Well, and a good score, too.

The ten Tokyo 1964 events are the following:

While both game modes are great, the 2D games look and feel nicely 8-bit (a better playing Track and Field, if you will). I liked the Marathon best, with Shooting, Judo, and the 10M platform coming in as other favorites. All the games are good, though, so your own mileage may vary. The big griper here is the game sticks to it’s 8 and i6-bit roots too hard, only including the basic models for Mario, Sonic, Bowser, Dr. Robotnik, Peach, and a handful of others. Less character models here certainly don’t mean less fun. though. The nice thing here is you can play in small segments or large chunks and the game will track everything you do online or off.

I should write more, but I’m currently paused to fished up this review and I have some records to set. Now, if you’ll excuse me… I gotta run.

A WINNER IS YOU!