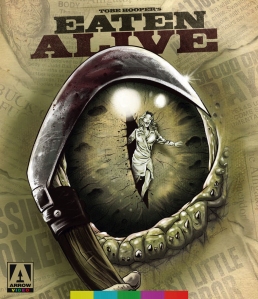 While The Texas Chainsaw Massacre was (and still is) a memorable horror film experience, Tobe Hooper’s follow up, 1976’s Eaten Alive (released in 1977) was and is memorable for entirely different reasons. While it’s got a compelling and frightening performance from Neville Brand and that bathed in red sound stage set makes the film even more frightening, there’s a “too many hands” feel to the production process that makes the film more of a “B” than it deserves to be. That said, it’s yet another excellently produced Arrow release that’s worth a buy for the solid 2K restoration job and copious special features as well as the chance to see a film you may not have heard of previously (or had forgotten entirely).

Then again, given the incredibly sleazy origins of the “allegedly based on actual incidents” story here, Eaten Alive also works quite well as a pure “B” flick. Running a tidy 87 minutes, no time is wasted here as Brand’s psychotic veteran motel keeper, Judd, kills off a local lady of the evening after a tryst gone wrong at a brothel nearby sends her scampering for the hills after the madam (Carolyn Jones) gives her the boot. Judd runs the Starlight Hotel (one of the film’s many alternate titles along with Death Trap, Legend of the Bayou, Starlight Slaughter and Horror Hotel) which also happens to have a live crocodile as an attraction living in a penned in “swamp” outside. You know that Judd and his “pet” are going to be pretty busy as the film progresses and the victims show up as if there’s a massive magnet yanking their cars in that general direction. END_OF_DOCUMENT_TOKEN_TO_BE_REPLACED

The fine folks at Arrow Video continue to whip out releases from their UK catalog through MVD to film fans and collectors stateside well worth buying and July’s three Blu-Ray/DVD sets are a nice trio for your library. This time, it’s an odd triple threat of 1970’s Japanese pop style, a bleak Gallic “spaghetti” western and a fun, funky horror film starring a pre-A Nightmare on Elm Street Robert Englund. That video below of Stray Cat Rock: The Collection should hopefully tease some of you into action in the form of adding it to your want list somewhere or bugging someone to get you it (or all three films) as a nice gift.

Well, I’D bug someone to get me all three of these flicks. Hey, I have unusual tastes in films from unforgettable classic silents to a handful of loud, noisy super-budget blockbusters more easily forgotten. I won’t knock your tastes at all (well, unless you still watch “reality” TV with a straight face and actually get upset at every VERY obviously scripted moment better done the first time and not the 500th). Eeek.