Well, I had a few minutes of free time this year. Emphasis on the HAD part. Then Capcom teamed up with Humble Bundle for a new version of their sale last year that swaps out some titles for some other cool stuff and slaps such a stupidly cheap price tag on all that stuff that it’s IMPOSSIBLE to pass up. Seriously.

Even if you didn’t play Remember Me (it’s fantastic), missed out on Lost Planet 3 (it’s MUCH better than the “my friend hated it” crowd says), Strider (also really good), or DmC (which some REALLY hated, but is still a blast if you go with it and just cut loose), paying a measly $15 for TEN games PLUS a few more FREE games next week, PLUS discount coupons on two more titles (one of them being the outstanding Dragon’s Dogma: Dark Arisen)?  That’s the definition of “no-brainer”. Which leads me to a Resident Evil joke I thought up this afternoon, but forgot by the time I got home because I was busy thinking of how to figure out when the heck I’d be able to play all these games.

But hey, that’s what backlogs are for, right? Riiiiight… *sigh*. SOLD. 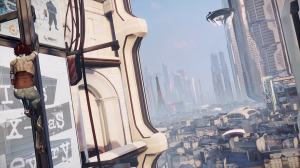 Of course, I had to run out early on Friday evening and zoomed past the UPS truck a block away that I SHOULD have hung around a few minutes to bug the driver about any packages that were mine on board, but, oh well. Anyway, Remember Me popped up again yesterday and I’ve been playing it since (which is why there weren’t a load of posts happening, folks). Anyway, it’s quite a blast and yep, a review is incoming probably tomorrow.  So far, it’s quite original, somewhat linear, but very gorgeous in a “this is the game you make when your studio is in Paris!” kind of way.

Back in a bit – spoiler: the score will be good unless the game falls apart in what looks like the last few areas I’ll be getting back to soon enough. As for “Other Stuff”, that’s not a game – it’s just my queue stacked up with a bunch of games I’ll try to get to before the E3 crunch steamrolls me…

Capcom, we love you like a long lost dog that’s been newly found in fine shape, but… you have to be a tiny bit more original with your promo video titles. That’s pretty much the sole negative thing I have to say about this look at the process of scoring the upcoming action adventure game developed by Dontnod Entertainment set for release in May 2013. I’m hoping we get the option of hearing both versions of the score, as it sounds pretty cool so far.  Hmmmm… Neo Paris, huh? I wonder if any Parisians not parkouring about the City of Light in 2084 are still going to get that two months paid vacation or whatever is is they enjoy.  Nice city, confusing navigating those districts if you’re easily distracted. I haven’t been there in ages, but I’ll get to take a virtual trip soon enough through this excellent looking game. Now, I want a good glass of wine, some nice Camembert and a hunk of good bread. Good Night…

And here I was thinking I was the King of Procrastination. Oh well, it’s nice to see more of this upcoming game from Dontnod Studios in France as well as Capcom testing the waters big time with such a promising new IP that looks to add a memorable character and story-driven gameplay experience to a very crowded market. I’ve got my eye on you Nilin! That May 2013 release won’t be forgotten, that’s for sure…

This one sounds pretty cool (and more than a tiny bit like Chris Nolan’s mind-bending film, Inception), so color me intrigued. Capcom dropped news on this upcoming game at GamesCom 2012 and it’s already getting a lot of buzz. Developed by Paris-based DONTNOD Entertainment, the game has you playing as a female “memory hunter” who can tap into people’s minds and steal or alter their memories. Of course, when someone has her memory stolen, our heroine sets out to find out who did it and as the press release says, “discover how she can change the world.” Expect a lot of athleticism, a bit of stealth and lots of ass-kicking in a few varieties in this third-person game set to hit PS3, Xbox 360 and PC in May 2013. More to come on this one, now that it’s on my radar…