One of the best blends of JRPG, humor and genuine challenge for the unwary player, Half Minute Hero finally hits the PC in a nicely buffed up version that rounds up all the content from the PSP while adding a really interesting cartoon art style (check out the YouTube video channel here) and of course, retaining the same lightning-paced gameplay from the portable games intact. BUY this game, I say, as it will make you laugh at the familiar tropes it pokes fun at while you’re getting creamed by some pretty pesky enemies. You need to pay attention, plan ahead and fight for time here as you try to make that 30 seconds count. Don’t play this on a laptop while traveling, however – people will think you’ve gone nuts when you start yelling at your screen and yep, the men in the white coats will follow soon afterward. 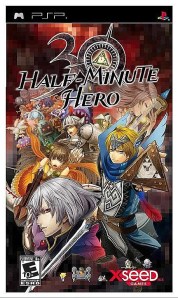 Xseed Games is at it again, folks. They’ve got a lot of nerve, ONLY letting us in on the cool official Half-Minute Hero web site on such short notice before its October 13 release date! Hmph… it’s as if they think their newest game is supposed to be some sort of riff on classic RPGs with rapid-fire 30-second battles and oodles of ridiculously addictive fun in single and multiplayer modes or something AND with a killer metal soundtrack to boot. Geez… darn publishers and their half-baked ideas!

Of course, I’m kidding about hating on Xseed, kids – go get a copy of HMH the half-minute it comes out, or you’ll be sorry! Oh… and get a copy of Ju-on: The Grudge as well – it’ll scare your Wii right off of its stand and right under the couch (along with you and the family pet)!

Xseed Games loves you, y’know – they just released the second of two demos for their upcoming PSP exclusive, Half-Minute Hero through the PlayStation Network Store and it’s a doooooozy. Fun and ridiculously funny, but it’s short and really cool to the point that you’ll break a nail or something after playing it so much. Xseed is of course, hugely unapologetic about your busted fingernail and has released the following statement:

We are excited to release the second of two downloadable demos for our upcoming hi-speed RPG, Half-Minute Hero. This demo will feature Evil Lord Mode, a real-time strategy game where players will take control of the powerful, and obnoxiously gorgeous, Evil Lord.

In this mode players must summon monsters to fight enemies.

Summon monsters are divided into three types: Brutes, Nimbles and Shooters. Enemies are also divided up into the same categories. Each type of monster or enemy has advantages/disadvantages towards another type of monster or enemy. Figuring out the best strategy to use against each type is the tricky part. When the time limit reaches zero, the reign of evil is over.

See? Totally unapologetic! Anyway, go download the demo and try the game out – keep the Band-Aids handy just in case your nails are weak (more calcium and natural gelatin in your diet helps, as well). Half-Minute Hero will be released in October 2009 at retailers across North America.

The first of two demos for Xseed’s upcoming lighting-paced retro PSP Action/RPG is now available for download over the PlayStation Network, which leads me to ask why you’re still reading this when you should be playing this rather hilarious bit of gaming goodness. So, go download away onto your PSP (you DO own a PSP, right?) and play it to death in half-minute chunks, laughing crazily as you skip out the door a few minutes later to go preorder from wherever you normally get your games.

Or pre-order HMH online, if that’s your thing. Heck, it’s not like you’re getting much exercise these days, anyway. A little sunlight won’t kill you, y’know… Well, that’s what I’ve heard… *Ahem,* anyway, let’s see what the official press release says:.. END_OF_DOCUMENT_TOKEN_TO_BE_REPLACED