Here’s a ride worth taking.

Now, this was pretty cool one, and not a “honk” in sight. 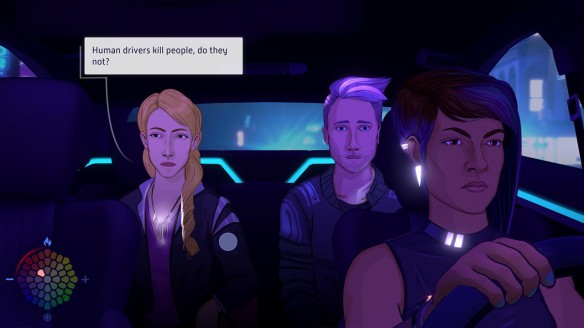 Chance Agency’s excellent “survival adventure” game Neo Cab  (also on Switch and Apple Arcade) feels to me like what would happen if the classic cyberpunk FASA game series Shadowrun got a first-person expansion focusing not on weapons or magic, but a human taxi driver who just took mostly normal and a few tech-enhanced passengers where they needed to go, listening or responding to their mundane stories along the way.  There’s also a smidgen of a more recent game Night Call, minus the murder investigation aspect to contend with (there’s a taxi accident mentioned a few times that occurs off-screen integral to the plot, but the Teen-rated game doesn’t feature any violence). The people you meet as pax (passengers)  here are a pretty interesting (and well-written) sort where if you have time over the game’s six-day period, you’ll want to pick a few up multiple times in order to find out more of their stories.

There’s replay value here because the game’s main story only lasts about four or hours and intentionally limits pickups to three (or four in cases where you decide to take a chance on an extra run) a day. Granted, the plot threads all link up at some point, but it’s impressive to see how it all comes together even if the finale tends to be a bit of an anticlimax on one front when compared to the bulk of the game. It’s not a bad ending, mind you. It just forces a particular choice at you until you pick what seems to be closure for some characters. While there’s no voice acting here, most of the “acting” here is nicely mimed and/or conveyed through what’s seen on-screen.