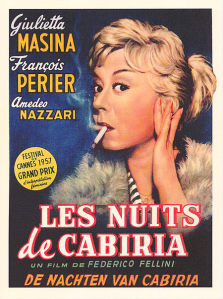 The first time I saw Nights of Cabiria, I was wide awake and it was the middle of the afternoon, but I was so wrapped up in watching Giulietta Masina’s spectacular performance that I’d stopped reading the subtitles and missed a chink of the story. Of course, this being a Fellini film, the visuals and expressive acting spelled out most of what happened and Masina’s work as a happy go lucky hooker with a head of stone and dreams of finding love kept me entranced until the ending.

I’ve seen the film quite a few times since and have introduced it to friends with no explanation because how do you properly describe a film about prostitutes that manages to be funny and sad and human all at the same time without getting wrapped up in someone’s “Uh, so… it’s a movie about what?” eyebrow. Granted, you can always take the easy way out and make it a double feature night with Fellini’s La Strada first, as like this film, it won an Academy Award for Best Foreign Film and has Giulietta Masina giving another performance for the ages. That SHOULD wipe away any smudgy thoughts about pedigree and content.