As a well-aged (I prefer the term “vintage”) fan of old school dungeon crawlers, I knew Vaporum ($24.99, worth every penny) was going to be right up my alley. With its dark thematic elements, Dungeon Master meets BioShock vibe and plenty of play and replay value, the very worst thing that I could think of as I sat down to type out this review was simply only being able to get through the game once for this post and having to move onto something else thanks to my stupidly large backlog.

The team at Cypronia has converted developer Fatbot Games’ stellar PC game into a mostly excellent home console version and yes, when I say home console, I kind of mean it. While you can indeed take this on the go as a Switch owner, you’ll have to deal with somewhat smallish onscreen text and controls that can be a bit complex as they’ve been translated from keyboard and mouse to a controller with a lot less buttons to operate. Everything works as it should, but there are a few fiddly moments that require a trip to the options screen to adjust things to your preferences. 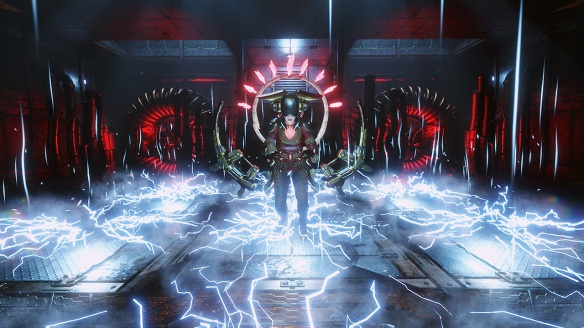 Shocker! Just about everything wants you dead in this game – expect traps and tricks galore as you get deeper into the thick of things.

Personally, though – this is exactly the sort of game you’ll want to play while socked away on a rainy vacation at home in front of the TV in docked mode. That way, you’re all into the visual and aural experience (the game both looks and sounds fantastic) and not having to be interrupted by outside distractions such as some kid walking up to you and asking “Hey, is that a Switch? Can I play, please because my mom won’t let me take mine outside and… blah de blah, blah, blah..” (true story, that). This is the sort of game where concentration, planning and execution are all urgent forces vying for your attentions.