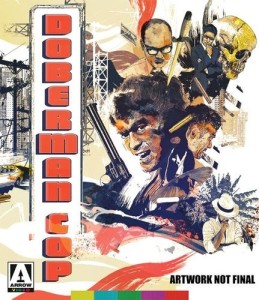 You may (or may not) confuse Doberman Cop with Wolf Guy for some reason and nope, I’d not fault you one bit if you haven’t seen either film and draw that incorrect conclusion. The former film has nothing to do with the latter other than both films were adapted from popular manga and greatly transformed as a result by their respective writers and directors.

In the case of Kinji Fujusaku’s 1977 flick, it’s a far better made movie once again featuring Shinichi “Sonny” Chiba doing his own stunts, loads of violence (but less nudity) and a weird dip into supernatural detecting as a means of solving a series of serial killings. While crackling with a crazy energy, there are a few logic gaps if you pay close enough attention between Fujisaku’s trademark hard-boiled violence that don’t harm the film, but the narrative suffers as a result.